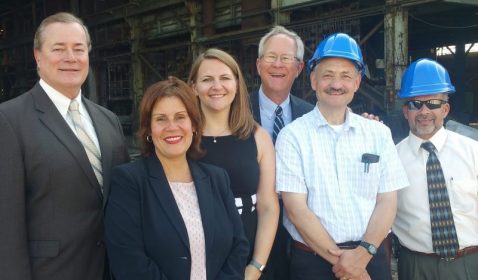 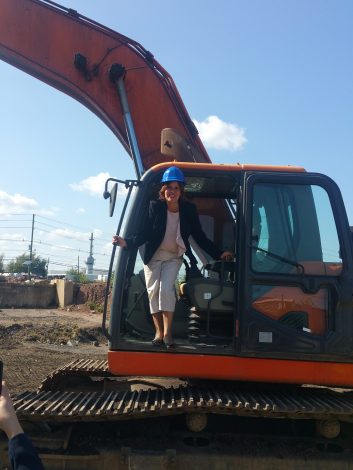 Demolition is under way as the former ASARCO property in Perth Amboy is cleared for an additional 1 million square feet of modern industrial buildings.

Perth Amboy Mayor Wilda Diaz kicked off the razing Aug. 30, marking the start of the second phase of the Bridgeport Logistic Center, which “will transform a portion of Perth Amboy’s historic shoreline from contaminated Brownfields into a state-of-the-art industrial complex providing great jobs and a stable tax base for the community,” Diaz said.

Among the many daunting challenges were removing 14,000 shipping containers, rebuilding a cell tower and raising the site to post-Sandy flood elevations.

Bridge Development has invested $180 million for the construction of three warehousing and distribution facilities totaling nearly 1.3 million square feet where Target has established its first distribution center in New Jersey.

“We are extremely excited to finally begin to move forward with the second phase of our Perth Amboy project. The Phase 1 buildings are nearing completion, are already over 55 percent leased and employing a large number of Perth Amboy residents,” said Jeff Milanaik, principal with Bridge Development Partners. “It is wonderful to see the transformation of once blighted properties into a new economic engine for the city of Perth Amboy.”

Totaling 190 acres, the Bridgeport Logistics Center is north of the 440 Outerbridge Crossing connecting Staten Island and the New Jersey Turnpike. It also borders the Arthur Kill, a major navigational channel for the Port of New York and Newark. Several waterfront tenants will remain at the site to serve marine uses.

The site was a smelting and refining facility for 80 years, owned and operated by American Smelting and Refining Co. Since closing in 1979, many tenants and environmental issues prevented redevelopment of the site. CDC acquired the site from ASARCO in 2009.