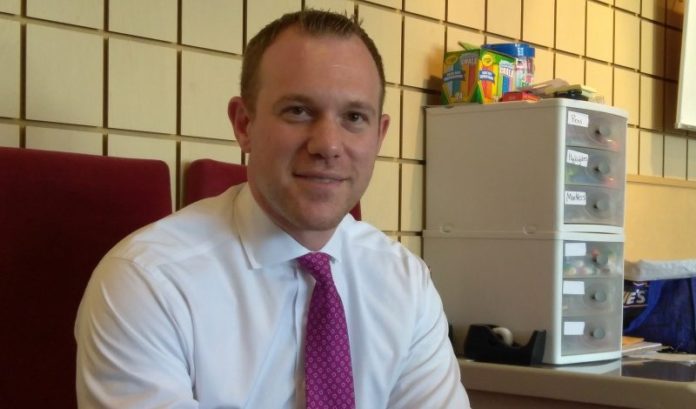 Atlantic City lost its biggest supporter in the state Senate last month with the death of Jim Whelan.

Now, as the struggling city prepares for a long-sought financial turnaround, the man he introduced to politics takes over his seat in the Legislature with an eye on diversifying business and focusing training on the jobs that will be opening up.

The Atlantic County Democrats unanimously chose the former Atlantic County freeholder to fill the vacant seat ahead of the November election, in which he is running against Republican Chris Brown.

“(Whelan) was my political mentor,” Bell (D-Northfield) said. “I’m just going to try to do the best that I can to carry on his legacy.”

An Atlantic City native with a now-retired casino employee father and a mother who is a nurse at the city’s hospital, his ties to the Shore town are deep.

“Atlantic City is the economic engine to the area,” he said. “My No. 1 goal is to help turn the economy around down here and create more good-paying jobs.”

He said the casino industry must be protected, but he knows stopping North Jersey casinos doesn’t stop competition from other states. Instead, the area needs to expand in the areas of aviation and agriculture, he said.

A bill Whelan sponsored in January calls for incentives for qualified businesses in Garden State Growth Zones, along with establishing a zone in and around the Atlantic City International Airport.

“That will help us attract other business and spur development,” Bell said.

This could in turn open up job opportunities for workers that already have the skills necessary for aviation, he added.

The civil attorney talked of a client who took his skills as an airplane mechanic to a job working high-tech security in a casino.

With aviation growth, those who worked similar jobs in the casino industry could have options there, he said.

“We also need to do more to promote our agricultural activities,” Bell said. “We are the Garden State.”

Bell first ran for Atlantic County freeholder in 2011, just after his son was born. The county was last in the state for children’s well-being, according to the Kids Count survey that year.

Whelan told him to try to change things from the inside. Bell lost that year, but won the next.

Bell has spent much of his campaign meeting with various businesses, including South Jersey Gas, which is part of the new Atlantic City Gateway Project that will include a Stockton University campus.

As the workforce for utilities ages, there are few trained to fill those positions, he said, adding that South Jersey Gas is looking at public-private partnerships with other utilities.

“We could utilize our community college to do some of that vocational or professional training,” Bell said.

The state’s stake in the city is also an issue.

While Bell said there is no question the city needed the help and to right-size its budget, “I would not have done it that way.”

And in his years in politics, he said he’s never gotten a call from political powerbroker George Norcross III, whose picture with Whelan at the Wonder Bar in Atlantic City last year got tongues wagging about what it meant and who’s really in charge.

“I think they’ve kind of turned him into a boogeyman,” Bell said. “This whole idea that he tells us what to do or that he’s this political boss is a myth.”

He knows about political bosses from the state’s history, he said, pointing out that his father-in-law is Atlantic County Superior Court Judge Nelson Johnson, author of “Boardwalk Empire.”

The tale of “Nucky” Johnson — no relation — was so dramatic that it was turned into an HBO series with Steve Buscemi in the fictionalized role of the renamed Nucky Thompson.

“(Norcross) is not the Nucky Johnson of Atlantic County, as far as I know,” Bell said. “And I think I would know.”