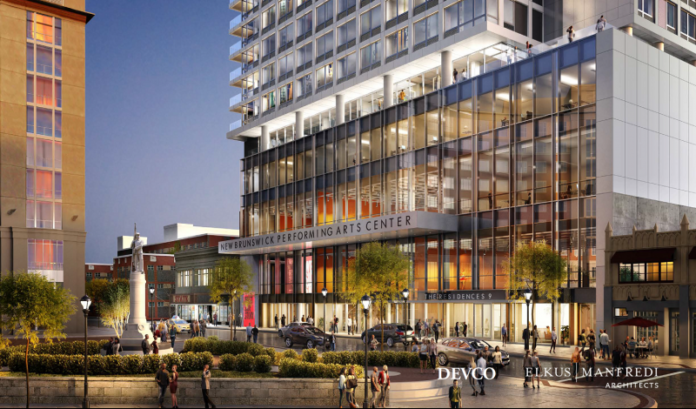 Chris Paladino sums it up this way: New Brunswick’s ability to land a state-of-the-art $171.8 million performing arts center — one of the biggest public-private partnership deals in state history — is aided by government’s ability to be flexible and helpful when it comes to financing.

“This is one of the things we have going for us in New Brunswick that separates us from other places,” Paladino, the president of the New Brunswick Development Corp., told ROI-NJ. “We are aided by institutions at a variety of levels, from state government to the county, to the city to a group of nonprofits, to Rutgers. We get them all on the same page so that they do what they need to when they need to do it.

“I think it is a testament to the process that has been going on in New Brunswick for 25 years.”

Paladino said there will be a groundbreaking ceremony Oct. 4, with a completion date set for the summer of 2019.

“We have to be finished by July 28 of 2019, so we’re building somewhere in the neighborhood of 350,000 square feet in a relatively short period of time,” he said.

Here’s how Paladino and DEVCO got the financing to do just that:

The center will be developed with a ground lease from the city of New Brunswick and includes $60 million of arts infrastructure. This component of the overall redevelopment initiative is financed through various funding sources, including cash contributions from various partners, tax-exempt bond proceeds and utilizing state and federal tax credit programs.

The owner of NBPAC, Cultural Center Redevelopment Associates Urban Renewal LLC (a partnership between Devco and Pennrose Properties), received a $40 million ERG tax credit award from the New Jersey Economic Development Authority. These credits have been monetized using 10-year tax-exempt bonds issued by the Middlesex County Improvement Authority with a guaranty from Middlesex County. Devco leveraged the AAA bond rating of Middlesex County to secure at a 2.29 percent interest rate. The payment of the debt for this bond issuance will be the annual purchase of the state tax credits by Investors Bank, Citibank NA and AEGON.

Redevelopment Area Bonds were issued by the city of New Brunswick at a rate of 3.83 percent. This 30-year, tax-exempt general obligation bond issue will use future PILOT payments from the residential tower in order to pay the bondholders.

Rutgers University provided a capital contribution as a membership purchase interest into the owner partnership of NBPAC and will utilize the theater spaces for various programs for the Mason Gross School of the Arts, including opera, dance and musical theater.

The New Brunswick Cultural Center contributed funds to the development of NBPAC that include a $6 million grant secured from the Middlesex County Cultural Grant Program.

Capital One will be the buyer of the federal tax credits, with New Jersey Community Capital, RBC and Building America (AFL-CIO) CDEs providing tax credit allocations to the deal.

The office component of the project sits directly on top of NBPAC and will be owned by Middlesex County. The County will enter into a Development Services Agreement with the developer of the project and will own the 37,000 square feet of office space upon the completion of construction. This office space will allow for the co-location of a variety of arts and cultural organizations.

The Middlesex County Improvement Authority received an allocation of tax-exempt, private activity bonds for the residential component of the project. Citibank N.A. originated a tax-exempt construction loan at a rate of 4.73 percent and will convert to a permanent mortgage loan, funded by the proceeds of the sale of the bonds. The bonds received a rate of 3.54 percent and are credit enhanced by a Pillar Financial/Fannie Mae mortgage-backed security, issued as tax-exempt bond collateral.

Equity provided by the owners of the residential tower.

Located adjacent to the tower, the parking garage includes 344 spaces and will be funding through a 30-year bond issuance from the New Brunswick Parking Authority with a guaranty from the city of New Brunswick and received a 3.87 percent interest rate.  Included within this structure is a lease with the American Repertory Ballet.

The center will go up across the street from the Heldrich Hotel, on the land that currently houses the George Street Playhouse and the Crossroads Theatre. Those two companies will be joined by the American Repertory Ballet and the Mason Gross School of the Arts at Rutgers, Paladino said.

Paladino said the nature of the project helped create the variety of financing.

“It’s a little unorthodox,” he said. “I think it would be virtually impossible for a private company to do what we were able to do. But, because there’s a public policy purpose for the project, we were able to do it.”

“You have to bring it together and get it done,” Paladino said. “There are always a couple of sleepless nights and moments of holding your breath, but everybody came around.”

Applications, enrollment, housing all up — big — at Stockton University