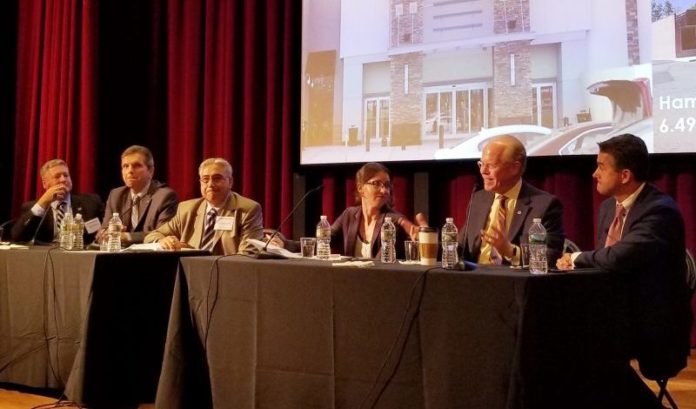 Amazon is the crown jewel that everyone is after.

But Anthony Marchetta, executive director of the New Jersey Housing and Mortgage Finance Agency, believes the state lacks adequately affordable housing offerings to be in the running.

Marchetta spoke on a panel with several other commercial real estate and planning experts, along with surrogates for the Democratic and Republican gubernatorial candidates, at PlanSmart NJ’s New Jersey Planning Summit 2017, held Thursday at Bell Works in Holmdel.

Gerry Scharfenberger, director in the state’s Office for Planning Advocacy, and surrogate for the day for Republican candidate Lt. Gov. Kim Guadagno, said he had a meeting Tuesday with Choose New Jersey and the state Economic Development Agency about Amazon’s request for proposals for its second headquarters in the country.

The meeting focused on how to handle the RFP and all the calls Scharfenberger is getting about the perfect new location in New Jersey for HQ2.

“There are 565 municipalities, and 565 perfect locations for Amazon — I can’t believe it,” he joked.

But one of the things that did come up in the meeting was the need to keep incentive programs in the state to help attract companies like Amazon, Scharfenberger said.

“I think it’s important that we keep these programs healthy and bright,” he said.

But Marchetta believes the New Jersey real estate market’s shortage of housing that prospective workers could afford is likely to deter the e-commerce giant — which already has distribution centers around the state.

“Amazon is certainly the jewel that everybody wants to have. But I’m a little disappointed that you said you had (a meeting with) Choose New Jersey and EDA,” he said. “I think what they’re looking for, from what I’ve seen, is a live-work environment. You’ve got to incorporate housing in that. Housing that could be affordable, through every level of the spectrum that’s there. It’s an element that we’ve ignored when we’ve gone after major users like Amazon.”

He recalled a similar missed opportunity for housing when the state was bidding for the new location of BlackRock Financial Management.

“They ended up in West Windsor, rented a facility — very different from what they requested,” Marchetta said.

He fears the same will hold true for Amazon.