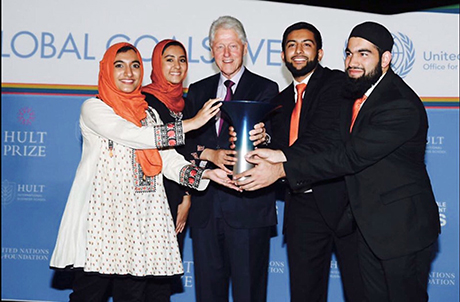 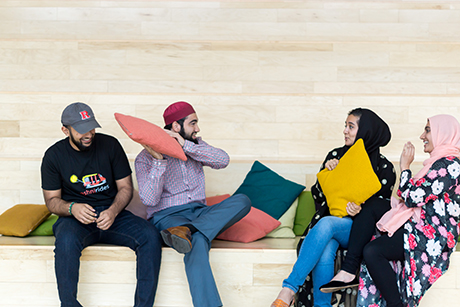 A Rutgers Business School team’s transportation plan to return dignity to millions of refugees garnered it the $1 million Hult Prize for social entrepreneurship this weekend.

The prize is often referred to as the Nobel Prize for students.

The four-person team beat out finalists from Harvard University’s Kennedy School, the Instituto Tecnológico Autónomo de México, the University of Waterloo, the University of Calgary and York University. The students were the first Rutgers team to make the finals, beating out 50,000 participants from more than 100 countries.

Roshni Rides — using the Hindi word for light — uses existing rickshaws and their drivers, preloaded transaction cards and ride-sharing to create “a transportation network that connects refugees to critical resources and opportunities,” senior Gia Farooqi said during the team’s presentation.

She, along with new graduates Hasan Usmani and Moneeb Mian, as well as alumna Hanaa Lakhani, found that 2 million rickshaws in Pakistan were underutilized — including most pickups having just one rider, leaving three seats empty — even though their research found that 80 percent of refugees want to go to the same locations.

They used surveys to set a schedule based on demand, fleet size and number of pickup locations, and encouraged ride-sharing, then conducted a two-month pilot in Orangi Town, Pakistan, home to 2.5 million refugees.

In that time, more than 130 riders cut their transportation costs by 53 percent, while the income of the four drivers increased by 27 percent.

“It’s as convenient as a bus ticket,” Mian said. “It’s as simple as scan and go.”

Business projections showed the group breaking even by the second year. By Year 5, there will be a $5 million profit while impacting 2.2 million refugees with 1,200 rickshaws, Lakhani said.

“It will have a big impact,” said former President Bill Clinton, who announced the winning team.

The four members are all children of Pakistani immigrants and refugees.

“This is very personal for us,” Farooqi said.

The team will use the prize money to continue to build Roshni Rides and explore the possibility of using rickshaws powered by electricity rather than natural gas.

“We are thrilled by their performance, and we will continue to cheer them on as they build Roshni Rides into a global venture,” said Rutgers Business School Dean Lei Lei.

When it made the regionals, the team had to move quickly, putting together a crowdfunding campaign to raise $30,000, the pilot program and an eight-week immersion at a Hult-run startup accelerator.

Usmani and Mian were on the verge of graduating, and Lakhani already was working full-time in New York City.

“We were building a company from scratch,” Farooqi said. “It’s the hardest thing I’ve ever done, and we all learned our potential is limitless.”

Team members had to make changes to their initial plans, including dropping a solar component that became too expensive and disruptive.

“At different stages, we faced different situations,” Mian said. “The solution was always the same, trust the team.”