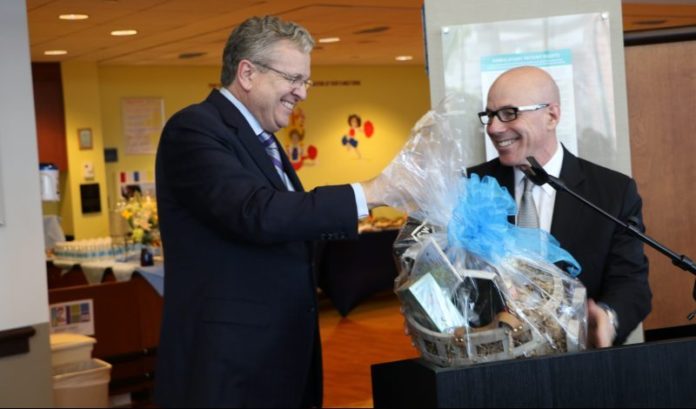 The merger is one Kennedy desired, and was done out of an interest for the future rather than necessity, according to Kennedy CEO Joseph Devine.

Changing demands in the health care industry, and the significant capital investments required to redevelop infrastructure would stress Kennedy’s finances, he said.

“We didn’t really need a partner, we were looking at the future of the industry,” Devine said. “We knew that there’s going to be more pressure on reimbursement, more pressure on levels of services, and, candidly, we wanted to make sure we had the right future for our organization.”

The merger is the first for a Philadelphia-based provider in South Jersey, adding three hospitals to Jefferson Health’s network of more than a dozen facilities, but it is not the first of its kind between New Jersey and Pennsylvania organizations.

There are also a number of other cross-border relationships in the state.

Atlantic Health and Hackensack Meridian Health are part of a multisystem group purchasing organization, AllSpire Health Partners, based in Pennsylvania. The Children’s Hospital of Philadelphia, or CHOP, has partnerships with multiple New Jersey systems, including AtlantiCare, RWJBarnabas Health and Virtua Health. And Penn Medicine has relationships with Shore Medical Center and Virtua Health.

The proximity of health facilities in southern New Jersey and Philadelphia translates to residents often crossing state lines for care.

In a study of the outmigration for services that Kennedy doesn’t provide, the system noticed many went to two Philadelphia providers — one of which was Jefferson Health, Devine said.

The systems already partnered on neurology, oncology and orthopedic care, and Kennedy will benefit from the merger with expanded services in some of those areas based in New Jersey.

But things that Jefferson excels in providing, such as transplants, will remain in Philadelphia for New Jersey residents to access.

Jefferson’s telehealth system will be rolled out in Kennedy, to supplement what Devine called strong primary and tertiary care services.

And, as progress in the health care industry creates a need for innovation, Kennedy is positioned to benefit from Jefferson’s strong innovation arm, including access to clinical trials.

The systems have not revealed the renaming, if any, of Kennedy’s sites, but have a logo unveiling slated for Oct. 4.