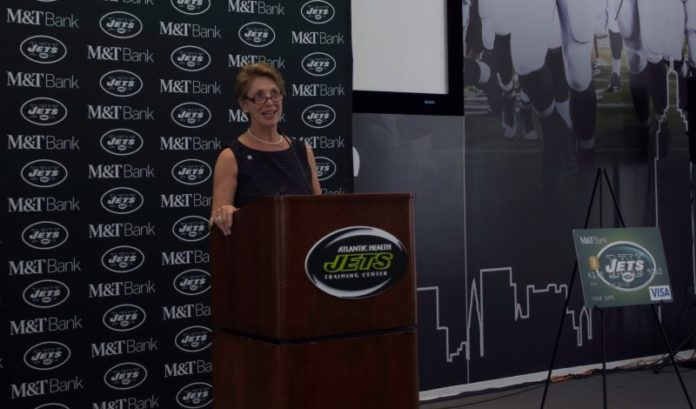 When the New York Jets and M&T Bank began talking about a business partnership months ago, they started with the traditional items a sports team and a bank could work on together: signage at the stadium for the bank; branded debit cards for the team.

Both sides, however, told ROI-NJ, they wanted to be more civic-minded and reach fans and customers on a different level.

“How do you get out in the market, into the community and do good?” Tom Comiskey, regional president-New Jersey for M&T, said at the announcement Tuesday afternoon.

That push led to creative ideas, such as a small business showcase that will be sponsored and run by both organizations.

The showcase will give participating small businesses an opportunity to present a pitch in a “Shark Tank”-type fashion, in an effort to receive a season-long sponsorship from the Jets with unique assistance from both the franchise and the bank, said Jeff Fernandez, vice president of business development + ventures for the team.

“It’s a concept that we worked on together during our discussion on whether a partnership made sense or not,” he said. “In the end, we know how competitive it is, especially for small businesses, to survive and thrive. And, for a lot of them, if they had that little extra piece of guidance or consultation or opportunity or seed money, it could really make a difference.

“I think the capabilities of the Jets and M&T, from brand marketing to financial guidance and business development, to how you bring products to market, are invaluable to small businesses. A lot of that experience helped us create this idea.

One small business will earn a $100,000 sponsorship deal with the team, one that enables the business to get use of the Jets’ marketing strategies as well as have meetings with M&T about the structure of its company, Fernandez said.

The partnership is a six-year deal, M&T Bank said.

But it’s not your typical partnership. It is the way the philanthropic side of M&T Bank likes to interact with the community, Comiskey said.

“We’re not the organization that is just going to write the check and walk away,” he said. “We’re sitting in that room and we’re saying, ‘We want to make sure our employees are going to be out in the community and helping.’”

Comiskey said the deal is a perfect fit for M&T as it builds its relationship with communities and institutions in the state.

“As a bank, when we think about our community involvement, it’s about different pillars,” he said. “For us, it’s about arts education and we’ve done work with (the New Jersey Performing Arts Center) and others. It’s about education, and we had a major program with Rutgers and supporting their community college business case competition and that went very well.

“The third pillar is sports. We had been looking for something that made sense for us. When we were approached with this opportunity, it was just a no-brainer.”

The deal has a long reach:

Both organizations stressed having an impact in the business and social communities around the state was key.

“There’s clearly a goal of generating revenue for the organization, but there’s an intangible component of a relationship that helps us in the market,” Fernandez said. “We love to differentiate ourselves from the other football team in town, from the other sports teams in town. We are, by nature, different. How we were born, where we were born, what we stood for then, what we stand for now.”

“We’ve seen it from Day One in New Jersey with the J&J family being based here in New Jersey,” he said. “I don’t want to say it was a specific strategy, but it came naturally, because we are based here and it is our true headquarters. We saw there was a natural attraction to be able to put together some things with New Jersey companies.”

M&T Bank, which began making inroads in New Jersey in 2012 with the purchase of Hudson City Savings Bank, said the deal helps it increase its presence in the way it wants to — at the community level.

Noel Carroll, senior vice president and retail market manager for M&T, noted that the Pop Warner organization had 17 leagues in areas the bank already is established. Helping those leagues, he said, is a natural for the bank at the branch level.

“We’re trying to elevate the branch manager in sort of ‘back to the future,’” he said. “To elevate their role in the community.

“The type of person we put into that role has got to be community-minded and involved in local boards, out on business calls. A lot of banks don’t do that anymore. We put a lot of effort into selecting and recruiting branch managers. We’re going to end with a nice model of branch manager who can be advocates for what we want to achieve.”

This deal, Comiskey said, will provide many of those opportunities.

“The one thing about this partnership is that it has so many different tentacles,” he said. “Kudos to our team and kudos to the Jets for figure out so many things where we can do good in the community.”

Why Evergreen Fund sets N.J. apart — and could set up...