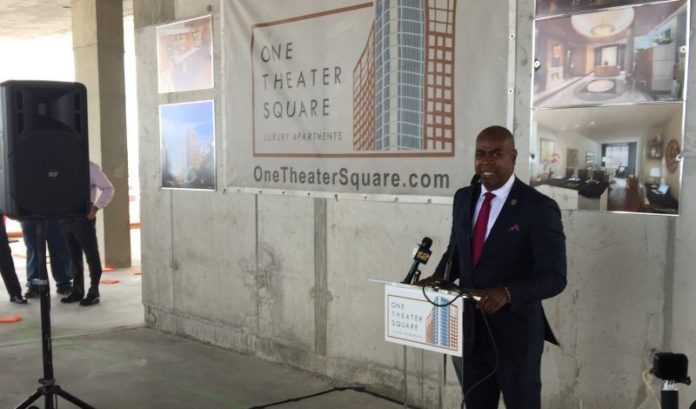 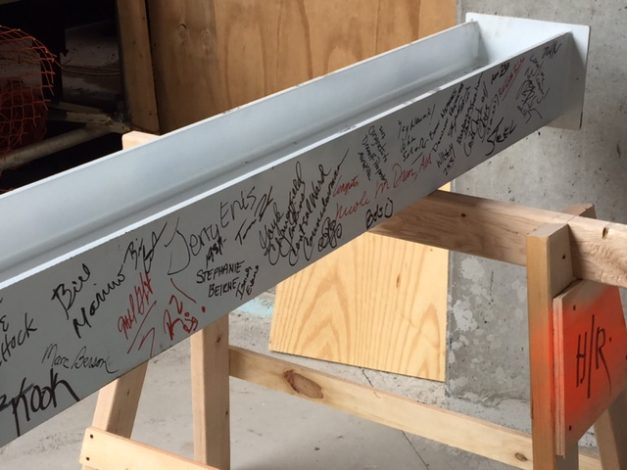 For Newark Mayor Ras Baraka, the only thing more exciting than talking about another milestone in the building of One Theater Square is talking about what’s next to come in downtown Newark.

“We’re trying to create a neighborhood,” he said. “Nobody has ever lived downtown in the history of the city. So, this is the first time we’re going to get to make downtown a neighborhood.”

Baraka, speaking at the topping-off ceremony for the project, said the building will help bring what he said Newark needs most: downtown residents.

“We have about 5,000 units of housing in the pipeline,” he said, rattling off projects such as Rector Street, Bears Stadium and the Four Corners development that are going up around the city.

“I still think that’s not enough.”

One Theater Square is a great start.

The joint project of Dranoff Properties and the New Jersey Performing Arts Center will include 245 apartments, 12,000 square feet of retail and 285 parking spots.

The $116 million project is yet another building block of downtown Newark in its recent history, joining Military Park and the Haynes Building project (which includes a Whole Foods), not to mention the new Prudential and Panasonic buildings.

One Theater Square, Baraka said, is truly changing the landscape.

“It’s the first skyrise development the city has had in 50 years,” he said. “And it will have market rate housing the city couldn’t have handled even five years ago.

“That sends a signal to all of the developers that Newark is ready.”

“We have to recreate some vibrancy downtown,” she said. “We have to increase our middle class. This will do that.

“There are people who live in Newark now who will take advantage of a place like this.”

Carl Dranoff, CEO of Dranoff Properites, and John Schreiber, CEO of the NJPAC, feel the building will sell itself as it has the amenities urban-seeking residents are after.

There will be an elegant lobby with a 24-hour concierge, not to mention a billiards room, fitness center and a yoga room. In addition, there will be an expansive outdoor entertainment space with seating, televisions and a fire pit.

Dranoff said leasing opportunities will become available in the spring. Pricing has not been set, he said.

Chaneyfield Jenkins said the building is a perfect fit for the next generation of Newark.

Baraka is eager for more.

And he’s confident it will happen.

“More residences, more retail, more hotels are coming to help create the type of density this area needs,” he said.

Projects such as One Theater Square draw the interest of other developers, Baraka aid.

“The trick is to get the developers to see that their projects don’t hurt each other, but that they complement each other,” he said. “That’s what we’re trying to do, get them out of this competitive thing and get them to say, ‘This is the way we are going to develop downtown.’”

Schreiber, deflecting credit away from himself, said Baraka and the city deserve a lot of credit for getting One Theater Square, which had been on the drawing board for more than a decade, to the finish line.

“I tell this story about once a week,” Schreiber said. “It was a very delicate capital stack that made One Theater Square possible, and Carl was the maestro, but, in my mind, the lynchpin throughout was always the mayor and the city’s commitment.

“The city made a contribution to this building that was indispensable. And the mayor, who is always pressured to take valuable, precious city funds and put them in the best important place, was steadfast. He never wavered and for that we will always be grateful.”

Dranoff went out of his way thank the workers, who joined in the celebration.

“In construction terms, the topping-off is when the topmost point has been reached and the last steel beam has been placed,” he said. “Today, we celebrate this milestone by honoring the men and women who got us here: the ironmen, the carpenters, the teamsters, the plumbers, the electricians, the laborers, whose blood sweat and tears went into this job every day.”

Throughout the day, the workers signed the symbolic final beams, which will top the project.

Dranoff pointed out the 90-person construction crew will increase to 200 in the coming weeks and months. He also noted that many are Newark residents themselves.

“That was very important … to have Newark residents working here at One Theater Square,” he said.