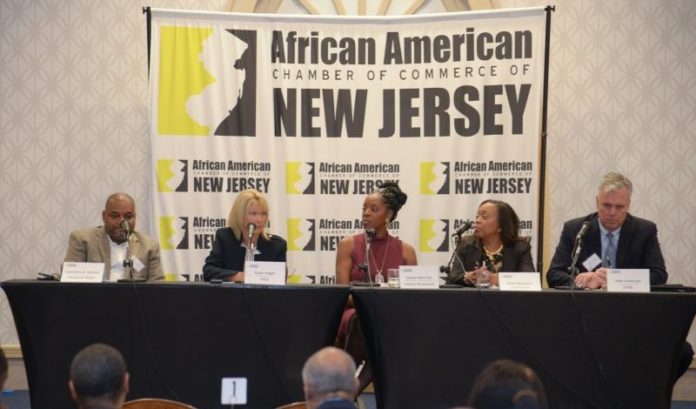 Working with minority-owned suppliers and vendors is a focus for many large companies in the state, but there sometimes aren’t enough qualified small businesses to partner with.

At the African American Chamber of Commerce of New Jersey’s 10th anniversary event Thursday in Newark, President John Harmon said the chamber has been creating relationships and advocating for its members — but it isn’t a lottery system, as some may perceive.

“The day is about fostering relationships to do business,” he said, indicating tables where companies were set up to chat with, and potentially match with, interested vendors.

“This is not the lottery, where you take a chance and hope you can win,” Harmon said. “We set the table. If you’re not certified, you can’t even talk to these folks. Not being disrespectful, because you don’t have the right ticket to the dance. Don’t be mad. My job is to get you to the table, and you got to show up and show out.”

Harmon has previously said the chamber has traditionally been challenged by a lack of interest from the community in becoming members.

Newark Mayor Ras Baraka, who also spoke at the event, said African-Americans and people of color, generally, are still low in numbers in public sector businesses in the state.

With the city’s new push for anchor institutions to hire locally, if they reach 100 percent of procurement from the city, it would still only be about 35 percent of the population.

Which means more businesses need to open up in Newark, Baraka said.

Five large companies in New Jersey — one of which is headquartered in Newark — that focus on supply-chain diversity were at the event Thursday: American Water, Public Service Enterprise Group, Johnson & Johnson, United Airlines and Jersey Central Power & Light.

Representatives spoke about Harmon’s advocacy for chamber members, some of whom are currently being vetted by the companies, and what each company needs from minority-owned businesses.

Lawrence Wooten from American Water, which is set to open its headquarters in Camden next year, added that just creating jobs for minority-owned businesses is not a good business decision.

If the business costs 10 percent more, it doesn’t mean the company hiring it is actually doing the right thing.

“When you want to build sustainable relationships … what is the value that that diversifier is bringing to the table? It has to be more than just the right thing to do,” he said.

Wooten added that, with the tax incentives to relocate the headquarters, American Water is certainly on the line to hire locally, and he is focused on being held accountable.

As Harmon indicated, sometimes unqualified companies come knocking on the door. It’s a challenge for an entity like American Water, which deals with a number of quality and safety concerns in its line of work. As a result, there aren’t necessarily very many suppliers for them to work with, Wooten said.

“Something like the African American Chamber of Commerce is so critically important,” said John Anderson, vice president of external affairs for JCP&L. “Organically, here we do have the people, the businesses are here, the talent is here. It just requires more networking to get the word out.”

Susan Hogan at PSEG agreed, adding that sometimes the issue is with nontraditional procurement, but the company recently worked with the Board of Public Utilities and the African American Chamber to help find, for example, businesses to provide financial services.

Jacquin Merricks, with Johnson & Johnson, said the biggest problem is cost of entry and finding a company that is ready to do business with a company as large as J&J.

“That’s why we often talk about Tier 2. Although, right now, you may not be ready to work directly with a company our size, getting in and working with our primes is a great way to get an opportunity to understand how we do business and figure out what can be done to do business on that level,“ she said.

J&J also mentors Tier 2 companies through the prime companies, and works a lot with businesses in New Jersey.

“That is the largest problem, is finding the right fit at the right time,” Merricks said.

For American Water, which runs into problems with diversifying because of the quality measures it is held to, as well as the cost of doing business due to expensive tools and machinery, finding diversity is tough.

“For a revenue intensive business, it costs a lot of money to have the equipment to do business with us, so, access to capital for small and minority businesses is still a huge issue,” Wooten said. “Not only in New Jersey, but across the country.”

Delta variant takes bite out of job growth, according to ADP’s...