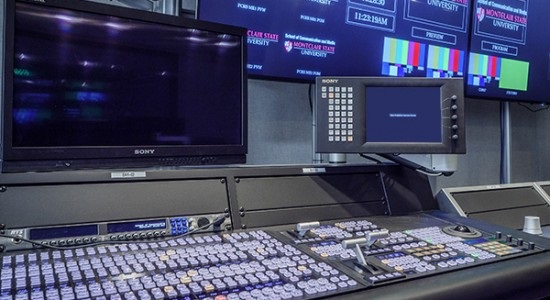 When Montclair State University cuts the ribbon on its new building for the School of Communications and Media on Tuesday morning, Keith Strudler feels the program will take a new place in university rankings.

Strudler, the director of the School of Communication and Media at Montclair State University, said the new $60 million facility, built in conjunction with technology from Sony, will be unmatched.

“They are going to be working in the most highly technologically advanced production broadcast space in any university in the country. And, in many cases, a space with better technology than any studio environment anywhere.”

According to the school, some of the highlights include:

Strudler, who came to the university this summer, said the new school and equipment will put Montclair’s program on the national map.

“Our students will walk into any work environment ready to roll,” he said. “I expect to see rapid growth over the next several years. Not just people on campus realizing the opportunities that are there, but I think more students in New Jersey will look at Montclair State first because of these opportunities.  And I think we’ll grow geographically as well.”

In addition to the state-of-the-art technology, Strudler said one of the differentiators of the program will be its emphasis on content creation.

“The real vision for students and faculty and outside partners is for this school and this space to be a place of content creation in all its forms: Film, video and new experimental forms of media such as virtual reality, and research projects,” he said.

“The reality is, content is content. I think that’s one of the overarching messages we want to have come out of the school. In today’s overarching media ecosphere, it doesn’t matter whether it’s television or mobile or YouTube, what matters is that it’s good content.”

Strudler said the school is looking toward the future in its programs, acknowledging that the production of in-house content is just as important and relevant as anything else.

“Our students will have the same ability to produce content for news programs as for companies,” he said. “We’re focused on the idea that content is no longer just a 22-minute news broadcast.

“I think we will have an increased focus on the (public relations) side of the house, which is really where you are seeing that kind of content come out. We’re about to launch a student-driven PR company, where we will bring on outside clients.”

The relationship with outside companies is key, Strudler said. And something the school is pursuing with great vigor.

Strudler said he couldn’t name any partners yet, but promises many are coming.

“Our students are going to benefit the outside partners that will be working in our space,” he said. “Whether it’s networks or agencies that want to come to Montclair to work with our students.

“This is going to give our students real portfolio and resume boosts that you won’t see in other places. Our learning environment is very much set up as a professional environment in addition to being a teaching environment — I think that’s pretty unique.

“The flexibility of space that we have here will give our students and our faculty the chance to creatively create content that’s just not feasible at most universities. We’ll only be limited by terms of our imagination because the flexibility and feasibility of the equipment and space we have really allows us to do anything.”

Perhaps the only thing the school doesn’t have yet is a name.

The school is searching for a partner for naming rights. In the meantime, it may just use one that school President Susan Cole came up with early this summer: “Hollywood East.”