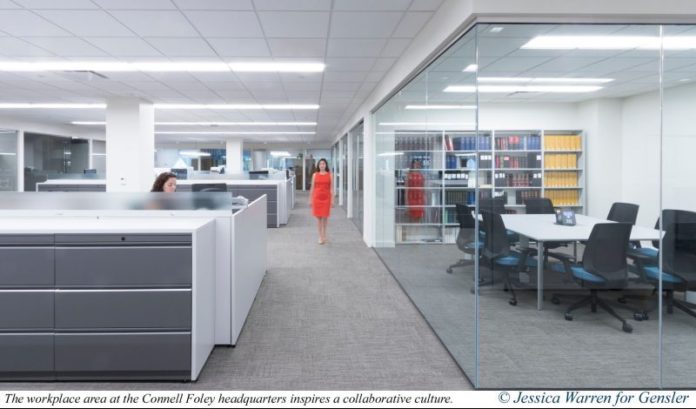 Connell Foley LLP, one of New Jersey’s largest law firms, has opened its new corporate headquarters in the 56 at Roseland building, according to a news release Tuesday.

“56 at Roseland’s dramatic façade, infrastructure, park-like setting and full-service amenities are top-notch, and we look forward to serving current and future clients from our new, state-of-the-art office space,” Philip F. McGovern Jr., Connell Foley’s managing partner, said in a prepared statement. “The experience working with the Mountain Development team was exceptional, and we are confident this is the start of a long and mutually beneficial relationship.”

The property, at 56 Livingston Ave., is also headquarters for law firm Lowenstein Sandler LLP and home to Brown & Brown Insurance.

“We are pleased to welcome another prestigious law firm to 56 at Roseland,” MDC President Michael Seeve said in a statement. “Connell Foley’s decision to move its headquarters here after 30 years at its previous location in Roseland is further testament to the remarkable results of this corporate environment.”

Connell Foley’s space at the property was designed by the Gensler architecture, design and planning firm. The firm said it was tasked with reflecting the future of the firm while simultaneously honoring its past.

“History remains important to the partners, who have extensive tenure with Connell Foley, as many started their careers at the firm,” Dana Nalbantian, Gensler’s principal and studio director, said in a statement.

Tom Reilly, Tom Stanton and Dan Loughlin of JLL represented the law firm in the transaction. Newmark Knight Frank is the exclusive leasing agent for the property, which has about 51,000 square feet of divisible space still available.

“Mountain Development’s vision to reposition 56 at Roseland into a modern legal center has rendered an outstanding result,” Stanton said in a statement. “Connell Foley’s offices here provide the firm with a new and improved corporate image and reflect its goals for the future. On-site ownership and management is another significant benefit.”

Connell Foley has additional New Jersey offices in Jersey City, Newark and Cherry Hill, as well as in New York and Philadelphia.

Licensing of police officers is 1 of 5 reform initiatives planned...