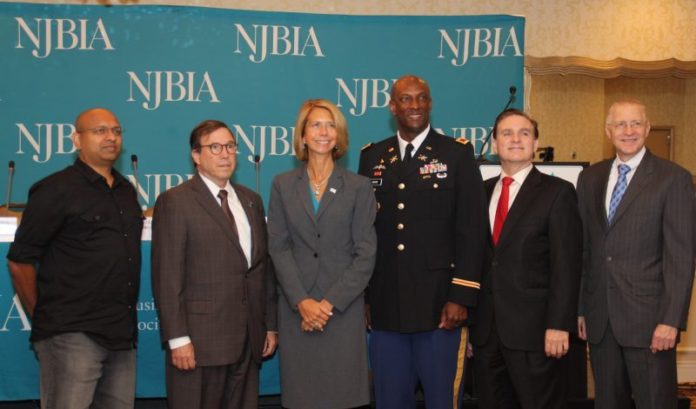 The U.S. military is coming to grips with the fact that it is no longer the world leader in that space.

“Assumptions of the past that the United States Army, and our armed forces, will always have dominance in areas such as land, space, maritime, cyberspace — those things are no longer true,” said Col. James Martin Jr., deputy joint base commander at Joint Base McGuire-Dix-Lakehurst.

“We have near-peer competitors who will be able to challenge us in places like cyber, in domains like space. So, we’ve got to change our concept knowing that … in some areas, we won’t be the dominant player.”

Martin was a panelist at an Innovation Summit on Wednesday hosted by the New Jersey Business & Industry Association in East Windsor.

The military has long been a hub of innovation, with many creations making their way to the consumer sphere.

“As you know, we’ve spent the last 15 years in conflict, in some low-intensity counter-insurgency conflict, and during that period, while we’ve been in those conflicts, there are other countries — nation-states — who have been modernizing. They’ve been advancing while we’ve been tied up with other parts of the world,” Martin said.

But the military continues to focus on multidomain battles, and incorporating the various variables that the forces will encounter. This includes night-vision technology, antenna technology — certain types of terrain where certain antennas won’t work — and jamming technologies to both jam enemy signals and avoid being jammed by them. There is also a focus on the improvised explosive device threats that have been a large part of the battles in Iraq and Afghanistan.

President Barack Obama’s administration focused on reining in military spending as well as pulling out of Iraq and Afghanistan, and the effects were felt in the innovation space.

“Over the past decade, there has been a lot of uncertainty budgeting, continuing resolutions, sequestrations, but I think we’ve got some really smart people who have prioritized,” Martin told ROI-NJ after the event.

“There was a period there, probably after 9/11 for 10 years, where we didn’t have to prioritize that much. If we needed it, we got it. But, after we started to draw down in Iraq and draw down in Afghanistan, the budgets really tightened up, and with the financial crisis of 2008, we’ve really been forced to probably do what we probably should have always done — prioritize and budget. Some of these things come with difficult decisions, because when you draw the red line between what’s in the priority list and what’s not, that first thing is probably something really important.”

Has that been the key to the strengthening of power of other nations?

“We have a saying in the military that the enemy gets a vote. And, so, regardless of what we are doing in our organization, that doesn’t prevent the other organizations and other countries from trying to advance their technologies,” he said. “With the environment of this networked world we live in, and with intellectual property moving across the globe so quickly, it’s probably only natural that other countries are going to rapidly advance.”

Martin compared it to the business world and how company sizes determine growth.

“It’s just like in industry,” he said. “Big, huge companies do not grow as fast as startups, and so startups have a lot of room to grow and to accelerate their growth. In our connected world, small companies, small countries and countries with small economies make advances faster than huge economies.”