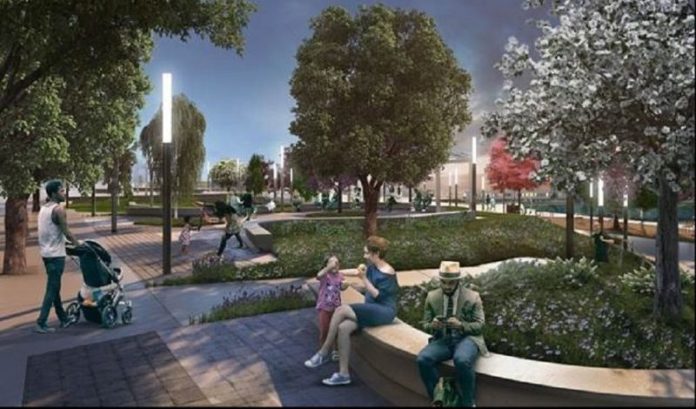 One by one the speakers came up Monday afternoon, eight in all.

And each, it seemed, only wanted to talk about 3 acres of the 22-acre project during the ceremonial groundbreaking for Mulberry Commons: the park itself.

The park, they said, is the key to the transformative project that will connect the Prudential Center to Newark Penn Station and the Ironbound. For all the housing and retail space that comes along with it, the park itself will be the game changer, they said.

“We all collectively recognize the important role that parks play in development,” Newark Community Economic Development Corp. CEO and President Aisha Glover said. “They create a sense of space, they act as a bit of a retreat, serving as an economic driver and really as a center of gravity within the city.”

Glover said that was the idea behind the name.

“Commons,” she said. “Ultimately, what we are trying to create is a shared space that brings people together.”

Jennifer Sage, principal of Sage and Coombe Architects, said the park will do just that.

Mulberry Commons will provide much-needed green and open space in downtown Newark, inviting and engaging all Newarkers from every ward.

“It has been well-documented that city parks bring people together,” she said. “They provide venues for physical activity and creative exploration. This design will do all of that as a setting for community events, concerts and a place to enjoy a quiet moment outside.

“The construction of this 3-acre park and its eventual connection to the Ironbound, the riverfront and Penn Station will advance the current renaissance of this city and confirm what everyone in Newark already knows: Newark is one of America’s vital urban centers and a city rich in beauty and diversity.”

(READ MORE from ROI-NJ on the Mulberry Commons groundbreaking.)

Hugh Weber, the president of the New Jersey Devils and the Prudential Center, said the park will be more than just an added value for patrons of the arena.

“The impression they are going to have of our city will change,” he said. “This will be a nice front door kind of experience that is much different than they have seen in the past.

“This is a world-class open space and a world-class park. We think it will quickly change the narrative of what it means to come to Newark to live, play and work.”

Making sure the park is clean and safe will be the charge of Anthony McMillan, CEO of the Newark Downtown District. He said he’s ready for the challenge because he knows the impact the park can have.

“Open spaces are meant to galvanize and bring people together,” he said. “I’ve had the pleasure of being part of the committee that has designed this park and come up with a plan to care for it.

“I can assure you, this is going to be amazing for the city of Newark. I look forward to the challenge of keeping the park clean and safe.”

Newark Mayor Ras Baraka is thrilled the park is one step closer to reality. It’s the latest of a number of Newark projects he has been able to get from the planning stage to the building stage.

“We have to drive this over the finish line, and the only way I know we’re over the finish line is when we are putting shovels into the ground. We’re out here getting ready to create a 3-acre park with a bridge with acres and acres of square feet around it, which is a game-changer for Newark.”

Barbara Kauffman, vice president and chief operating officer for the Newark Regional Business Partnership, saw firsthand the impact a park can have from her office on the 18th floor of 60 Park Place.

Kauffman saw how much the refurbishing of Military Park did for the downtown district when the park reopened in 2014.

“Military Park blossomed after the renovations were completed, with nearly every table filled in the summer,” she said. “As Prudential and other retailers opened on Broad and Halsey Street, and then the Prudential Tower opened, activity grew on the street, and lines formed for many of the new eating venues.

“There was development going on before. But once the park reopened, it was as if it were happening with a time-lapse camera.”

C&W arranges sale of science center in Branchburg for $6.4M