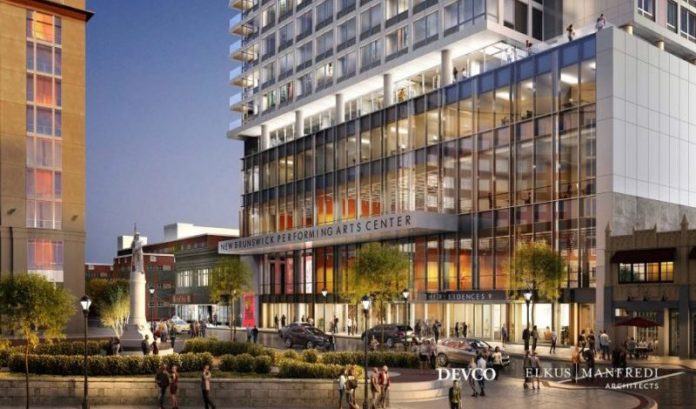 He had a lot to say, he told the audience at the groundbreaking of the New Brunswick Performing Arts Center last Wednesday afternoon. But this was a big day.

The arts, Cahill said, have played a key role in the revitalization of New Brunswick. And this 23-story center, a $172 million redevelopment initiative that will bring two state-of-the-art theaters, three rehearsal studios and more than 200 residential units to the city’s downtown cultural arts district, is a story worth telling.

“We’ve already seen in New Brunswick what investment in the arts can do for our community,” Cahill said. “I don’t think it’s simply a coincidence that New Brunswick and its arts organizations have run a parallel course in their growth and resurgence.

“This project will add to the more than 7,000 new jobs created in the past 10 years despite the worst national recession since the Great Depression. It will add 207 residential units, 20 percent of which are set aside for low and moderate income (residents), to the over 4,000 market-rate and affordable homes built or rehabilitated in the past two decades, increasing our population from 41,000 in 1990 to 60,000 in 2020, making New Brunswick the fastest-growing urban center in our state.”

But the impact of the center, Cahill said, will go beyond the numbers.

“It will allow our world class (arts) organizations, who already provided educational programming to thousands of children in our community in our county and across the state, to reach thousands more, developing in these children an appreciation of the arts, opening new doors to them in careers in visual and performing arts that may not have been accessible otherwise, and enabling our young people to experience the life-changing benefits of (the arts),” he said.

The NBPAC initiative is a 450,000-square-foot project, which will be located on the site of the former George Street Playhouse and Crossroads Theatre on Livingston Avenue. It is expected to open in 2019.

The center will be home to George Street Playhouse, Crossroads Theatre Company, American Repertory Ballet, and Mason Gross School of the Arts at Rutgers University-New Brunswick.

“This is an extraordinary example of public-private partnership and a resource that will offer so much for students, artists, theatergoers, local businesses, the city and the region,” Rutgers President Robert Barchi said. “Rutgers is excited to be part of NBPAC, and we can’t wait to have our students learn and perform here.”

They will do so on a world-class stage.

The Lyric Theatre, which will seat 462, will feature an 86-foot stage, a 75-foot fly tower and a trap system, with an orchestra pit that will be able to accommodate 60-70 musicians.

The playhouse, designed primarily for theatrical performances and smaller dancer performances, will have 252 seats and will feature a 60-foot stage and contemporary grid system for lighting and sound and will provide the NBPAC with additional flexibility for lecture, community and musical events to be accommodated.

In addition to the two theaters, the main building also will contain three rehearsal studios, which will replicate the stage spaces of the two theaters inside the complex, helping maximize the use of the theater venues by providing access to rehearsal time off the main and second stages. Each studio will be designed to support dance, drama, music rehearsals, general classes, workshops and small public performances.

In addition, there will be 30,000 feet of office space located on two floors above the theater complex that will be owned by Middlesex County and intended for use by arts organizations and potential private-sector groups.

Arts performances are just one part of the project, however.

The residential tower will have a wide range of amenities, including an outdoor roof deck, a demonstration kitchen, work space and a full fitness center.

“This project is a great example of what the public and private sectors can do when we work together toward a common goal of investing in our communities in ways that create jobs and promote economic activity,” state Senate President Steve Sweeney (D-West Deptford) said. “The partnership of the state of New Jersey, New Brunswick, Rutgers University and Devco has helped to transform the city and the region.

“Arts and entertainment can be important components of a multidimensional approach to economic development because they contribute to the economy with construction and permanent jobs and as attractions for commercial activity.”

The project was a long time coming.

Chris Paladino, the president of the New Brunswick Development Corp., told the audience it had been 3,502 days since the project was first announced at the Heldrich Hotel.

“Since then, we’ve experienced the country’s worst recession, a housing bust, failures on Wall Street and people stopped giving money to the arts,” he said. “But we didn’t quit on this project.

“Mayor Cahill wouldn’t quit, wouldn’t let us give up. The mayor continued to remind us how important the arts are to not just our community, but to community as a whole. How the arts strengthen our values, build community character and a sense of place. And maybe, most importantly, how the arts enhance the economic viability of a city.”

Paladino, who has led much of the revitalization of the city, tried to quantify just what the arts can mean for development.

“The trickle effect of having new arts infrastructure helps us build new condominiums and apartments, because people want to live in that environment,” he said. “So, it helps neighboring projects.

“Arts is a long-term investment, but it pays significant dividends. Once this project is up and running, we’ll probably bring another 100,000 people to New Brunswick that are coming to the 300,000 people who already were there.”

The economic benefit can be enormous.