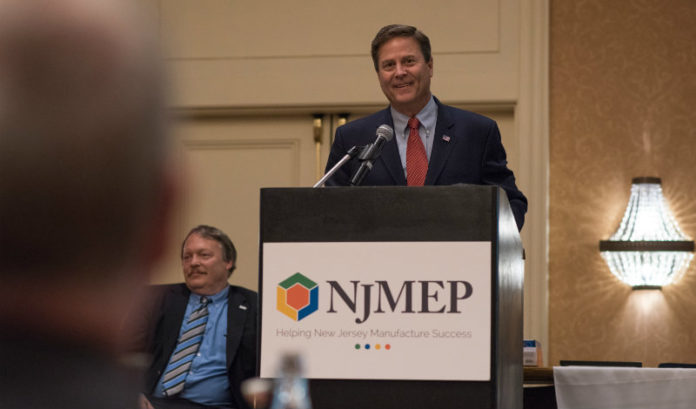 Donald Norcross regaled the audience with a story about one of his first days as a member of the U.S. House of Representatives.

“When I was sworn in to the 114th Congress, they got the entire freshman class and they did interviews on background and where you came from,” he explained.

“And then they threw in a question at the end: Do you watch ‘House of Cards’ or ‘The West Wing?’

“That’s the show I watch. I love to watch the manufacturing shows. The innovation. What we do best.”

Norcross could have been accused of playing to the crowd, as he was giving the keynote address at the New Jersey Manufacturing Extension Program’s sixth annual “Made in New Jersey” Manufacturing Day, held last Friday at the Bridgewater Marriott.

Norcross said he loves manufacturing. Loves the idea of working with your hands to solve a problem or create a process to produce results. Always has.

“Manufacturing is something you hear a lot about, but I live it every day,” he said.

Norcross talked about what it meant when he and his brothers got bikes growing up. They rode theirs, he said. He was tearing his apart 20 minutes later because he wanted to see how it worked.

“I grew up in the southern part of New Jersey, did a little bit of college and then I went to the other four-year school: I’m an electrician by trade,” he said. “I did an apprenticeship program.

“I’m very proud of my background. It’s not the normal way to get to Congress, from a construction site to the House.”

Now that he’s in the House, he’s using his experience to help change education and the workforce needs of the future.

More specifically, he’s sponsoring a bill that would allow parents to use money they saved in 529 plans for college for trade and vocational schools and training.

“When I grew up, every guidance counselor said, ‘Kid, go to college, that’s how you’ll make it.’

“The 529 plan: Saving for your kid to go to college. College wasn’t in my game plan. But the 529, unless you’re going to college, you’re not using it. We want to open it up so you can use it if your children want to be an apprentice.

“Let’s open up that old thinking to a new way of doing what we want to do.”

New Jersey, he said, needs more people who are able to work with their hands, saying nine of the 10 upcoming jobs do not require a four-year degree.

“We need lawyers, we need doctors, but you know what? You need electricians for when those lights go out, and you need a plumber,” he said. “You need apprenticeship programs. They are directly related to jobs. College is a way for some, but not all. Somebody has to build the college.

“I had three brothers who were much more focused on going to college, but I enjoyed working with my hands. That’s not what we’re hearing from our guidance counselors in high school. We’re trying to change that. Working with your hands is great.”

John Kennedy, the CEO of the NJMEP, couldn’t agree more.

Kennedy, who has a Ph.D. and has started and sold manufacturing companies during his working life, understands that the path to success doesn’t always start with college.

And Kennedy told the crowd it’s time to stop looking down on those who did not go to school.

“It is very important that we stop and change (the collective) attitude, because we are looking at people who are quite accomplished and capable, and we are looking at them almost as second-class citizens, because they didn’t go to college,” he said.

“I certainly believe in college, but I am also very proud that I can run a machine tool, and that I can go to work, and earn a living, and — believe me — it helped buy me my first house, and a lot of other things.”

State Sen. Steven Oroho (R-Sparta), who sits on the newly formed Manufacturing Caucus, agreed New Jersey needs to do more on the state level to adjust its workforce for the coming needs.

“There’s a lot of education-related resources,” he said. “It’s the largest component in the budget. Money is not the issue. The allocation of resources, that’s something that has to be debated.”

Norcross, who said he has bipartisan support, said a solution is easy to find.

“All you have to do is look to the trades for a model that works,” he said. “This isn’t rocket science here, it literally has been going on since the times of Christ, when you’re handing down to the next generation skills that you used.

“You go to school, maybe at night, but you’re in the shop during the day, learning how it all works. That’s the model that we need to promote.”

Oroho said he’s all for it in New Jersey.

“I think we have the facilities,” he said. “We’re not talking about all new things, but just how do we organize our educational system so, if you want a vocational career, there’s a seat here for you?”

That seat could one day be in Congress. Just ask Norcross.

“There are 211 attorneys in Congress, but there’s only one electrician,” he said.