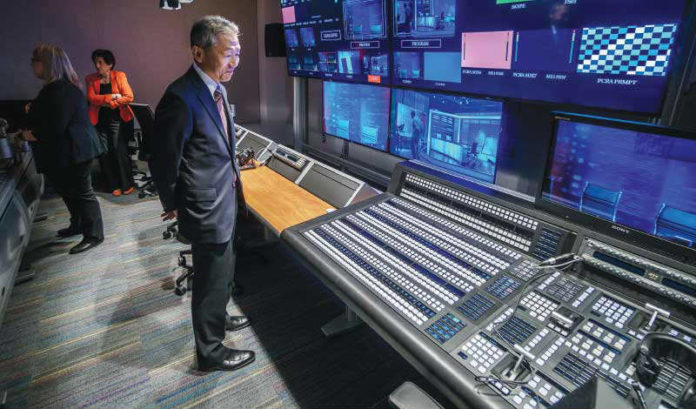 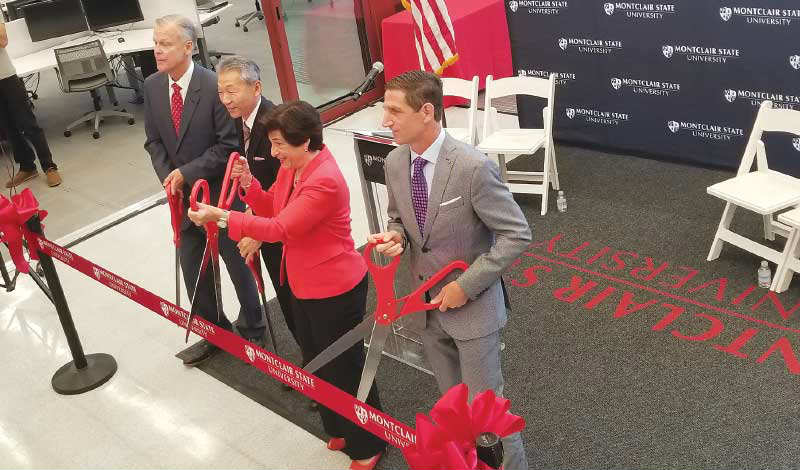 The communications school had its official ribbon-cutting in September. – Montclair State University

Schools in New York City would have loved to partner with Sony on a project to bring its latest state-of-the-art media technology into the classroom.

Sony officials, however, knew there was no reason to look over the river.

The deal to help Montclair State University open its $60 million school of communications this fall was based on a longstanding relationship the company has had with the school and the town, according to Theresa Alesso, vice president of sales and solutions for Sony Professional Solutions America.

“A key point (on this project was) locale and, most importantly, vision. We’ve been calling on Montclair and many other schools across the U.S. for many years, but, as we started doing a little bit more detailed work with Montclair, President (Susan) Cole’s vision for where she was taking the school and her aggressive nature of growing the university in New Jersey was very clear.

“It was perfect timing, because Sony was building up their higher education business unit at the exact same time that Dr. Cole asked us to come and help.”

The result is a partnership that Keith Strudler, the director of the School of Communication and Media at Montclair State, feels will move the school to the front of the college rankings.

Strudler said the facility will be unmatched.

“They are going to be working in the most highly technologically advanced production broadcast space in any university in the country. And, in many cases, a space with better technology than any studio environment anywhere.”

According to the school, some of the highlights include:

Strudler, who came to the university this summer, said the new school and equipment will put Montclair’s program on the national map.

“Our students will walk into any work environment ready to roll,” he said. “I expect to see rapid growth over the next several years. Not just people on campus realizing the opportunities that are there, but I think more students in New Jersey will look at Montclair State first because of these opportunities. And I think we’ll grow geographically as well.”

“Our goals and plans are mutually beneficial,” she said. “It made total sense for us to keep investing in New Jersey and to continue investing in a school that had the same plans for growth as Sony did.

“The alignment was a match made in heaven.”

John Garmendi, manager of strategic business development for Sony, said the partnership made sense on a lot of levels.

“The school is allowing us to bring forth products that are not yet ready for prime time,” he said. “The vision going forward is to support the school and university with respect to the School of Communication.

“We intend to partner with school, and, (in return), the school will make facilities available for training for our customers, product launches, announcements and so on.”

And not just in the school of communications, Garmendi said.

“Although the school of communications project is without a doubt the crowing jewel of our efforts together, it’s not the only thing we’re doing,” he said. “We’re also working with the school on a number of other projects, many of which are classroom based involving the school of nursing and computer science.

“What Sony is bringing to the table are not only traditional in-classroom technologies that you’d expect to see such as projectors and cameras, but also the opportunity for us to bring next generation teaching technologies. Things that will enable the school to more quickly move to an active learning environment.”

Sony Professional Solutions Americas President Katsunori Yamanouchi said at the recent ribbon-cutting that Sony was proud to play a key role in the future of the school.

“Sony is really proud to play a key role in these efforts. Our technology product and knowledge of media industry helps create … active learning solutions,” he said. “This building has often been described as being beyond state-of-the-art. This learning space demonstrates our shared commitment to educational excellence and technology innovation. I believe it is just beginning.”