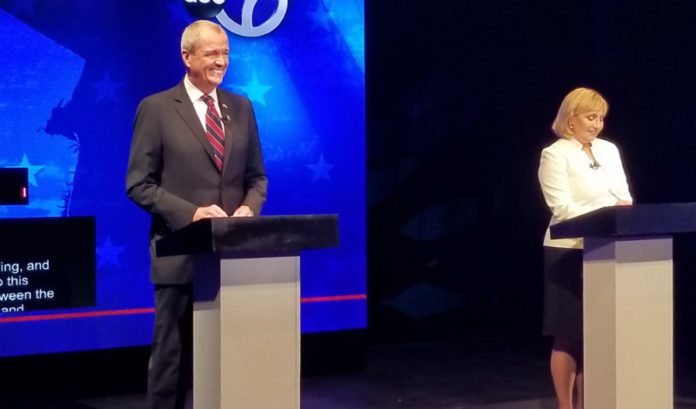 The next governor of New Jersey will have to deal with the question of continuing the state’s impressive tax incentives, such as the ones that have helped lure companies and development to Jersey City and Camden — and the $5 billion over 10 years aimed at persuading Amazon to locate its second headquarters in the state.

The awards mainly have been given to large companies in an attempt to keep them in the state, in return for providing job creation and significant economic impact.

The topic did not come up during the one-hour gubernatorial debate between Republican candidate Lt. Gov. Kim Guadagno and Demorcratic candidate Phil Murphy on Tuesday night at the New Jersey Performing Arts Center in Newark, but both candidates addressed the issue during the brief question-and-answer period with the media that followed.

A major part of Guadagno’s time in office has focused on economic development — in addition to seemingly attending every ribbon-cutting and groundbreaking in the state during her seven-plus years in office.

Guadagno, speaking first, said continuing the Red Tape Commission and tax incentives would be a part of her administration.

“We’d obviously keep what we’re doing, because it’s working,” she said. “We’ve cut unemployment in half and it didn’t cost the taxpayers any money. We’ve created an award-winning model through what we’ve called the Partnership for Action.

“We would keep the Red Tape Commission and I would do it because, frankly, I enjoy it. My lieutenant governor, Carlos (Rendo), is going to be responsible for doing the audit.”

Guadagno, who has said she would introduce a comprehensive audit of the state government if elected, challenged Trenton during the answer.

“What he’s going to be is disruptive, quite frankly,” she said. “He’s going to go through each of the 25 departments and he’s going to make sure that the people of New Jersey are getting their money’s worth.”

“They’ve given big corporations tax incentives, which they haven’t enforced, for over $8 billion,” he said. “We’re going to undo that. We’re going to go back to investing in the middle class.”

But Murphy said he wouldn’t entirely do away with incentives.

“I disagree with the way (the Christie administration) has done it,” he said. “I’m not saying that you don’t need some incentives in certain situations, but tax incentives have been a blunt instrument, one size fits all, only big companies — that’s all we’ve sold.

“We haven’t sold that we have great public schools and infrastructure and location and diversity and density and all the other things, and highly educated work forces. So, I’d broaden the palette of what we sell, I’d be much more precise, and — to use the line of hockey great Wayne Gretzky — ‘You don’t go where the puck is, but where it’s going.’ I’d put our incentives to where our economy is going.”

As an example, Murphy brought up the stark difference between incubators in New Jersey and New York.

Guadagno said the incentives are the biggest positive for the state’s business industry.

“What Phil Murphy would know if he did his homework is that the only thing that makes New Jersey competitive (is) tax credits,” she said. “I may not like them, it wasn’t something that we created when we came in in 2009 … but, what we do need to do is go back and re-evaluate those tax credits, because I think they have accomplished their goal and I think we can use them elsewhere in a better way.”