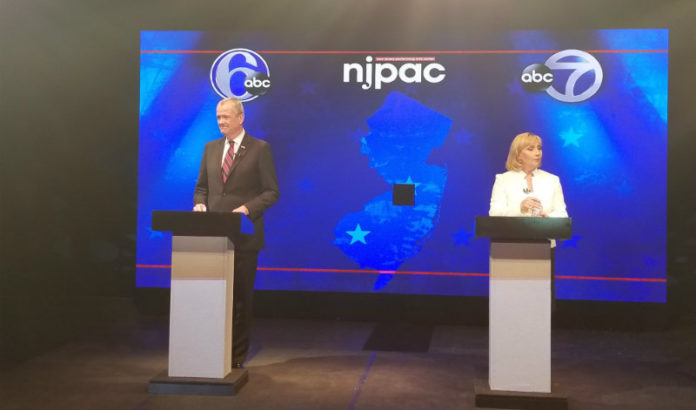 The best lines from the gubernatorial debate between Democrat Phil Murphy and Republican Lt. Gov. Kim Guadagno on Tuesday night at the New Jersey Performing Arts Center in Newark:

Guadagno (on Murphy’s plan to fund education): I suggest to the listeners out there tonight and to the people in this room, to look to their right and their left, because that $9 billion is coming from you if Phil Murphy is elected governor. The people of New Jersey are taxed enough.

Murphy (on funding pensions): We are a state that folks no longer trust. … We can’t keep leaving these folks at the altar and then keep coming back to them and say, ‘I’ll meet my end of the obligation if you make more concessions.’ That’s not in the category of ‘a deal is a deal.’

Moderator Jim Gardner (to Murphy, after asking him twice to explain how he’ll fund pensions): Forgive me, but I still haven’t heard how.

Guadagno (on Murphy’s funding ideas): Quite frankly, Phil, that sounds like the (Gov.) Chris Christie plan.

Murphy (on Guadagno’s gun comments to not politicize the Las Vegas massacre): When those 58 innocent people were killed, I heard from the lieutenant governor that now is not the time, and I would just say, it was not the time for them to lose their lives, either.

Murphy (on Guadagno’s stance on gun laws): You just heard from someone who has got a rating of ‘A’ from the NRA; I’m proud, for the first time in my life, to be given an ‘F’ by the NRA.

Guadagno (on Murphy’s stance on guns): I don’t believe the answer is to take guns out of the hands of honest, law-abiding citizens. I believe that Phil Murphy has to answer the following questions: If guns are so bad, why has Goldman Sachs invested in gun manufacturers over the years, and how much has he profited by that investment?

Murphy (on DACA): This is a moral test, black and white. … We will stand up to this president. If need be, we will be a sanctuary not just city, but state.

Murphy (on the startup economy): We were Silicon Valley before there was a Silicon Valley and, under this administration, we’ve lost our edge. We have 15 incubators in New Jersey. New York has 179. That doesn’t happen by accident. Those are policy choices. They’ve ignored it; we’ll embrace it.

Murphy (on the accusation he raised money with Harvey Weinstein): I didn’t ask for, and I didn’t get, one dime from this guy.

Guadagno (on Murphy pairing her with Christie): The inconvenient truth for Phil Murphy is that Chris Christie is not on the ballot in November, I am.

Murphy (on the accusation that he favors single-payer system): If I had your track record to run on, and Gov. Christie’s, I’d make up stuff, too.

Fulop understands today’s Hudson County chair vote is as much about...