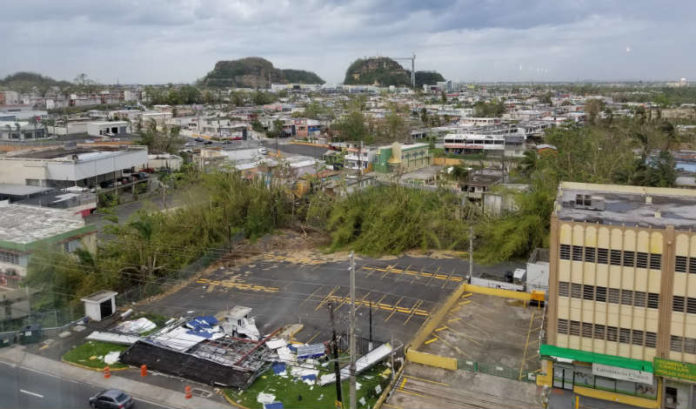 When the sun sets in Puerto Rico, it brings with it an unencumbered view of the Milky Way.

But it’s a view a growing number aren’t sticking around to see.

The hit to the island’s infrastructure from the back-to-back beating it took from hurricanes Irma and Maria last month continue to take its toll, and power remains scarce.

As federal aid and independent relief efforts come trickling onto the island, an increasing number of residents who can afford to, or find a way to, continue to leave — reports already have shown a significant number fleeing to Florida.

The true impact of these departures, however, may be felt for years, as those with access to leave are often the members of the professional class.

The problems were described in detail to 20 health care professionals from New Jersey on Wednesday, when they met with Puerto Rican and U.S. officials at the Government Command Center in San Juan in an attempt to learn how they can help.

The trip aboard two charter planes to the hurricane-ravaged island was sponsored by CareOne, the largest senior and post-acute care provider in New Jersey, in partnership with RWJBarnabas Health, the largest health care system in the state.

Dr. Ernani Sadural, global health director of RWJBarnabas Health, said the people leaving Puerto Rico are the people the island desperately needs to use to rebuild.

“Compounding that problem is the exodus of many Puerto Rican professionals off the island, many of whom are business owners, effectively shutting down businesses and creating even more unemployed citizens on the island,” he said, recapping the conversations the team had with officials at the command center.

The loss of health care professionals is just as damaging.

Currently, 500,000 people on the island do not qualify for Medicaid, so there are large vulnerable populations, Sadural said.

Since a majority of the 69 hospitals on the island are privately owned, it means those who are leaving are the ones who can afford to pay for health care, he said.

And those who aren’t leaving on their own are being actively recruited.

Just that day, one doctor on the island received a call from a headhunter in Orlando, Florida, Sadural said.

In the three weeks since Maria hit, the slow pace of federal aid and lack of power have motivated many to leave.

Roberto Prats, former senator in Puerto Rico and legal adviser to CareOne’s sister company, InnovaCare Health, told reporters on the trip Wednesday that the energy grid is currently running at 6 percent of its capacity despite efforts to repair it.

Restoration efforts managed to increase that figure to 15 percent, but it had just collapsed back to 6 percent Tuesday, Prats said.

Prats recounted the bankruptcy proceedings in federal court to restructure more than $70 billion in debt, adding that it now becomes more critical because of the necessary investment to the infrastructure — with a focus on wind and solar energy.

“The grid is the biggest challenge.”

Generators have become a hot commodity, with those who have one selling them for as much as $7,000, Prats said.

Local officials say the island is getting the attention needed to help solve the issues, despite the infighting between the Department of Health and Human Services and the Federal Emergency Management Agency.

And Prats said the carousel of Congressional delegations coming on and off the island — as well as the visits from the president and vice president — has kept the media focused on Puerto Rico.

“Whatever issues people have Donald Trump, he’s the president. And the presidency in Puerto Rico is not to be taken lightly,” Prats said. “It’s a controversial visit … but we’re not about the politics, we are about restoring order and restoring the island to what it used to be — and stronger.”

On Friday, House Speaker Paul Ryan is expected to visit, along with U.S. Rep. Rodney Frelinghuysen of New Jersey.

These visits also help Puerto Ricans outside Puerto Rico keep tabs on what’s going on, since many systems are still down and little information is coming from inside the island, Prats said.

The information coming out often comes from the people coming out.

Puerto Rico has lost, some estimate, at least 50,000 people to the U.S. mainland since the hurricanes struck — and more are likely to follow, officials told the CareOne and RWJBH team.

CareOne and RWJBH brought water and other supplies for the hospital staff and command center.

A third plane from CareOne full of supplies, including generators, landed in Puerto Rico on Wednesday and the supplies will be distributed by CareOne’s team on the ground.

Both organizations will use information gathered on the fact-finding trip to formulate future plans of assistance.