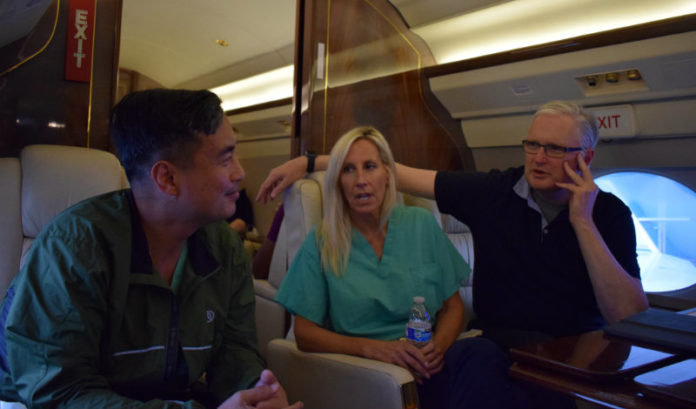 As they toured the grounds at Hermanos Melendez, a private hospital located about a 20-minute drive from the capital, a team of 20 health care professionals from New Jersey heard stories of the challenges the hospital is facing while providing medical care on the bankrupt island in the aftermath of two devastating hurricanes.

One doctor told the team about having to reduce dialysis times from five hours to just two, just to conserve on the diesel used to power the machines.

Other officials talked about how a lack of power is creating a problem for the use of ventilators and refilling oxygen tanks.

That’s how it went for four hours last Wednesday.

After arriving on two chartered planes sponsored by CareOne, the New Jersey team of officials from CareOne and RWJBarnabas Health took inventory of what was available on the island and what was needed by the hospitals, as well as what the various emergency response teams needed at the command center in San Juan.

The organizations want to help. And they knew they needed to get on site to figure out the best course of action.

“Our goal is for this to be a long-term mission,” Tim Hodges, the chief strategy officer for CareOne, said. “This is the first day with feet on the ground doing the assessment.”

Dr. Ernani Sadural, the director of global health for RWJBH, said his team is glad to be part of the process.

“We decided to collaborate to see if we could have an intentional long-term strategy to help,” he said. “We’re trying to create a process for not only helping the immediate needs of the communities we are asked to help, but, more importantly, to help in the transition of the long-term recovery.”

Sandural said hospitals on the island are at a crisis point.

“Hospitals are still running on generators, which is such a fragile system and creates these almost daily emergencies,” he said. “If they shut down the hospitals, they (would) have to evacuate the patients to another facility, which is another Herculean task. “

New Jersey is home to the United States’ third-largest population of Puerto Ricans, most of whom are concentrated in Newark, Camden and Paterson.

What is happening on the island affects the families of Garden State residents.

It also impacts New Jersey businesses. That’s especially true for Fort Lee-based CareOne, which has facilities on the island with 2,000 employees, along with sister company InnovaCare Health.

CareOne’s teams on the ground are managing multiple relief efforts across the island, and have an organization helping with logistics so the supplies aren’t only channeled into San Juan.

Hodges saw firsthand what was needed at Hermanos Melendez, which is located in Bayamon, 20 minutes from Isla Grande in San Juan, where the Office of Emergency Management is set up.

The hospital, which has 200 doctors and 700 employees, lost power after Hurricane Maria, a Category 4 hurricane with 150 mph winds, made direct landfall Sept. 20. It was the second hurricane to impact the island in two weeks, following Hurricane Irma on Sept. 7.

Roberto Prats, a former member of the Puerto Rican Senate and a legal adviser to CareOne’s sister company, InnovaCare Health, said power was restored Oct. 8, but many problems still exist.

The top floor of the eight-story hospital was damaged by the hurricanes, and the roof continues to leak in at least four rooms of the dozen on the floor.

And the hospital still can’t get the medical supplies it needs, doctors told the New Jersey team. Which is why CareOne hopes to get more involved.

“We found five to six things we didn’t know about what this hospital needs,” Hodges said. “Seeing is believing, and the front line is the only way to go.”

The view is of anything but an island paradise.

From the windows on the top floor, the damage to the neighborhoods of the city are set against the backdrop of lush green mountains.

Trees are uprooted or snapped in half, lamp posts and electric poles are lying on the sides of the roads, building signs are missing letters and the roofs of many buildings are ripped off.

Despite this, officials at Hermanos Melendez feel their building is one of the lucky ones. It has power.

Needs are easy to find on the island.

Sadural said it appears the biggest need is to get more vehicles to get aid to the island’s residents.

One idea, he said, would be to bring mobile ICUs or clinics to the island.

But how to transport them or set them up is another matter altogether.

And, after getting the vehicles onto the island, they, like the cars the New Jersey State Police are currently shipping over, are going to add to the gas burden.

There are hours-long lines for gas, even though shipments are now coming in regularly.

And at some gas stations, priority lines have been set up for medical and emergency professionals — but not their support staff.

Hodges said trying to figure out a game plan was the reason for his group’s third visit to the island since the hurricanes.

“We didn’t want to just throw bodies on the ground … we wanted to have concerted plan, to do due diligence,” Hodges said.

Hodges also wanted to make a personal connection with the employees on the island, a gesture he learned to appreciate after colleagues from Massachusetts came to help in New Jersey following its great natural disaster.

“We learned from Hurricane Sandy,” he said.

Rafael Rodríguez Mercado, the secretary of health for Puerto Rico, said there has been an inability to coordinate care efficiently among the island’s 69, mostly private, hospitals.

He spoke to the New Jersey team at the Government Command Center where the U.S. Department of Health and Human Services, Federal Emergency Management Agency, the military and law enforcement are stationed in San Juan.

The command center is at the Convention Center of Puerto Rico (Centro de Convenciones de Puerto Rico Dr. Pedro Rosselló González) on Isla Grande, which faces the beachfront hotels in the tourist neighborhood of Condado, on the outskirts of Old San Juan.

It’s been 21 days and counting without power and water in some areas, and a growing public health care danger.

Mercado and others have been quoted in Puerto Rican media as saying there is no public health care crisis.

But Sadural, Hodges and Margie Heller, administrative director of community health and outreach at RWJBH, know that time is running out for that statement to remain true.

(READ MORE from ROI-NJ on the efforts to help Puerto Rico.)

And the island’s most vulnerable populations are soon going to be unfunded for health care.

Congress appropriated, as part of the Affordable Care Act, billions in capped funding through 2019. An additional $300 million was granted this year.

But, even with that infusion, officials said Wednesday, funds will not last until the end of the year to cover the island’s more than 1.6 million Medicaid recipients.

After that, they are on their own.

This is compounded by the post-hurricane migration to the mainland, which has taken away mostly professionals — that is, those who can afford to pay.

This is a problem, since 63 of the 69 hospitals on the island are private hospitals, Sadural said.

Support from New Jersey has been pouring in in the form of donations and boots on the ground.

In addition to the two planes CareOne sponsored to bring down the health care professionals, a third was charted in Miami, bringing generators to be delivered throughout the island.

Newark and Jersey City have sent law enforcement and emergency personnel, the New Jersey State Police and Port Authority Police were spotted at the command center, and Gov. Chris Christie signed an executive order to station more than 1,000 emergency response and military personnel in Puerto Rico.

CareOne is also focused on fundraising, which was part of the reason it flew media to the island last week.

An event planned for this Thursday aims to raise about $5 million, with ticket prices starting at $1,000 each. Hodges said $800,000 has already been raised.

“We wanted to show the power of the collaboration of two health care companies,” Hodges said. “CareOne underwrote the cost of transportation and has employees on the ground to guide us.

“(CEO) Daniel Straus really operates his business like a charity.”

At end of day, the question remains: how to help and what to provide for Puerto Rico, despite the infrastructure obstacle, and in a meaningful way.

“We will be the enchanted island of the Caribbean.”

Good to Great is an occasional feature in ROI-NJ, where we highlight New Jersey companies and individuals going above and beyond to help. The concept is based on this idea: Do good work, so you can do great things in the world.

Have a story we should tell? Contact editor Tom Bergeron at tbergeron@roi.wxp.io.

Shade, working out of CDI, gets $750K grant for wearable that...