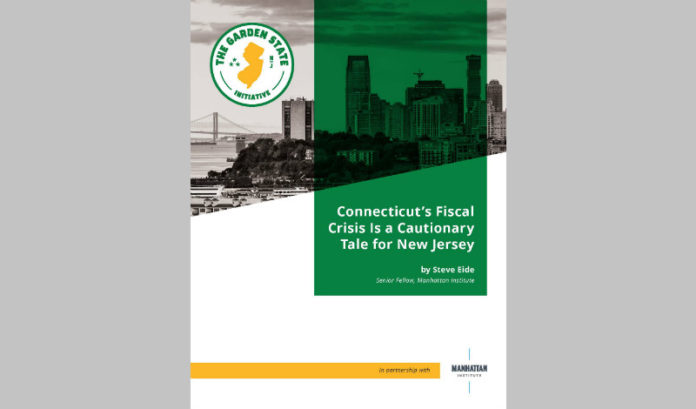 (READ MORE from ROI-NJ on the GSI report.)

Here’s a more detailed look at the report.

GSI asked and answered five questions in its conclusion. (Some answers have been edited down.)

What effect will the resolution of New Jersey’s fiscal crisis have on property taxes?

Though concern about excessive property taxes remains high in New Jersey, much of the public fails to grasp the connection between that issue and the crisis in the state’s finances. One of the most controversial debates during Connecticut’s recent budget season centered on a proposal by Gov. Dannel Malloy’s administration to shift $407 million in annual teacher pension costs (one-third of the bill) onto localities. The proposal was vigorously opposed by affluent towns, but also the state teachers union, over fear that rising pension costs would reduce funds for salaries and jobs.

Though much of the administration’s rhetoric targeted the unfairness of state funds being used to subsidize teacher benefits in wealthy school districts, others raised concerns about how Hartford and other distressed urban areas could be expected to shoulder their teachers’ retirement benefit costs. The entire episode recalled a failed attempt by officials in New Jersey in the early 1990s to shift some of the state’s pension costs onto localities.

If state officials revisit this proposal, they are likely to face the same political opposition that assembled two decades ago in New Jersey and this year in Connecticut. At the same time, it is implausible to think that New Jersey localities will be wholly unaffected by any serious plan to resolve the state’s fiscal challenges. The sums are too large, and state and local finances are too intertwined. It is incumbent on state officials to be forthright about this reality. Many irresponsible decisions have been made by officials at the state level. But reining in local property taxes will have to require increased accountability for local officials.

New Jersey’s and Connecticut’s pension mismanagement stretches back many decades and should raise serious doubts about whether either state can ever be trusted to responsibly manage a defined benefit retirement system.

Any honest assessment of a retirement benefit system’s affordability must take into account that system’s inherent risks and the management capacity of its employer sponsor. Decades of underfunding the SERS left Connecticut facing unsustainable cost trends. The “solution” to that problem enacted earlier this year entailed, essentially, underfunding the system yet again: putting less in up front and pushing more costs onto the next generation of taxpayers.

If New Jersey officials do not want to reduce pension or health benefits to ensure funding for existing promises, they will almost certainly have to implement a refinancing strategy in order to keep the payment schedule on a reasonable footing. They will, as Connecticut officials just did, create a more expensive system and compound intergenerational unfairness. The structure of defined benefit systems will always lend itself to manipulation when politicians find it convenient.

In light of its deep pension underfunding challenges, what can New Jersey afford in terms of health benefits?

Though ordinarily eclipsed by the debate over pension reform, health benefits for active and retired workers also continue to grow at a rate above revenues. In Connecticut, the cost of retiree health care exceeds the cost of active employees’ health care.

As both the New Jersey Pension and Health Benefit Study Commission and Fund for New Jersey have pointed out, simply bringing health-care programs into alignment with private-sector norms — policy that’s arguably important to enact for reasons of taxpayer equity alone — would raise billions in savings that could then be rededicated to shoring up the pension systems.

How should fiscal volatility be managed?

New Jersey’s system of government finance seems likely to become more volatile in the near term. Levels of political support for instituting a millionaire’s tax are strong. High earners derive proportionately larger shares of their income from investments.

In 2014, the most recent for which data are available, the top 1 percent of New Jersey income tax filers derived 12.6 percent of their income from interest and dividends and capital gains, as opposed to 6.4 percent for all filers. Though taxed at the same rate as ordinary income in both states, income from investments fluctuates more than ordinary wages and salaries do. Thus, shifting more of the tax burden to high earners will lead to greater revenue volatility for New Jersey’s budget.

In a 2014 analysis that characterized revenues derived from a proposed millionaire’s tax as “highly volatile and subject to significant annual change,” the Office of Legislative Services notes that income tax revenue from filers with income in excess of $1 million increased 25 percent in 2007 and then fell by 25 percent the subsequent year.

What effect will resolving New Jersey’s fiscal crisis have on the middle class?

If New Jersey officials do not plan to secure funding for pensions through comprehensive benefits reform, they will have to raise taxes on the middle class to pay for pensions. This should be explained forthrightly. Property and sales taxes collectively take in far more than the income tax in New Jersey and Connecticut.

The millionaire’s tax touted by many New Jersey Democrats is projected to bring in about $600 million, according to the New Jersey Office of Legislative Services, a sum far short of the billions that the state needs to adequately fund its pensions. Throughout Connecticut’s recent series of tax hikes — which have raised billions in annual revenues — officials found that they could not simply rely on taxing the 1 percent alone. They had to raise the sales tax rate, reduce or eliminate many exemptions, and raise income taxes on all single filers making more than $50,000 and joint filers making more than $100,000.

Any government revenue system seeks to minimize distortions in the economy, which ordinarily means, first, a certain balance among its various revenue sources; and second, an avoidance of drastic changes.