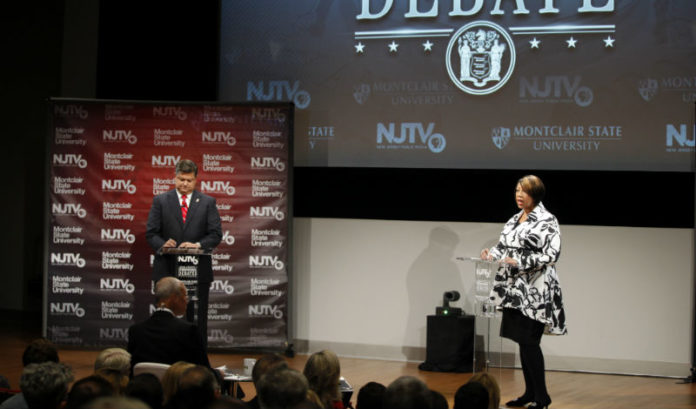 On the day Gov. Chris Christie announced Newark would have the state’s support in bidding for Amazon’s HQ2 headquarters, Assemblywoman Sheila Oliver hung back in her support of the move to bring the online retail giant into her district.

When asked during the lieutenant governor candidates’ debate Monday night at Montclair State University about the various tax credits given to major companies in the state — many of which have not directly benefited New Jerseyans — Oliver (D-East Orange), whose 34th District contains the pick for HQ2, was reserved.

“Christie and (Republican gubernatorial candidate Lt. Gov. Kim) Guadagno gave exorbitant tax credits to very wealthy corporations in the state, and it was upon the premise that it would create jobs,” she said. “It has not created significant numbers of jobs. There are people who live in those communities where those tax credits were given, and you can document there was no new job creation.”

Of those given as examples where tax credits were awarded, several were in her legislative district.

That includes $250 million so Prudential Financial could move a few blocks up Broad Street in Newark, in Oliver’s district, $40 million for Honeywell to move from Morris Township to Morris Plains and $82 million for Goya Foods to move two miles.

Now, Amazon is being offered as much as $7 billion in tax credits to bring its second headquarters to Newark.

And, while some feel the massive incentive gives New Jersey a huge advantage, Oliver said the offer needs a full evaluation.

“I’m glad that Newark is in the mix, but I think that (Democratic gubernatorial candidate) Phil Murphy and I would sit down with stakeholders and make a determination if that’s worth our time,” she said. “I think it’s time to examine all elements of the deal and see what works in the best interest of the residents of the state.”

So Phil Murphy and Sheila Oliver aren’t behind a deal to bring Amazon to New Jersey, which would create 50k jobs?

When asked again post-debate, Oliver said she was cautious.

“I think, as I put on the record, I am very excited about the prospect of Amazon coming to New Jersey, but I do not believe it should be a blank check that is written,” she said. “I think Ambassador Murphy and I look forward to sitting down with the representatives of Amazon and the city of Newark, and making sure that whatever is done leads to job creation in this state. A tax credit without commitment upon creation of jobs is no benefit to our residents in New Jersey.

“But I think it’s very exciting, the announcement that was made today.”

“Anytime you can keep a business in the state, that is money well spent,” he said. “And that’s what Kim Guadagno has dedicated her public life to. It’s keeping businesses in the state of New Jersey.

“The Murphy-Oliver ticket, on the other hand, is going to drive businesses out of the state of New Jersey. When you increase taxes, businesses do not want to invest.”

(READ MORE from ROI-NJ on the quest for Amazon and the best lines from the debate.)

The mayor of Woodcliff Lake cited Mercedes-Benz leaving Montvale, and Hertz leaving Park Ridge, before bringing up a company in his own town.

“We just finished a tax appeal at BMW … and they are staying,” he said. “If you don’t attract businesses to the state of New Jersey, none of these people here in the audience will be employed.”

Oliver said that, any time a credit is given, that is money being removed from the state treasury, and, unless the initiatives are generating revenue to go back into the treasury, it is not a successful initiative.

But, the state is an attractive one because of its transportation corridor and highly educated workforce, she said.