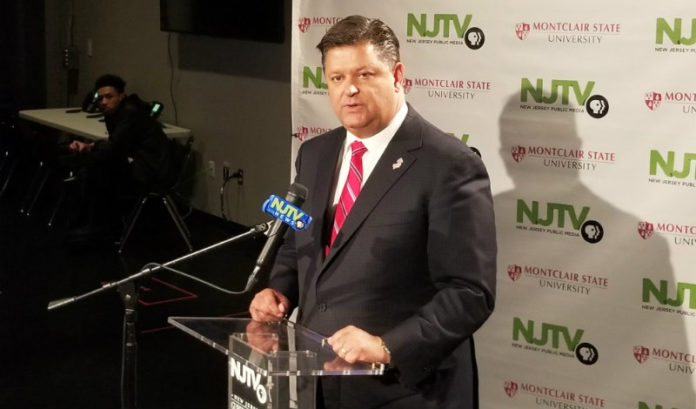 The best lines from the only debate between the lieutenant governor candidates in the 2017 gubernatorial race, held Monday night at Montclair State University.

Some of the highlights:

Rendo (on the Democratic ticket’s stance on sanctuary cities): “(It) is the most anti-cop, anti-law enforcement ticket in the history of the state of New Jersey.”

Oliver (when asked what a sanctuary city is): “It means that, unlike Lt. Gov. Guadagno, who deputized her sheriff’s officers when she was Monmouth County sheriff, going into people’s homes in the middle of the night, tearing families apart — Phil Murphy and I will not do that.”

Rendo (holding up a blank paper after sharing Guadagno’s plan to reduce property taxes): “Their plan is this. Blank. Zero. They have absolutely no plan to bring property tax relief to the state of New Jersey. … They’re going to do it from your pockets.”

Oliver (on tax credits to corporations): “I would close corporate tax loopholes, which there are significant numbers of corporations in the state that are taking advantage of it. They are making profits in New Jersey, shifting profits out of the state and, as a result, they are not paying their fair share.”

Rendo (on Oliver’s response to Amazon tax credits): “Think about the hypocrisy of that statement. You just said two seconds ago you want to increase tax on corporations, and now she’s saying let’s bring corporations to Newark.”

(READ MORE from ROI-NJ on the debate.)

Oliver (on Rendo’s accusation of Murphy not providing tax returns): “Phil Murphy did make his tax returns available to the public in New Jersey … unlike, I might say, the president you supported who still hasn’t given the United States citizens a copy of his tax returns.”

Oliver (on Rendo’s charge that it is hypocritical to profit off gun sales): “Lt. Gov. Guadagno is hypocritical to say she has supported gun manufacturing when she has taken $50,000 from the National Rifle Association to create the heinous ads in New Jersey that are running.”

Rendo (on legalizing pot, early criminal release and sanctuary status): “What are we going to have here in the state of New Jersey? A bunch of criminals out on the street, high on pot, and protecting a sanctuary state? My question is, what was Phil Murphy smoking when he thought about that?”