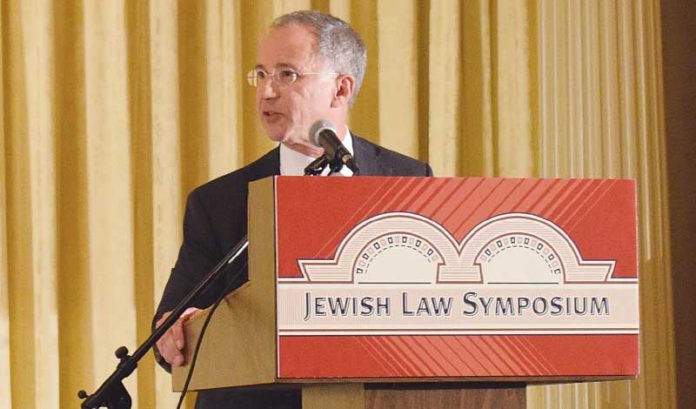 He no longer needs to.

Six months after being fired as the U.S. Attorney for New Jersey, Fishman was free to regale the crowd of 900 attorneys at the annual Jewish Law Symposium at Birchwood Manor with his own opinions, during an evocative and reflective 30-minute speech.

Fishman focused on the pursuit of justice in the federal criminal arena — and the importance of taking accountability and showing remorse, specifically noting the Bridgegate case.

He spoke about how his team determined the components of leniency and plea bargains for the defendants in the lane closure scandal.

“It is also why defendants like Bridget Kelly and Bill Baroni, we said, who perjure themselves on the stand, get sentenced more harshly,” he said. “Partly, of course, it’s what we perceive to be disrespect and undermining of the system. But it’s also because, by testifying the way they did, they totally rejected their own complicity and demonstrated the complete opposite of remorse.

“Denial and subterfuge do not lead to forgiveness.”

Taking responsibility and showing remorse came up again, when Fishman pivoted to the executive power of pardoning criminals and President Donald Trump’s recent use of it.

“There has been a long history of pardons in the last 200 years,” he said. “There have been a slew of bad pardons.

“The pardon of (former Maricopa County, Arizona, Sheriff) Joe Arpaio stands right at the top of the list for me. Because, while the president does have the complete pardon power, and, in effect, the ultimate exercise of prosecutorial discretion, my view is that power should only be invoked when there is real remorse. And, at least, if not real remorse, a real acceptance that you might have done something that might in fact be wrong.

“Joe Arpaio is defiant, and he is defiant about something we hold dear. He is defiant that we should have the right to have cops treat you in a way that is constitutional. And, so, 17 months of defying a federal court order, to me, does not justify a pardon. Maybe, after the process played out, if he had been sentenced, and he was in fact an 85-year-old man who had done service to the public in other ways, perhaps clemency might have been the answer and no jail time. But not that.”

It’s hard to imagine, but when Fishman accepted the offer to keynote the symposium earlier this year, he said he wasn’t sure what the current hot topic would be.

Turns out, there were plenty. The crowd applauded as he rolled off a few.

“There are a few topics that could warrant some discussion like yesterday’s retooling of the travel ban, Bob Mueller’s investigation, no-knock search warrants, threats to indict, conflicts of interest and obstruction of justice, the use of private emails to conduct government business — it’s back again — the president’s assault on the court system, his relentless attacks on the press, his failure to comprehend that Colin Kaepernick and every other athlete in every other sport has the right to kneel and protest, stand up, sit down, join arms, go out in their pajamas, or express him or herself in any way that might or might not turn out to be disrespectful,” he said.

After all, it was Trump that allowed Fishman to speak so freely. Trump’s the reason Fishman no longer is employed.

“On March 10, the President of the United States — the current president, not the one who appointed me — requested my resignation as United States Attorney. As my British friends would describe it, I was thanked off.”

“So, as the clock rolled from the 10th to the 11th of March, as we crossed the midnight hour, I became unemployed,” he said.

Fishman said he has some employment prospects lined up, but is waiting to ensure the next move is the right one. He is currently looking at positions with law firms, corporations and nonprofits.

He even joked with the crowd.

“So, in the spirit of Yom Kippur, which of course will be upon us in only 72 hours, I’ve decided it will be OK to use tonight like an old-fashioned traditional Yom Kippur pledge drive,” he said. “Almost a bidding war, if you will.

“I have a number in my head, I won’t tell you what it is, but if one firm — any law firm — hits that number, I will pledge 10 percent of my first year’s draw to his Chabad. Take your time, be generous, I’ll see you on the way out.”

Until he finds permanent work, Fishman can be found guest lecturing and giving advice to faculty and students at Seton Hall University’s School of Law.

He calls it very important work regarding religion in the country:

“Translated, that means I’m really just the chief Jewish kibitzer at a Catholic law school, which has become really important,” he said. “Because, now that Jeff Sessions has become the (U.S.) attorney general, it is really more about Old Testament vengeance than New Testament turning the other cheek.”

Gibbons unveils portrait of Dunican — to be hung in boardroom...