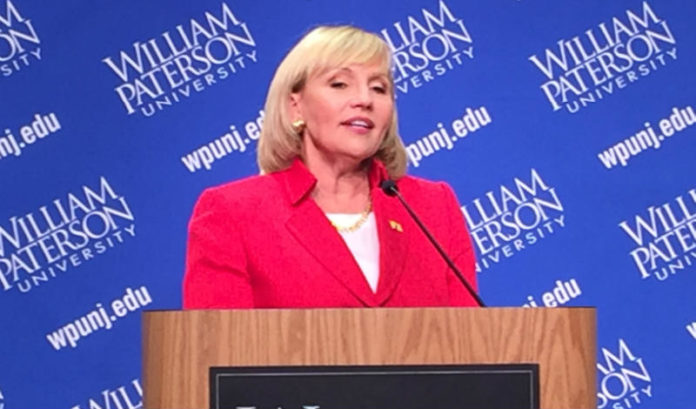 The best exchange of Wednesday’s night gubernatorial debate at William Paterson University in Wayne took place after the actual debate was over.

And when the candidates weren’t together in the same room.

Republican nominee Lt. Gov. Kim Guadagno and Democratic candidate Phil Murphy sparred in the brief post-debate media conference — both seemingly making their points better than they did on stage.

“I take that back. His only plan to pay for it is to raise taxes on the most-taxed people in the country.

“His billion-dollar plan isn’t going to begin to pay for it, so you know that everyone will end up paying higher taxes.

She kept on after a follow-up question.

“Over the last eight years, I have never seen a tax that has created a job in New Jersey. So, you’re not going to be able to grow the economy, you’re putting a wet blanket on the economy if you choose to elect Phil Murphy governor. That’s the one thing I know for sure: When you raise taxes, people go elsewhere.

“It was kind of amazing that he used the General Electric (moving to Boston) example today. General Electric left Connecticut because of the ‘millionaire’s tax,’ which is exactly the proposal Phil Murphy has made for paying for at least $1 billion of his $50 to $70 billion of entitlements.

“He’s simply trying to buy the election, and the people of New Jersey are smarter than that.”

Murphy was on his game, too.

“I thought it was a really good night,” he said. “I don’t think my opponent put a sliver of daylight between herself and the governor on the one hand. And, our side, we made the points that we needed to make, which is, we need to get this economy going again.

He fired back on his policy of becoming a sanctuary state, too, even suggesting Guadagno’s response is layered with racism.

“When residents are more willing and able to walk out of the shadows and engage with law enforcement, you get a safer community,” he said. “One of the big police unions said that a few days ago. She knows that. She’s crossing wires between immigration and law enforcement. A crime is a crime. Let’s take that person to the full extent of the law.

Murphy saved his biggest attacks for after learning Guadagno had called him a fraud.

Murphy then questioned her record.

“I don’t know (that) you have any credibility in her case, or Gov. (Chris) Christie’s case, after having presided over this economy for almost eight years. I don’t have to drag everybody through the mud again in terms of the data, but the reality is, we’ve been downgraded 11 straight times, we led the nation in foreclosed homes, household income is down, we have one of the largest long-term unemployed cohorts in the country and every expense is up, including her pet expense, property taxes.

“And I come along, God forbid, telling people the truth, trying to be the adult in the room, saying we are going to undo the stuff, saying you’ve done a really good job of taking care of hedge funds, we’re going to undo that and we’re going to plow that into the middle class, whether that’s through funding public education, funding infrastructure or making our economy fair again.

“I didn’t hear what she said; she’s entitled to say what she wants to say, but she’s got no credibility on the state of New Jersey right now, particularly the state of our economy.”

Republicans ask Murphy to give milestones, benchmarks for reopenings

Poll: Booker is well-liked; Murphy is still a bit of a...