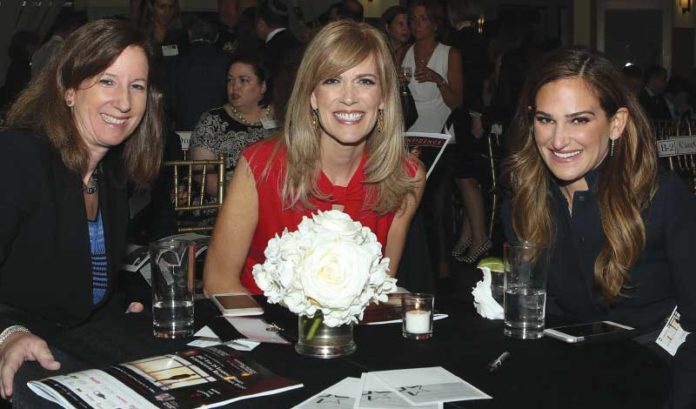 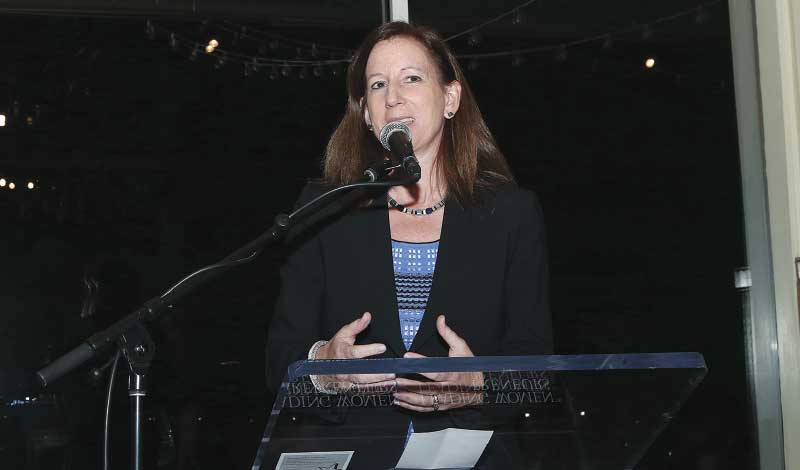 Cathy Engelbert said that when Deloitte LLP named her CEO in 2015 — becoming the first Big Four accounting firm to name a female as chief — she personally viewed it as a huge accomplishment.

“What I didn’t realize was what a big deal it was to everyone else to be the first woman CEO in the professional services industry,” she said. “I said, ‘Wow, we have got to get this from novelty to norm.’ ”

Engelbert delivered her remarks as the keynote speaker of Leading Women Entrepreneurs’ 2017 Top 25 Leading Women Intrapreneurs recognition event, held last Monday at the Liberty House in Jersey City to honor 25 women business leaders within corporations who have advocated for women and have directly turned ideas into innovative solutions for their companies.

As CEO of Deloitte, Engelbert, a Chatham resident, leads one of the largest professional services organizations in the U.S., with a presence in more than 150 countries and territories — including in Parsippany, Jersey City and Princeton — and more than 85,000 professionals providing audit and assurance, tax, consulting, and risk and financial advisory services to more than 80 percent of the Fortune 500.

Engelbert grew her 30-plus-year career with Deloitte by specializing in financial instruments, leading the U.S. audit practice, serving as a member of the board of directors and the council on foreign relations, and acting as chairman of the Center for Audit Quality governing board.

Recently, Catalyst, a leading nonprofit organization that studies women and men across job levels, functions and geographies to research women’s experience in business, also announced its election of Engelbert to chair of the Catalyst board of directors in 2018.

Engelbert is ranked on Glassdoor’s annual Employees’ Choice Awards honoring the 50 Highest Rated CEOs, is listed as one of Fortune’s Most Powerful Women and, as the mother of two children, has earned recognition as one of Working Mother magazine’s 50 Most Powerful Moms in 2016 and 2017.

Engelbert said she never specifically aspired to be a CEO.

“All I can tell you, especially our young women here tonight, is not to aspire to a title, but instead aspire to lead,” she said. “Be proud when you develop people below you who are then promoted.”

“Confidence is the No. 1 thing that I think got me to where I am,” she said. “Maybe it had something to do with playing sports or being one of eight children, with five brothers — but I have competed for everything since the day I was born.”

Engelbert said that, when she attended Lehigh University, there were four male students to every one female student.

“I was the only woman in my freshman English class,” she said. “I ended up playing two sports in college, basketball and lacrosse, and became the captain for both teams.

“I then joined a profession in 1986 that was extremely male-dominated, with single-digital female leadership. For me, again, this was about competing.”

Having the confidence to do the small things that matter, build trust and be the best she could be in her darkest moments, she said, played an important part in her success.

So did curiosity — a trait she discovered she has passed on to her children.

“I launched into my speech of how I have never met a machine with courage and empathy, and how humans and robots will co-exist. He said, ‘OK, Mom, I’m just going to have to learn to be a co-bot.’ And I said, ‘What’s that?’ ‘Co-existing with a robot,’ he said.

“I reflected on that. We do a lot at Deloitte around the work of the future and the future of work to consider how we will drive the next generation of talent.”

“They are not necessarily all that different from baby boomers, because I think they are very ambitious and they do aspire in some way, shape or form to be us,” she said. “They just want to be us by the time they are 28, thanks to Mark Zuckerberg.”

Engelbert said studies today predict that 65 percent of school-age kids will ultimately have a job that does not yet exist — as studies did back in 1999, too.

“That happened,” she said. “Data scientists, for example — we didn’t have them 10 years ago, and now we can’t hire enough of them.

“I do have a lot of optimism for the workforce of the future, but we have to continue instilling curiosity and a never-graduate attitude within the younger generation. … The world is changing so fast — artificial intelligence, machine learning, social media, blockchain, virtual reality — how can we expect our kids, if they are not curious, to raise their hands and do different things to succeed?”

Raising her hand and proposing a new way of thinking is just one of the ways Engelbert said she could stand out and get what she asked for.

“When I was asked to move to St. Louis to work with a great, big client, I was pregnant with my second child and had not yet told anyone,” she said. “So, I went to my firm and said that I would like to instead work with a client a mile from my house in the pharmaceutical industry, which I had some prior industry experience with.

“They said that they never would have thought of me for that. Meanwhile, it was the only thing I was thinking about. The lesson there is, nobody is thinking about your career as much as you are.”

Engelbert said she continuously drives to instill this culture — a culture of courage — within her employees at Deloitte.

“You can have a culture of courage around feeling entrepreneurial, around innovation, around diversity and inclusion, around raising one’s hand to take risks without being afraid of failure, around making sure that people feel that they are included more broadly,” she said. “One of the reasons we are working so hard on the future of work and the work of the future is that we want our people, especially our millennials and those in Generation Z, to feel like they work in a world that values them and that we have invested not just in shiny, new technology but also in our human capital.”

Engelbert added that there is lots more work to do, especially when it comes to empowering and educating women in the workforce.

“I recently had an opening on my executive team,” she said. “Nine men knocked on my door and asked me for that job. Zero women.

“We pride ourselves on this culture of courage, and I knew there were many women who were qualified, but why didn’t any of them walk in that door and say, ‘I want it,’ too?

“We need to think about how we are raising our hands and how aggressive we want to be in advancing our careers and the careers of others. I am tired of going to business roundtables and meetings and being the only woman in the room.”

Rider will double size of wrestling center, thanks to $500K gift...