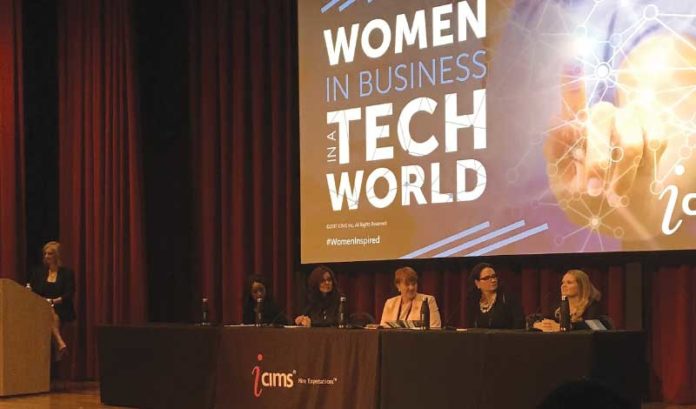 Lt. Gov. Kim Guadagno once asked New Jersey Institute of Technology President Joel Bloom why only 26 percent of the students were women.

“He said, ‘More than 50 percent of girls take advanced STEM classes in high school and graduate with advanced grades — but they’re not applying to NJIT.’

“Something is happening between high school and college that we must stop, because STEM is the 21st century job economy.”

Guadagno addressed a crowd of more than 300 at an event hosted by iCIMS, one of the largest and fastest-growing providers of talent acquisition solutions for businesses, last week at Bell Works in Holmdel. The purpose: to address the gender gap within the technology industry.

The technology industry in the U.S. has long gained a reputation for being un-family friendly, unwilling to address the wage gap and, sometimes, like other male-dominated industries, rife with harassment.

But the reasons why girls do not follow through on a career in STEM begin forming earlier — much earlier — than even high school.

According to the Journal of Experimental Child Psychology, 6-year-olds still subscribe to stereotypes that boys are better at robots and programming, even though girls who are given programming experience show a higher interest in technology and self-efficacy.

That presents a major problem for the more than 1.4 million jobs that will need to be filled in computer science by 2020, according to data provided by TechCrunch. As of today, it is estimated that just 3 percent of those jobs will be filled by women.

Here are some additional thoughts from women working in technology who spoke at one of the events last week:

“Habit, the world’s first personalized nutrition company, collects your data and makes nutrition recommendations based on your unique biology. … They test more than 70 different (data points) about you and feed them into these pretty sophisticated decision trees to create an output of what foods and nutrients are best for you. I spent the first couple weeks of my job learning and understanding the ins and outs of these trees, conducting quality assurance and control, and, in doing so, created a job for myself. I have since become the scientific ears, eyes and brains behind them.”

“I did not get the first job opportunity I interviewed for when I applied to iCIMS, but I made an everlasting impression that I was passionate for the work I would be doing if I ever had the opportunity to interview with them again. … When I joined the company, I was challenged not only with being a woman, but also a millennial in technology. I was just out of college and tasked with leading a technical team of highly tenured resources on a project, none of whom believed I could foresee the project to success — but I did. Be confident in the value that you add to your team.”

“I am a single mother with two children at home — there is no such thing as balance, but there is such thing as forgiveness. … If I am not taking care of myself, I certainly can’t take good care of my children — so, I am my own best advocate. It means saying that I cannot do certain things. Even so, when you set your calendar to do this and get this done and someone comes in and needs your time? You didn’t have that time to give, but you need to make it. And when it is to empower other women, it is worth doing.”

“Find a woman to advocate for — there was a woman I had known for many years, a great systems architect, and when my firm had an opening for the role, I went to our chief information officer and said she would be perfect for it. He said, ‘We’ve finished the interview process and are vetting a candidate, but thanks.’ And I said, ‘Wait a minute, you’re telling me that I have a qualified woman for the role and because you’re tired of interviewing people, you’re not going to speak with her?’ It was just a little switch that got turned on within him, but he said, ‘No; we can take the time.’ They hired her and she is still doing phenomenal work for them. He later thanked me for my recommendation. So, even if there is a candidate who might be good, think, is there a woman out there who may be just as qualified, who might just bring that diversity of thought to our group?”

“Personal branding is the most important thing you can do for your career. You never want anyone else to tell your story — you want to be able to tell your own. So, for example, when someone asks, what are your strengths and talents? I use very intentional language to go deeper. I say, I have a responsibility and a psychological attachment to getting something done when someone asks me to complete a task. … We are the authors of our own lives, and, if we don’t write our own chapters, someone will try to write them for us.”

“Working on my Ph.D. in Australia, I was the only one in the country working on optical networking — it was what you might call isolating. And I was desperately trying to understand if I was working on some inventive problem that made no sense at all. … One day, I traveled with my supervisor to a conference in Atlanta, and when he wanted to spend a day visiting in New Jersey, he told me to go and see AT&T. That turned into a job interview. … I’ve been here in research at AT&T for 18 years now, and once I got here, within a couple of days, the questions I had all suddenly made sense and I found I was doing things in networking that mattered.”

“I graduated from the University of Pennsylvania during the recession (expecting) to work in commercial real estate with a company in Boston that was then put on a hiring freeze. I moved to Boston anyway, worked in a small Italian deli, a nightclub and in a free internship with a woman who taught networking skills, and took computer science classes at Harvard’s evening school to learn how to program. … The company then said they had a role available with the software development team, so I spent four years working with economics and data analysts while earning my degree part-time. When Google reached out, I moved to California; then I worked for LinkedIn; and when Lyft called, I was really impressed by the talent of the people who interviewed me.”

“In 2011, my colleague got promoted. The next year, I still didn’t get promoted. So, I asked my colleague what they did, exactly, and asked to see their resume. I wanted to know, what was so fabulous about them that I was not being promoted? Their answer was, I asked for (the job). It had never dawned on me that I should be asking for my promotion. I thought it would simply be something that my superiors and I discussed. I never had the mentorship to even think that I should be the one initiating.”

“This data is from 2010, but the analysis came out last year — the number of women as primary or nonprimary inventors on a patent in 2010 was 18.8 percent; as the (sole) primary inventor, 7.7 percent. If your goal was to achieve equity in patents, meaning, 50 percent with women on them, it would take you 75 years at the current rate of growth, which, has indeed seen a five-time increase over the last 15 years.”

“I don’t want to give the impression that the issues women face in STEM are their fault. Girls are not responsible for their own lack of self-efficacy or confidence. It is the experiences that they go through in life and school that form these ideas in their heads — ideas that require serious intervention, and are not going to improve on their own. It will require a change in culture, with not just women doing something about it, but all employees and students. There are countless anecdotes about women presenting their startup with their male co-founder and the funder only addressing the male; or two girls in a lab in which the guys are always confusing their names; or a female senior graduate student always being asked by an adviser to clean the equipment; subtle things that must be called out when they happen.”