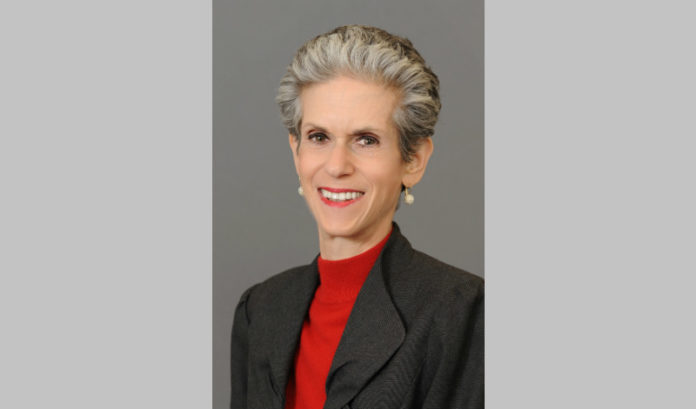 Executive Women of New Jersey, a statewide senior-level executive women’s organization committed to increasing the number of women in top corporate and board leadership, held its “A Seat at The Table: Corporate Gender Diversity Awards” on Monday at The Heldrich Hotel in New Brunswick.

The organization not only celebrated and connected companies that have appointed three or more women to their boards of directors, but released its third biennial study on advancing gender diversity in top corporate leadership at the 95 publicly held New Jersey companies in the Russell 3000 index.

“We are delighted that more than 300 of you are here today to witness the unveiling of the report,” Barbara Kauffman, president-elect and board appointments committee chair of EWNJ and chief operating officer of the Newark Regional Business Partnership, said. “In this report, we chose to focus on the role that outside influencers, such as shareholders and investors, play in increasing the number of women on boards and in the executive suite.

“Without strategies to change the status quo and consistent effort, the number of women serving on boards will remain unacceptably slow. But EWNJ does not merely advocate for diversity for diversity’s sake. We know through our research that the companies that add women on their boards not only have stronger financial performance, but also fewer governance related issues such as bribery, corruption, shareholder battles and fraud.”

Michellene Davis, president of EWNJ and executive vice president and chief corporate affairs officer of RWJBarnabasHealth, said it also is important that a company’s board be reflective of its consumer.

“Upwards of 80 percent of all health care decisions are made by the women in the home,” Davis said regarding her own industry. “We understand and appreciate the impact of having a firm understanding of your consumer, of your stakeholder community and what that means not just to your businesses bottom line but to its mission, vision and survival in changing times.

“When we say welcome to you for being here today, we mean it wholeheartedly. We thank you for understanding the incredible importance of continuing to talk about the impact, the effect and the benefit of ensuring that women continue to be not just in the room but also have a seat at the table.”

The report, created in partnership with PricewaterhouseCoopers, indicated that women in New Jersey’s top companies hold fewer than 17 percent of the board seats — and that there are still 22 companies in the state with no women on their boards at all.

“While the numbers in the absolute sense are still very low and there is much work to be done, the good news is that it is trending in the right direction,” B.J. Agugliaro, managing partner, New Jersey, PricewaterhouseCoopers, said. “For example, New Jersey companies in the Fortune 500, 24 percent of the board seats are held by women versus 20 percent nationally.

“New Jersey public companies consistently beat national averages when it comes to having women on boards.”

Agugliaro added that, within its survey of New Jersey public companies, 87 percent of board directors said that they have taken some action to increase board diversity.

“However, 13 percent of companies still have taken no action at all to increase board diversity.”

Annette Catino, former CEO and president of Qualcare Alliance Networks and keynote speaker for the event, said this isn’t surprising considering the “fairytales and myths” women have grown up hearing about women in leadership.

“I’m here today to try and dispel some of those and make sure that you all keep them in mind moving forward,” she said. “How many of us thought when we entered the workforce that if we worked hard we would be rewarded with equal pay, opportunity and promotion?

“That’s the first fairytale. Corporate America is not as equal as we’d like it to be.”

Catino said one simply need to watch television or read the news to know that the “old boys’ network” is still as powerful today as ever.

“We can look to some of the most egregious behavior that has happened in the last 90 days, at some of the biggest companies in America, where CEOs have stayed in power even after they were accused and found guilty of having done things they shouldn’t have,” Catino said. “It’s amazing that (men) are still getting away with behavior that has caused many of the problems we see in the workforce. The ‘protect and defend’ culture of men in the C-suite exists, and we have to face it.”

Still, as Catino continued to dispel the “myths” of women in leadership, she said that women, too, need to be actively willing to step up to increase the number of women at the top.

“Women have to want it,” she said. “You give up a lot when you go into the C-suite, and I think that is the biggest challenge for women. … For people in the C-suite, your life is not your own.

“That’s why baby boomer women, from my perspective, didn’t seem to want to be in the C-suite; Millennials seem more interested in it. … I also think that millennial men are beginning to think differently about their roles at home and in their partners’ lives and are willing to be more helpful. That may help things. … But it always will be a tough job that not everybody wants. I mean, none of the women who worked for me wanted my job — and I get it.”

Davis concluded the event by thanking the men in the room for being there today.

“One of our projected goals was to ensure that we had our male allies in this room,” she said. “We understand that if, in fact, every woman was to get together in one room and have this discussion, we would only be talking to ourselves.

“Having you here ensures that we are broadening the lens and encouraging you to come forward as our allies.”

Executive Women of New Jersey and PricewaterhouseCoopers’ 2017 “A Seat at the Table” report on corporate gender diversity researched companies on the Russell 3000 index as of March of this year, including 95 companies headquartered in New Jersey.

Here’s what it said:

There are now 22 publicly traded New Jersey companies, according to the 2017 “A Seat at the Table” report, that have achieved significant board gender diversity, with three or more women on their boards.

* Denotes companies that have been added to the list since 2015.

N.J. SHARES appoints four prominent execs to its board