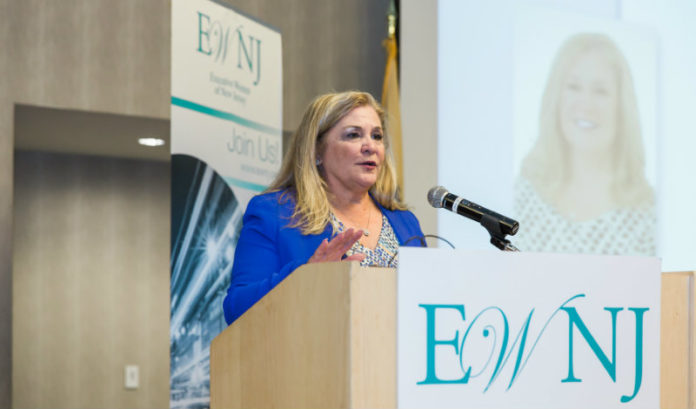 Annette Catino, former CEO and president of QualCare Alliance Networks, asked the more than 300 women and men attending Executive Women of New Jersey’s “A Seat at the Table: Corporate Gender Diversity Awards” to consider the “fairy tales” and “myths” they heard growing up about women in leadership.

“I’m here today to try and dispel some of those, and make sure that you all keep them in mind moving forward,” she said as she delivered the event’s keynote speech. “How many of us thought when we entered the workforce that, if we worked hard, we would be rewarded with equal pay, opportunity and promotion?

“That’s the first fairy tale. Corporate America is not as equal as we’d like it to be.”

Here are some other myths, according to Catino:

“There still is an old boys’ network and it is as powerful today as ever,” Catino said. “All you need to do is turn on the TV or read a newspaper and you’ll know about it.

“We can look to some of the most egregious behavior that has happened in the last 90 days, at some of the biggest companies in America, where CEOs have stayed in power even after they were accused and found guilty of having done things they shouldn’t have. … It’s amazing that (men) are still getting away with behavior that has caused many of the problems we see in the workforce. The ‘protect and defend’ culture of men in the C-suite exists, and we have to face it. Some of you will be brought into a meeting or into circumstances where you will be part of that request, and it is going to take a lot of courage and strength to be able to stand up and say, ‘I won’t be a part of it.’ But you need to.”

“I can’t tell you how many times I’ve gotten a call from a male board member or CEO who asked me if I knew any good women executives,” Catino said. “And my response was, why don’t you? It’s unconscionable to me that they would actually say that out loud.

“But, whether we started in middle management or rose up through the ranks, how many of us have really had the opportunity to be in front of board members? That’s where board appointments come from — other board members. While we know that the professional associations and women’s groups are all trying to convince headhunters to bring more women candidates to boards, the majority of board nominations come from the boardroom. If you don’t have exposure to other board members, they won’t know you exist.”

“One woman is not enough,” Catino said. “I am a very strong woman, but, even so, it’s not enough. You really need at least two women to start an active dialogue about what a difference diversity makes on your board. And when you get to three women, like we have at Northfield Bancorp, it’s sustainable. It becomes an automatic part of the culture so that, when a woman retires, you think immediately about replacing her with another woman.

“When I would look to (the board at QualCare) to appoint somebody, they kept appointing the CEO and the CFO and the chief medical officer — all men. I’d say to them, ‘Come on guys, put a woman on this board; you’ve got a woman running the company, can’t I get a woman on the board?’ But my first woman board member, while I was very excited about her, was a disaster. She came into the boardroom with all the wrong skillsets, the wrong personality and the wrong delivery. As a result of that first appointment, when the next opening came, my board was very hesitant about appointing another woman, because she didn’t act like a board member. You have to be careful about who goes into the boardroom, because that first position will make all the difference in the world.

“The first woman who gets on a board also has a very important role. The weight of the world is on her. All the other guys in the room are trying to see how she’s going to act. Is she going to be worried about the fluffy things or is she going to want to know about the numbers, the profit and loss, what the strategic plan is and succession planning? Those are important board governance issues, and women who gravitate toward those issues will be considered very important board members and will make their position sustainable.”

“While 90 percent of U.S. companies are ‘committed to both racial and gender diversity,’ less than 20 percent of the Fortune 500 have women on their boards and, as we’ve seen, less than 10 percent of them have women in the CEO seat,” Catino said. “I would venture to say that every company in the report has a formal corporate policy on diversity in the workforce. But it doesn’t happen in the C-suite and therefore it is not happening in the board room.

“There was a report issued in early 2017 by LeanIn.org in consultation with McKinsey & Co. that talked a lot about gender and race equality and diversity in the workforce. It said that it really starts at the senior and middle management level, because our middle managers are the ones cultivating and developing younger managers. If that is the pool of people we are pulling from, we’ve got to make sure that our middle managers understand just how diversity of both gender and race is important in our pool of candidates for managers.”

“We know that isn’t true — black Americans, Latino-Americans and Asian-Americans have even less corporate board positions,” Catino said. “It just doesn’t make any sense in this day and age.

“When it comes to board service, while I strongly believe in management, I really believe that my role there is to represent the shareholders and the employees and to hold management accountable for their performance. Performing at the highest level for boards cannot be accomplished when all the board members look, act and talk the same.

“You need that diversity of thought and opinion, and you need people to speak up. A lot of these men who sit in boardrooms are there only because they’re part of a network and they got the invitation.”

“Politics is politics,” Catino said. “What’s going on in the board room is sometimes very secretive, and it does become a kind of club. There is a culture with a board and the board tries to keep (it); they don’t want to bring outsiders in to disrupt that culture. They like the way things are going.

“It’s only when companies get into trouble that they look outside of their normal processes.”