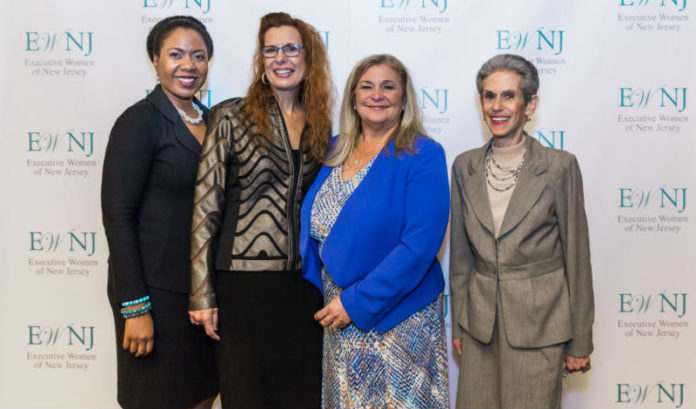 Getting to the C-suite is not necessarily a step to a seat on a corporate board. What type of position you have — and what responsibilities come with it — are bigger barometers for women looking to climb the corporate ladder.

So said Annette Catino, the former CEO and president of QualCare Alliance Networks and current board member for Northfield Bancorp.

Catino, the keynote speaker at the Executive Women of New Jersey’s “A Seat at the Table: Corporate Gender Diversity Awards” held Monday at the Heldrich Hotel and Spa in New Brunswick, said it is imperative that women aspire to roles that include profit-and-loss responsibilities and are accountable to meeting budgets.

“Those positions don’t necessarily have the visibility in the corporate world to be in front of board members and enough outside customers to get the (support) one needs so when a board seat becomes available, (their) name comes up.

“We have to recognize that within ourselves and try to change that — if we don’t, this phenomenon alone is going to self-select women out.”

Michellene Davis, the president of EWNJ and an executive vice president and chief corporate affairs officer at RWJBarnabas Health, agreed.

“How many (top female executives) are in positions of accountability?” she said. “How many of them have P&L responsibilities — are really given great stretch assignments so they are beginning to develop bandwidth and the experience that a board is going to think about and talk about?”

Davis said she has been afforded those opportunities throughout her career and understands how much they have helped build her resume.

“I’m grateful that (RWJBarnabas Health CEO) Barry Ostrowsky has given me so many stretch assignments,” she said. “That has enabled me to really acquire such a depth of experience in a variety of silos, as a result, there are not many things that I haven’t experienced.

“Being able to have a consciousness discussion with individuals from finance or individuals of other aspects of institutions, which, quite frankly, are exactly the skill sets that transfer to board consideration.”

Catino said women who want to reach the board level need to actively seek it out.

She said that, at 40 years old, she made the decision that she would have a corporate board position by the time she was 50.

“Somebody was going to pay me for my brain,” Catino said. “So, at the age of 40, I started telling everybody I met that I wanted a corporate board seat at a public company.”

She reached her goal. And, after doing so, realized even more that the job isn’t for everyone.

“We have to recognize that women are still balancing whether they have children or not,” she said. “Being able to be out five nights a week and entertain on Saturdays and Sundays isn’t necessarily always in the cards. And if you don’t recognize and accept that, then I think you’re fooling yourself.”

In the end, Catino said, women must really want — and be available for — both a C-suite position and a board seat.

“You give up a lot when you go into the C-suite, and I think that is the biggest challenge for women,” she said. “For people in the C-suite, your life is not your own.

“It always will be a tough job that not everybody wants.”

There is hope, Catino said. While some say the millennial generation is not as committed to their careers as the previous generations, Catino isn’t so sure.

“Millennial women also appear to be more interested in the C-suite,” she said. “In my experience, not many women have wanted to be in the C-suite over the last 20 years — I tried to find even within my workforce people who wanted to succeed me in my job, and nobody wanted it.”

Wakefern to use more sustainable containers in its 280 stores