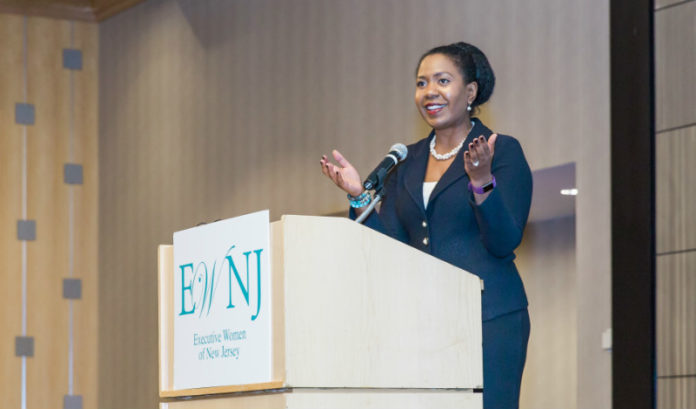 “A Seat at the Table,” the well-regarded biennial report released Monday by the Executive Women of New Jersey, tracks the number of women getting opportunities at both the executive level and board level of major companies in New Jersey.

And, while the report showed New Jersey companies are ahead of similar companies across the country, it also suggested there is plenty of room for improvement.

ROI-NJ talked with the group’s president, Michellene Davis, an executive vice president and chief corporate affairs officer for RWJBarnabas Health, about what New Jersey companies can do to improve the situation.

ROI-NJ: How did we get to where we are today — and is enough being done?

Michellene Davis: It’s always a good thing when companies or government or anyone begins to take a second look at, ‘Have we been inclusive enough?’ But, when they do that, they have a tendency of erecting the age-old model of a chief diversity officer or an office of diversity and inclusion. I think that came about at a point in time when folks wanted to be able to do something, take some action. That intent, at one point, was really good. Let me tell you what I’m thinking now.

In 2017, what we have realized is that we’ve had a historical precedent of whether or not that has kept up with the times. I think, in the early 1980s, we really saw that wave of that diversity and inclusion speak. I think what we now see is how that particular model has not caught up to where we are now. It, too, requires transformation, transition, conveyance and change. When I say that, I mean simply having this one-off office has not done the job; it has not gotten us to where we want to be. I think it’s imperative that we really understand the difference between diversity and inclusion speak, equality and then equity.

ROI: Tell us how you see it.

MD: Equity and inclusion is the way I like to refer to it now. Just because everyone is equal does not level the playing field. There’s a fantastic graphic of having folks of different heights stand on the same-size box. The problem is, that disparity in our height still exists, which means we’re not able to grab the prize. Leveling the playing field, that’s what equity is.

More than that, we need to make certain that it’s not just some one-off office that, oftentimes, is marginalized. Initially, it is given a budget, given a staffer or two. And, over time, both of those things seem to wane away. So, one of the things I think really works is, the Obama administration made sure there was health in all policies. We need to make sure there is equity in all policies. That way, it is not just up to the chief diversity officer, it is up to the chief marketing officer and the chief strategy officer and the chief operating officer. How am I ensuring that I am creating an equitable playing field for all? Not just whether or not someone is going to put together a program, but whether or not each and every one of our senior management officers understands that they, too, are going to be accountable for not just whether they create a small window of opportunity, but how are they contributing equity to the organization. What are you doing other than just making sure you are considering one women in a slate of candidates, but how many women, how diverse are they: by background, by qualification, by ethnicity.

Those are some of the things that we’re really starting to talk about more. This is a broader, wider, deeper lens.

ROI: Annette Catino, the former CEO of QualCare, said in her keynote that she feels women not only need to reach the C-suite, but get there in the top executive positions that translate to a higher level. Do you agree?

MD: Absolutely. How many (top female executives) are in positions of accountability? How many of them have P&L responsibilities — are really given great stretch assignments so they are beginning to develop bandwidth and the experience that a board is going to think about and talk about?

I’m grateful that (RWJBarnabas Health CEO) Barry Ostrowsky has given me so many stretch assignments. That has enabled me to really acquire such a depth of experience in a variety of silos; as a result, there are not many things that I haven’t experienced. Being able to have a consciousness discussion with individuals from finance or individuals of other aspects of institutions, which, quite frankly, are exactly the skill sets that transfer to board consideration.

ROI: That sounds great. But how does it happen?

MD: Women need to make sure that they are not pigeonholed into certain positions. I was asked to take on a human resources role lots of times and I kept saying, ‘No, that doesn’t fit my career trajectory.’ I had to say, ‘No,’ five times. They heard it the fifth time. Then, we went on to something else. I have a background in policy, I was the acting state treasurer, I have run a $2.4 billion organization, the New Jersey Lottery, so this is my sweet spot. This is who I am; this is who I’m going to continue to be.

ROI: The report talked about how some organizations are starting to make progress. How do you push them to do more — even when you know so many others have done so little?

MD: You get to say, ‘Congratulations. We’re delighted you’ve begun doing this, but because you have, you are also a leader. So, let’s lean into your leadership by doing just a little bit more by literally making certain that you are doing in a way that’s padding the pipeline to make certain that you are creating a succession plan for your women leaders — and ensuring that there are opportunities for them to transition upward as well.’

ROI: The report said there has been progress. But progress is more than just numbers. Are there things you are seeing that make you feel good about where New Jersey companies are headed?

MD: What we’re beginning to get now are calls from CEOs saying: ‘Some of this we’ve done right, others we’re not doing so well. So, will you come in and help us?’ We want to be that vital resource to them because this is not a ‘No, but,’ this is a ‘Yes, and’ conversation.

I think, if we always do what we’ve always done, then we’ll always get what we’ve always gotten. And that has gotten us the numbers that are not acceptable. New Jersey already is above the national average, we just need to make sure we are setting a standard that we can all be proud of.

If timing is everything, let’s hit pause button on casino smoking...