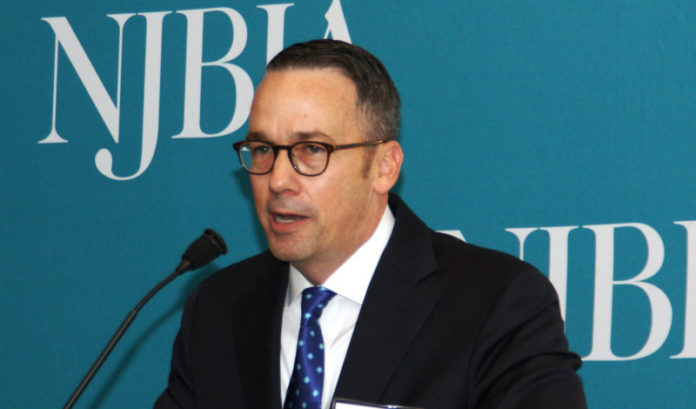 Talking Points is an occasional feature in ROI-NJ that recaps key speakers at business gatherings across the state. William Castner of Horizon Blue Cross Blue Shield of New Jersey spoke about the role of technology in health care advocacy at a New Jersey Business & Industry Association event Wednesday.

William Castner, senior vice president of corporate and regulatory affairs for Horizon Blue Cross Blue Shield of New Jersey, said the effects of disarray in the nation’s capital are trickling down to the state level and causing higher-cost health care.

“The neglect of Washington, D.C., is the single biggest cost driver this year on the individual market,” Castner said. “Three-fifths of our premium increases — and Horizon had about 70 percent of the individual market — are directly attributable to the decisions made by the current administration.”

That includes not enforcing the individual mandate, not funding subsidies for insurers for Affordable Care Act marketplace enrollees and continuance of the health insurance tax.

“Although most New Jerseyans get health insurance from employers, not the individual marketplace, this impacts a lot of us, because the less insurance we have, the higher uncompensated care, charity care is driven up, having a punishing effect on New Jersey hospitals and our health care economy in general,” Castner said.

But individuals are also punished for accessing health care.

“Medical debt remains the No. 1 source of personal bankruptcy filings in the United States,” he said.

So how does technology play a role?

“This idea of ‘repeal and replace’ have been discussed for eight years. This was supposed to be a layup for the president and the new Congress, and they hit a buzz saw almost immediately,” Castner said. “I attribute that in large part due to the digital mobilization, and in part partisan politics, and in part driven by labor unions — but oftentimes organic uprising of residents who felt that health care access was being threatened by the decision makers in Washington.”

That was evident on social media, and has trickled into congressional races like that in U.S. Rep. Rodney Frelinghuysen’s 11th District. Frelinghuysen is chairman of the House Appropriations Committee and voted for repealing when other Republican representatives from the state didn’t.

“This is a congressional district, by the way, where a plant was on the ballot against the congressman. This is a total dead zone for Democrats,” Castner said. “Now, you have an uprising in that district.”

And that has all happened through social media postings, live videos, texts and emails. It was also evident in contentious town halls that congressmen held during the time the bill were being debated.

But advocacy has also had an effect locally on health care. Take, for example, the still-unpassed out-of-network legislation that Trenton has been trying to finalize for almost a decade.

“We have four out of five physicians who are in Horizon’s network, and yet you have a microscopic number of largely specialists and super-specialists who are out of network and driving up the cost of health care astronomically in the state of New Jersey,” Castner said. “And they have been a complete buzz saw.”

“And I tip my hat to them in terms of their advocacy efforts. They’ve been very well organized, and they are very well financed. They have been successfully playing defense for eight years on any, even the most moderate and mildest of reforms related to out-of-network costs. The only way a highly-financed, highly-organized constituency like that can be overcome is if enough voices rise up and agree to tackle the issue.”

The solution is to engage in social media to make a dent, Caster added.

“Ten years ago, legislators had a pretty standard playbook when it came to their own election,” he said. “You do six mail pieces and, if you need to, you do a little radio, you get the local editorial endorsement, you knock on doors and call it a day.”

But social media, with its various avenues of advertising and promotion of content, can disrupt the usual avenues of messaging. And, with New Jersey being a state that is very interested in keeping the status quo, the entrance of new messaging stands to have a large impact, he said.

“I don’t think enough legislators are (wrapping) their arms around what type of seismic impact social media can have in terms of public awareness and public advocacy,” Castner said. “Digital advertising … is an extraordinarily cost-effective alternative to traditional TV, radio and billboards.”

Marc Berson concludes term as chair of RWJBarnabas Health board of...