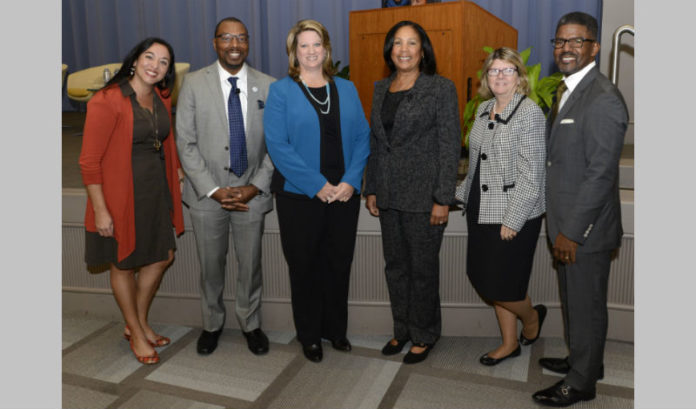 Clint Wallace said he isn’t the type to do something in the business world and get nothing in return.

As the head of human resources, North America, for Sanofi, he expects any project the company takes on will produce results.

“The ERGs (should not be there) to check a box and say, ‘I have the traditional ones,’ ” he said. “It’s got to be there to answer or help or enable a need that exists in the company.

“For us, this is a group of people who are volunteers, self-guided and leveraged by leadership. If you have ERGs and they’re not playing a role with regard to your strategy, then you’re wasting your time. These are a group of people that you’ve got to put to work.”

Wallace was one of the panelists Tuesday at an event sponsored by Sanofi and Aon, “Beyond the Numbers: Driving Value through Diversity & Inclusion,” at Sanofi’s headquarters in Bridgewater.

Wallace, along with Merck’s Mirian Graddick-Weir and Public Service Electric & Gas’ Margaret Pego, discussed the impact diversity initiatives can play at a company.

Moderator Roger Crockett, a senior partner at InQuest Consulting, implored the group to discuss how diversity in itself has little value to companies.

“Diversity is the mix; inclusion is making that mix work,” Crockett said.

The panel talked about how various employee resource groups, traditionally known as ERGs, are now called employee business resource groups to show their connection to the bottom line.

“We added ‘business’ because we wanted everyone, including the participants themselves, (to know) that they are there to help support the business first and foremost,” Graddick-Weir, Merck’s executive vice president, human resources, said. “That was a very important change.”

Graddick-Weir talked about how Merck leveraged its EBRGs in a variety of ways, including making sure the company’s new campaign was not offensive to any group and to increase the depth of the company’s clinical trials.

The groups, however, were not all about ethnicity or gender. Graddick-Weir talked of how a group of millennials is helping to shape the company’s policies moving forward.

“We’ve been leveraging them to help us look at all aspects of our HR policies to figure out how to contemporize them, whether it’s paid leave, performance management,” she said. “We got them in, and they’ve helped us enormously to think about how we might evolve them over time.

“When you have a workforce like we do, with four generations in place, you can’t just flip a switch. They’ve helped us to say, ‘If you want to be an attractive place for millennials to join, here are the Top 5 you probably ought to think about changing.’ ”

“We have about 20 of them, representing anything you can imagine,” she said. “It’s not just females or people of color.”

In fact, a group filled with those passionate about the environment helped the company with its business case for nuclear energy.

“It’s an environmental group that gets together to talk about issues that are of concern to PSEG, because we impact the environment in many ways,” she said. “Last year, we leveraged them when launching a campaign called ‘New Jersey needs nuclear.’

“We brought in our EBRG to talk about the business case to keeping our nuclear plants alive.”

Reaching past the scope of ethnicity and gender is a key at Sanofi, Wallace said.

He pointed to how a group of veterans helps the company’s bottom line.

“When you look at a veteran’s resume, most people who have not been a part of the armed forces cannot decipher what does this mean in the corporate world,” he said. “This is where the members of the veterans ERGs matter. Because they can help decipher this resume. Break down the code and say, ‘This is the strength this person can bring to this organization based on what they did in the military.’ ”

The panel said making sure everyone is aware of what these groups are doing is as important as the work they do.

“Don’t do things in silence,” Wallace said. “When you go to an ERG meeting, go back to your boss and tell him what was discussed, because, in the absence of having that kind of output back, people kind of make up stuff and it’s never good.

“Go back and talk to them about what you did. Invite them to come. There’s no secret society. They can be part of what’s being discussed or maybe they have a perspective that your team members are not even aware of.”

Pego said it’s important for the employees’ efforts to be recognized.

“It takes time to execute a lot of them, and we found that managers were not giving employees credit for work that they were doing to contribute to the EBRGs,” she said. “So, we’ve asked them to build those into their objectives, so that becomes a part of how they are evaluated at the end of the year, because some of them really do spend a lot of time on activities that are moving the needle inside the company.”

These groups, Wallace said, also can be beneficial to their members’ climb in the company.

For Wallace, it comes back to not doing something for nothing. EBRGs need to be supported financially. Wallace uses that as a learning tool.

“If they want to do something big and major, (we tell them to) come make a proposal,” he said. “This serves as a training opportunity for them as they ascend in the organization.”