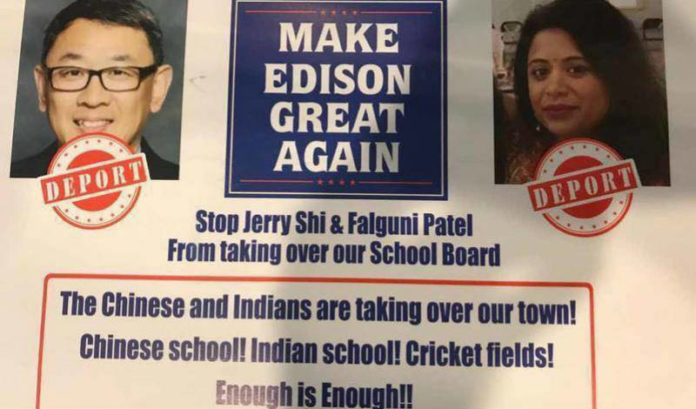 The director of the Edison Chamber of Commerce board said he thinks the hate-filled, race-baiting political mailer that is receiving national news just days before state and local elections will not tarnish the diverse economic brand Edison has built in recent years.

“There’s no place for that type of flyer in Edison or anywhere in Middlesex County,” Arthur Cifelli said. “We are stronger and bigger than that.

“One act of a bigot is not going to define or weaken the resolve of Edison.”

The flyer, which was sent to an undetermined number of residents of Edison, had the images of school board member Jerry Shi and his running mate, Falguni Patel, with a stamp labeled “Deport” over them.

“Stop Jerry Shi and Falguni Patel from taking over our school board,” the flyer reads.

“The Chinese and Indians are taking over our town! Chinese school! Indian school! Cricket fields! Enough is enough!!”

The author of the mailer vents frustration over a large Asian population in Edison and asks to “Make Edison Great Again,” mimicking a slogan from President Donald Trump’s campaign.

A year ago, Trump was in Edison wooing non-voters at a charity event and uttered the phrase, “I love Hindu.”

Asians make up nearly one half of the town’s approximate population of 100,000, which makes it the fifth-largest municipality in the state.

Edison chamber President Joe Coyle said immigrant-owned businesses are a significant contributor to the economy, and exceed 75 percent of all small business and retail in some areas of the town.

From an economic tax standpoint, Coyle said losing immigrant-owned businesses would have a devastating impact on the town.

“It’s a huge economic stability for our revenue,” Coyle said.

Cifelli said the diversity has made Edison a microcosm of the entire state.

“New Jersey is a diverse state; Middlesex County is one of the most diverse in the state,” Cifelli said. “We’re better and stronger because of all those businesses.”

And not just from an economic standpoint, Cifelli said.

“There’s an ancillary benefit as well — those of us that are not part of those cultures or ethnic backgrounds begin to learn and become so familiar with not only their business practices but also their traditions and customs,” Cifelli said. “It’s been nothing but wonderful.”

The mailer does not identify what person or group paid for it, which violates state election laws.

On Tuesday, Edison residents will vote for mayor and other local officials along with choosing the next governor.

Rajiv Parikh, a partner at Genova Burns and general counsel to the New Jersey Democratic State Committee, said the committee views the mailer as an attempt to suppress the vote, something he said the committee takes very seriously.

“Sending something like that is sending a message to the voters that they are somehow different,” Parikh said. “The bottom line is, anyone who has the right to vote in this election on Tuesday should.”

Local and election authorities are investigating the origin of the flyer, which did not appear to be from any official political campaign.

“The New Jersey Democratic State Committee will increase the presence of our volunteer election protection lawyers in Edison on Election Day to ensure there are no further attempts to suppress minority voters,” Parikh said. “If we learn of additional information, then we will be prepared to take appropriate action.”

Edison’s current mayor, Thomas Lankey, who is running for a second term, issued a strong statement, vowing to find whoever is behind it.

“Edison has proudly embraced our ethnic, cultural and religious diversity,” he said. “It has become a sad reality that, in our polarized political atmosphere, some people suddenly feel empowered to publicly express these vile nativist ideas.

“Make no mistake, we will do everything we can to expose the shameful people behind this.”

U.S. Census data analyzed by New American Economy shows the impact of Asian-Americans and Pacific Islanders have throughout the country.

“In 2012, firms owned by Asian-Americans generated $707.6 billion in total receipts and sales, the highest total of any minority group in the United States,” according to NAE. “AAPI business owners also employed more than 3.6 million U.S. workers that year, once again a higher figure than other comparable groups.”

Halvorsen: Crackdown on immigrants could be disastrous for food service industry