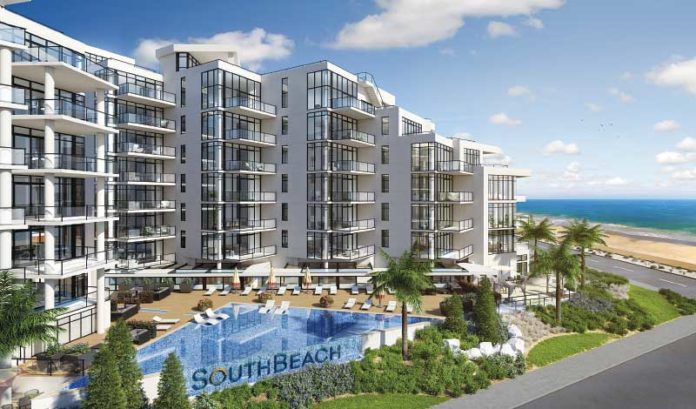 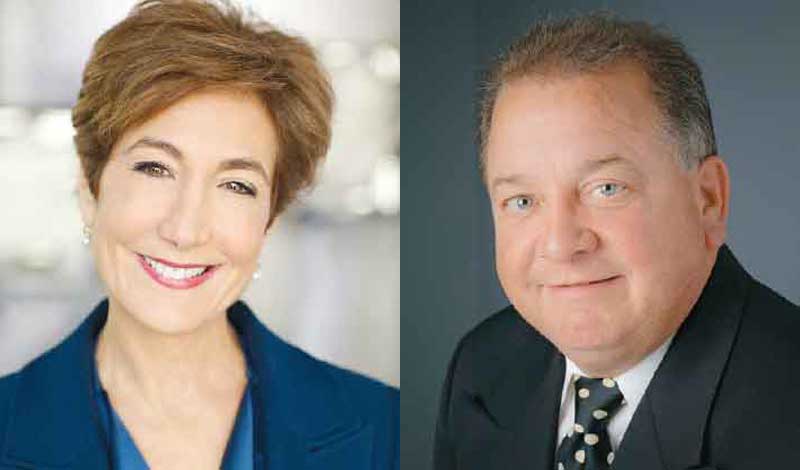 You can say South Beach at Long Branch, the $50 million-plus high-end modern luxury condominium complex scheduled to open at the Shore in the spring of 2019 — featuring units that start at $1.2 million — was inspired by the famed strip in Miami Beach, and you wouldn’t be wrong.

There’s the fact that the interiors are being imagined by a Miami-based designer.

And there’s this proclamation from developer Mimi Feliciano of FEM Real Estate in Montville: “We wanted to bring the luxurious and tropical feel of South Beach to Long Branch, and that is what we’ve done.”

But, if you dig a little deeper, you’ll find the origin of this two-towered, 47-unit project — filled with amenities you’ll struggle to find anywhere else in New Jersey — came from a “fabulous” weekend trip several years back.

“We hadn’t been to the Shore in years,” Feliciano said. “We had so much fun, but it was far — it was three hours later by the time we got back home.”

A month later, she said, she saw an advertisement in the paper for a townhome in Long Branch — right off Exit 105 — with concierge services.

“I thought, ‘Where is that?’” Feliciano said.

She and her husband, Edwin Feliciano, co-founders of FEM Real Estate, decided to visit and have drinks at the Ocean Place Tiki bar.

“That’s when we said, ‘We could make this work for ourselves,’” Mimi Feliciano, the CEO, said. “So, we bought the townhome, and we loved it.”

And then they quickly outgrew it.

The Felicianos, however, knew they had stumbled onto a winning idea.

The location — and its potential market capture — was easy to see.

“Long Branch is the first main shore point destination at the Jersey Shore,” Mimi Feliciano said. “That was critical.”

So, the real estate investors and developers set their sights on another lot — and another project — in which they could build 11 units, including a bigger townhome for themselves.

“Then we said, ‘Let’s go to South Beach and get inspired,’” Mimi Feliciano said. “We saw fabulous places that were both boutique and stunning. Everything was fun, very edgy and very beautiful.”

When they returned to New Jersey, the project took on a life of its own.

The Felicianos brought their design ideas to the Long Branch Planning Board in 2013.

Mimi Feliciano said the group loved them — and only had one suggestion.

The site for South Beach at Long Branch, therefore, is the result of the acquisition and assemblage of six parcels — three owned by the city, one cleared lot and two sites where single-family residences had been — on nearly 1.7 acres at the corner of Ocean Boulevard and North Bath Avenue.

“It’s always challenging to build by the ocean, with the dirt never being the same as it is inland and the constant sand and wind,” Mimi Feliciano said.

But the results will be stunning, she added.

Designed by architect James Monteforte of Monteforte Architectural Studios in Ocean Township, the two eight-story tiered towers located just across the boardwalk will feature ocean views through floor-to-ceiling glass and from private balconies with either fireplaces or firepits ranging from 144 to 1,728 square feet, Linda Husti, president of FEM Real Estate, said.

“While difficult to build, the building’s structure is designed to have these interesting geometric patterns so that each and every one of our residence owners, whether their unit is in the front, middle or back of the building, will have fabulous ocean views,” Husti said.

Some units even will have three-sided panoramic ocean and shoreline views, Edwin Feliciano said.

“You will see the most spectacular sunrises and sunsets from your home,” he added.

Private rooftops also will be offered for penthouse residences, while ground floor residences will have private patios
and gardens.

“South Beach at Long Branch is all about catering to a maintenance-free lifestyle,” she said. “We have tried to make every single feature simple.”

With contemporary, upscale touches such as Italian porcelain and cabinetry, each two- to four-bedroom unit, ranging in size from 1,350 to 3,380 square feet, also will have private elevators that open directly into each residence and two to four assigned underground parking spots.

Both Husti and the Felicianos said they already have received requests — and have put plans in place — to combine residences.

In addition, South Beach at Long Branch will offer residents a ton of communal amenities, including a salt water infinity pool with a waterfall, sandy areas and raised sun decks; lush landscaping, including windmill palm trees; first-class concierge services; and a high-tech, 24/7 gym.

The condominium complex will be located just two blocks from Pier Village, a mixed-used retail center with more than 30 shops, restaurants and entertainment venues.

And while the area will offer many attractive options to residents at South Beach at Long Branch, Mimi Feliciano said Pier Village won’t meet all of their needs.

“So, we decided to invest in a full-kitchen and private dining club with on-site chefs.”

The seasonal private dining club will seat between 50 and 60 and also will guarantee takeout for homeowners, she said.

“You could go onto your deck, with your fireplace and the view, and have dinner in the summer outside,” Mimi Feliciano said.

One option the Felicianos are considering is inviting different chefs to come cook on the weekends.

In addition, four hotel-style suites with private kitchenettes also will be made available to residents’ guests.

“One sleeps two, another sleeps three and two sleep four, for a price of around $200 a night,” Edwin Feliciano said.

With nearby hotel rooms costing as much as $700 per night in the summer, Mimi Feliciano said, she expects that amenity to prove very popular.

“It is convenient and nice to have your guests on your property, but not necessarily staying in one of your bedrooms,” she said. “It gives you a little separation.”

Visitors need not worry about another Hurricane Sandy, either. The first floor of South Beach at Long Branch will be nearly 30 feet above sea level, maximizing views — and expediting the Coastal Area Facility Review Act process.

“Although we wound up with a new boardwalk, honestly, there were very few issues here with flooding,” Mimi Feliciano said. “But, you know, our glass — which is inches thick — is tested to withstand over 120 mph winds. So, we’re still prepared.”

The Felicianos intend to make South Beach at Long Branch their own seasonal residence. And they hope the complex has enough to make anyone want to stay there 24/7. But they also realize the key to the complex’s success is its connection to the rest of the area.

With at least four nearby options to get to other parts of New Jersey and into New York City — by car, train, bus or ferry — the Felicianos feel they are able to entice people from all over to come to the area.

“Long Branch is the first real Jersey Shore when it comes to those traveling from the New York City and Staten Island areas,” Mimi Feliciano said. “From a business and feasibility standpoint, it made sense to try to capture that market.”

Edwin Feliciano said that, in doing so, they hope to make Long Branch a market of its own.

“We really felt that Long Branch was an up-and-coming neighborhood due to the redevelopment of it all,” he said.

Still, while the team always had anticipated a strong level of interest from New York City buyers, Husti said they also have been pleased to see just as much from buyers in nearby areas such as Manalapan, Colts Neck, Red Bank and Marlboro.

Nearly 17 percent of the condominiums already have been sold since opening for sales in September.

“The developers have elected to sell the units in the middle of the building first,” Husti said.

That is by design, she added, as not all units have been released for sale.

“South Beach at Long Branch is going to be a slice of paradise for those who live here,” Edwin Feliciano said. “People want to be on vacation, whether it’s a Wednesday or the weekend, and we wanted to build that permanent getaway for our homeowners.”

One you won’t find anywhere else, Mimi Feliciano said.

“We wanted the convenience of New Jersey but the feel and style of South Beach, Miami,” she said. “This is something we really believed in and wanted to have as a lifestyle for ourselves.

“It is so unique that you will not see another building like this built at the Jersey Shore.”

Mimi Feliciano, co-founder and CEO of FEM Real Estate, said her company’s creation of South Beach at Long Branch acted as a stimulus for the redevelopment of the Beachfront South area.

“Pier Village was done. The redevelopment of Beachfront North was done. Nothing had been touched here,” she said. “Somebody had to put a stake in the ground. We took the risk as the first one of this row on Beachfront South to develop.

“Now, you’ll see, there are holes of dirt all the way down — hundreds of units will be coming on the market.”

The Felicianos said they are not concerned.

“Every property next to us is being developed, and so is Broadway, but are they competing with us? That’s a different question,” Mimi Feliciano said. “We are in a bracket all our own.”

Edwin Feliciano agreed: “Our competition already has accepted the fact that we alone are the boutique of the Shore right now.”

As a market leader, Mimi Feliciano said that she is proud and excited to be at the forefront of the revitalization of Long Branch.

“Long Branch, which has provided incentives for everyone in the redevelopment zones to develop, and rightfully so, also is upgrading the train station,” she said. “The town is committed to its redevelopment, and there are certainly benefits to developing here in Long Branch, as opposed to any other town.”

Past perfect: CHA architect explains how she incorporates history into modern...