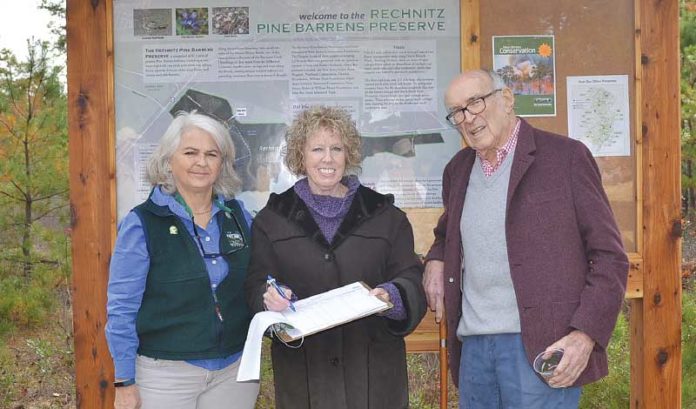 New Jersey Conservation Foundation’s mission is to preserve land and natural resources throughout New Jersey for the benefit of all.

As a statewide conservation leader, we:

In the coming year, we will work to complete many land preservation projects that are “in the pipeline,” including the establishment of a new 1,000-plus acre preserve in the Sourland Mountains of central New Jersey and the protection of family farms in the Delaware Bayshore, New Jersey’s agricultural heartland. We will also continue to protect habitat for a diversity of New Jersey’s native plant and animal species.

Our land acquisition program preserves farmland and natural areas throughout the state, often in partnership with local and county governments, the New Jersey Green Acres Program and State Agriculture Development Committee, and federal conservation programs. Our policy staff advocates for strong land conservation policies at the local, state and federal levels. Our stewardship team cares for over 25,000 acres of conservation lands, protecting the habitats of many rare plant and animal species.

In 2016, we preserved more than 3,200 acres of open space and farmland in several New Jersey regions, including the Pine Barrens, Delaware Bay Watershed, Highlands and Sourland Mountains. This year, we celebrated the opening of two new public nature preserves: the Mount Rose Preserve in Hopewell Township, Mercer County; and the Rechnitz Pine Barrens Preserve in Pemberton Township, Burlington County. At a time of unprecedented efforts in Washington, D.C., to rescind and weaken environmental laws and regulations, we launched a bipartisan effort to get New Jersey’s congressional delegation to sign a set of “Principles to Protect New Jersey’s Public Lands, Water, Air & Wildlife.” We continued our vigorous defense of preserved lands against threats like gas pipelines.

Funding comes from individual members and donors, charitable foundations, corporations, clubs, educational institutions and organizations. Every two years, we have a large fundraiser known as Field & Fashion. We also receive county, state and federal grants, each targeted toward a specific land preservation project.

The individuals and companies that support us generally have a strong interest in nature, the outdoors, wildlife, clean water and a healthy environment.

We’re supported by over 2,500 foundations, corporations and individuals. Some of the foundations that support us are the William Penn Foundation, Geraldine R. Dodge Foundation, F.M. Kirby Foundation, Victoria Foundation and 1772 Foundation.

On Nov. 4, we dedicated the Rechnitz Pine Barrens Preserve, named for philanthropists Joan and Robert Rechnitz of Monmouth County. A generous gift from Mr. and Mrs. Rechnitz helped New Jersey Conservation Foundation purchase and preserve nearly 2,400 acres in the Pine Barrens in 2015-16, including the new 811-acre preserve in Pemberton Township. The dedication ceremony was attended by about 60 people and included the unveiling of an information kiosk, an education program on native Pine Barrens snakes and a hike along a new trail on the property.

Study: N.J. tops list of states with the worst roads