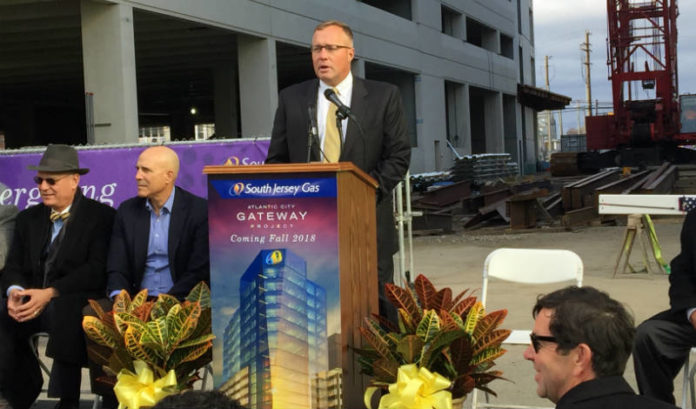 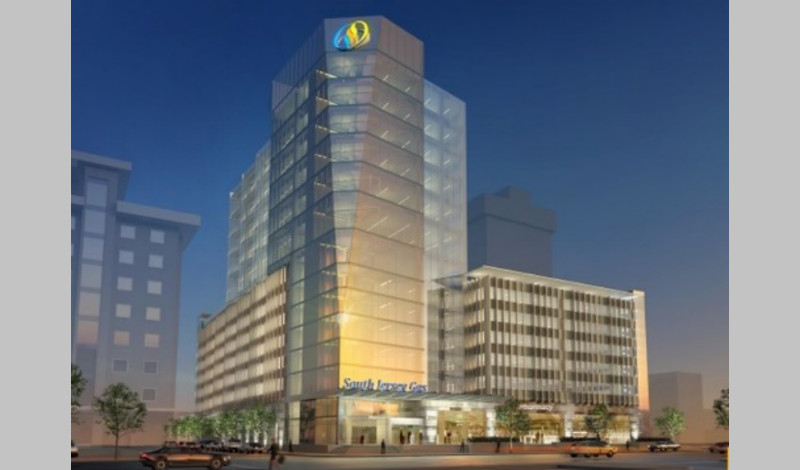 The $220 million Atlantic City Gateway Project celebrated another milestone Wednesday afternoon with a topping-off ceremony for the new headquarters of South Jersey Gas that drew numerous dignitaries from around the city and county.

The company’s new six-story, 75,000-square-foot facility may indeed be all that.

While its modern workplace and modern amenities will allow South Jersey Gas to attract the type of millennial employees it needs for today and tomorrow, the Gateway Project itself should bring growth to the city as a whole.

When complete, the 675,000-square-foot complex will include new academic and student housing buildings for the Atlantic City campus of Stockton University as well as 15,000 square feet of retail and an 879-space parking garage.

South Jersey Gas and Stockton University will combine to bring more than 500 jobs to the project, not to mention more than 500 college students who will be living in dorms.

The project, which runs along the city’s famed boardwalk, is the brainchild of Chris Paladino and AC Devco.

Paladino, the leader in public-private partnerships in the state, helped create a design that Atlantic City County Executive Dennis Levinson said he was eager to get behind.

“It was an easy sell to the freeholders, once they understood why we were doing this,” Levinson said. “We invested $127 million of county money and put the full faith and credit of the county behind this project.

“This will be a catalyst for this whole area down here. We already know that real estate prices are going up because of these projects.”

Ribbons said South Jersey Gas feels fortunate it got the chance to return to where the company was founded.

“Some 60 years ago, we started right here at Michigan and Atlantic avenues,” he said. “The main reason we’re here (today) is for growth.

“At South Jersey Gas, over the last few years, we’ve seen continued and consistent growth, which has had a direct impact on our workforce. With a growing and changing workforce, we simply outgrew our facilities in Folsom. Our workforce is currently scattered throughout our territories. We needed new space, not only to address our current needs but to accommodate our growth in the future.

“Atlantic City was a perfect match.”

“We wanted to be part of the excitement here,” he said. “Today, we know more than ever that Atlantic City is the place to be.

“Creative partnerships, like the one we enjoy right here at the Atlantic City Gateway Project, create the energy needed to help start rebirth here in Atlantic City.”

“More than a decade ago, Atlantic City lost its monopoly on gaming, but we could never get behind the vision of what Atlantic City should be,” he said. “This is clearly the start of the new Atlantic City. Beyond gaming, with corporate offices, continuing education at this end of the boardwalk and the new Hard Rock and the new Boraie housing project at the other end.

“Atlantic City is finally going to be the great city it should be, and a place where you not only want to work, but you want to live.”

Next up for Gateway is the opening of Stockton’s campus, which is scheduled to take place next summer, with students arriving in the fall.

Construction of the South Jersey Gas headquarters is scheduled to be complete at the end of 2018.