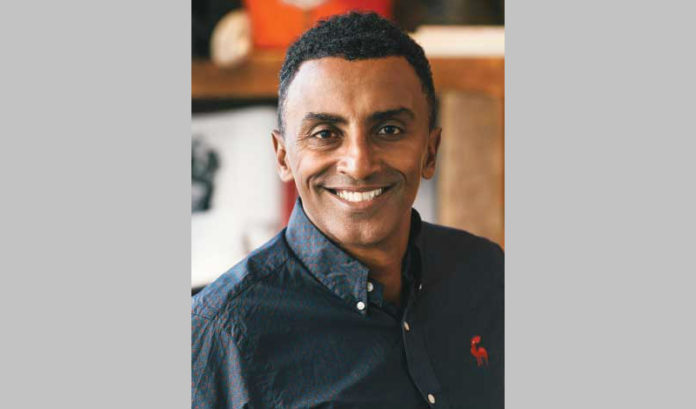 You may have seen him on Bravo’s “Top Chef Masters” or Food Network’s “Chopped.”

Perhaps you’ve used one of his seven cookbooks in the kitchen.

Or maybe you dined at one of his 15 restaurant brands in more than 32 global locations.

Now, Marcus Samuelsson, celebrity chef, restaurateur — and winner of five James Beard Awards, including Best Chef in New York City — is crossing the river to New Jersey to open his first location in the state.

Marcus B&P, a 60-seat neighborhood eatery in the Hahne & Co. building at 56 Halsey St. in Newark, will open for both lunch and dinner Monday.

Samuelsson said Newark’s rich history and diversity have lent themselves to the right kind of culture for his restaurant.

“It’s all about being part of the local fabric,” he added.

Samuelsson, 46, was born in Ethiopia and raised in Sweden by adopted parents, where he said his grandmother, Helga, instilled within him an appreciation for and knowledge of local, homemade food.

He followed that passion by studying at the Culinary Institute in Gothenburg, Sweden, and apprenticing in restaurants in Switzerland and France before heading to America to work at Aquavit in New York City.

Samuelsson then worked his way up through the kitchen to become the youngest executive chef at the time to earn a three-star rating from the New York Times, in 1995.

By 2009, he was cooking President Barack Obama’s first state dinner and planning to open his first restaurant, Red Rooster Harlem, to showcase his expertise in Southern soul food with hints of his Swedish and African roots.

Today, the Marcus Samuelsson Group consists of more than 15 restaurant brands throughout the U.S., London, Scandinavia and Bermuda, including a modern speakeasy reminiscent of the Harlem Renaissance; street food inspired by Harlem Americana; a Mexican social taqueria; and a classic burger joint with cleaner ingredients.

His restaurants can be found in notable locations such as Lincoln Center in New York City, the National Harbor in Washington, D.C. — and, now, inside 2,250 square feet on the ground level of the Hahne & Co. building in Newark’s central business district.

Samuelsson partnered with Ron Moelis of L+M Development for the venture after the two became business partners at his acclaimed eatery, Red Rooster Harlem, in 2013.

“For four years, it was Ron who really was the one telling me to come to Newark,” Samuelsson said. “So, I came here and started to learn and read about the area.”

Newark seemed serendipitously familiar to him, he said.

“I come from a town in Sweden where blue-collar workers and small business owners always are working together,” Samuelsson said. “There is a certain type of cuisine, music and culture that comes from that.

“That is what I am drawn to. Harlem has it. Newark does, too.”

Samuelsson said Newark has invited him and his restaurant into the city with the warmest of welcomes.

“You always are met with challenges when you take on a new endeavor, but what I am met with more so than that is how kind and excited people have been for my team and I to come here,” he said. “Whether it’s the guys making local honey or AeroFarms, people have just been so excited to work with us.”

Not only will Marcus B&P feature and utilize ingredients from local purveyors, but Samuelsson said he always had intended to hire locally for his 40-person staff.

“Today, nearly 80 percent of our staff is from Newark, which I think is important,” he said. “People have been knocking on our doors the entire time we’ve been working here. That’s excitement. We needed to match that energy, without taking it for granted.

“Now, it’s up to us to execute by interpreting that local pride to create something delicious.”

Marcus B&P takes inspiration from the Swedish concept of a “back pocket,” or an accessible, approachable spot, serving American and Mediterranean classics using locally sourced ingredients.

“This is a lot of new food for us,” Samuelsson said. “We’ve been inspired by the Portuguese-American community here, and our chef, Leo, is Italian-American — but, also, I mean, with something like Taylor ham, we thought, how can we translate that Jersey pride into something different? Well, we put it on a pizza.

“The surrounding communities here truly have inspired us to create an exciting menu.”

Marcus B&P will serve brick-oven pizzas — including the Nine Seventy-3 Pizza with Taylor ham, provolone, and Goffle Road Farm egg — as well as signature dishes, such as Samuelsson’s Fried Chicken and Waffles with Tassot Apiaries honey and a plantain waffle.

“When you come in, you can buy a Piri Piri sauce from the Ironbound,” Samuelsson said. “That is not ours. That is simply something we want to acknowledge within the local community.

“We also will highlight the local purveyors from which we purchase, so they can get more recognition.”

“Through the bar, the provisions and the restaurant, you can have vastly different experiences,” Samuelsson said. “That’s important, because one person might be on the go, while their friend wants to have drinks and another is waiting for a business meeting.”

The price point, therefore, ranges from $5 for cornbread to a shared dinner for two at $55.

“It’s important for people to come and have memories here with their friends and family,” Samuelsson said. “We want to make sure that it always is an affordable endeavor, so they can come back several times.”

Samuelsson hopes Marcus B&P will encourage those who work in Newark to take more advantage of the city’s night life.

“I have stood many times in the Ironbound looking downtown, wondering, ‘Where did all the people go? At lunchtime, it was packed,’” he said. “So, I said, ‘Let’s give them a great restaurant to come to after work.’ Restaurants are a great way to retain people. When the 9 to 5 retail closes, we want to stay open.

“We want to say, ‘Hey, before you go anywhere, wait a bit, stay here and enjoy.’ Whether you live in Jersey City or Maplewood or Montclair, we’d love to have you, because, obviously, this is an exciting place to be.”

Philanthropy and other projects

In addition to co-founding the Harlem EatUp festival in Morningside Park, New York — now in its fourth year — Marcus Samuelsson, celebrity chef, restaurateur and author, keeps busy outside of the kitchen by dedicating his time and resources to various nonprofits.

For example, Samuelsson and his wife, Maya Gate Haile, started Three Goats Organization in New York City in 2012 to improve the health and well-being of children and families in Ethiopia by helping to provide sustainable access to food and water.

Samuelsson also has been the board co-chair of the Careers through Culinary Arts Program in New York City since 2015, helping to educate and guide more than 17,500 underserved high school students per year through culinary training and awarding more than $53 million in scholarships.