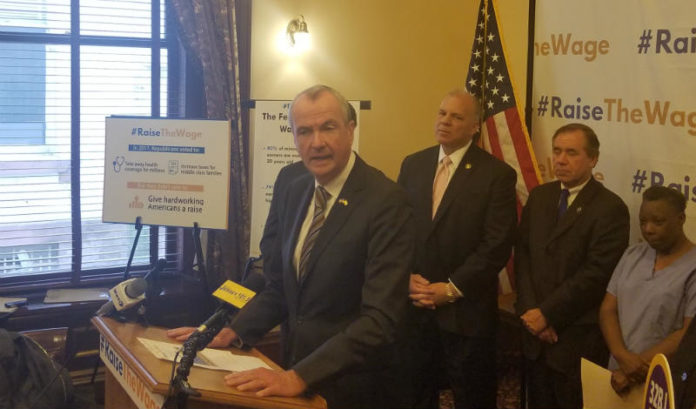 Elected officials gathered Monday at the State House to push for an increase in New Jersey’s minimum wage to $15 — a move that has previously been vetoed by Gov. Chris Christie.

“You earn either minimum wage, you are living in poverty,” Norcross said, adding that the last vote to raise the wage was a decade ago, giving businesses a free pass over the years.

Murphy said no specific strategy has been decided, but one plan supported by the delegation Monday involves an annual $1.15 hike until the $15 wage is reached — a far less ambitious plan than previous bills in the state.

Coughlin said the plan was one that wouldn’t “shock the economy.”

More than two dozen states have already approved a minimum wage raise, and a dozen more plan to, he said.

As in other states that have implemented the raise, the biggest concern in the business community is that it would result in employers deciding to cut jobs or cut hours or benefits for workers.

This would negatively impact the state, which ranks 33rd out of 50 states for job growth, according to U.S. News & World Report.

Laurie Ehlbeck, New Jersey state director of the National Federation of Independent Business, said the argument that raising the minimum wage would reduce poverty is false.

“The minimum wage was never intended to feed entire families or act as an engine to drive the economy. It was designed as a training wage for lower-skilled, less-experienced workers,” Ehleck said. “Unfortunately, the new administration has not sought the council of the small business community when determining policy. If they had, they would know that increasing the minimum wage rate this drastically will decimate small employers by forcing them to compensate for the increase in labor costs. The reality is that, by demanding that they pay their entry-level employees at such a high rate, small business owners will be forced to cut minimum wage jobs and raise prices on their goods.”

The head of another business trade group agreed.

“Most of our member companies tell us they will raise prices, reduce employee hours and increase automation to counter the impact of such a dramatic wage increase,” Michele Siekerka, CEO and president of the New Jersey Business & Industry Assocation, said in a statement. “We have heard members from the home health care industry question their survival if mandated to pay such a rate at the same time Medicare/Medicaid reimbursement rates are set at the same $15 rate. Fast-food franchisees have explained they’ll automate rather pay someone to take orders. Gas station retailers, who are not legally allowed to automate the pump, will have no choice but to raise their prices. Nonprofits that already struggle to deliver community services will be hard pressed to keep pace at the increased hourly wage.”

She added she looked forward to working with the group on the legislation.

Sweeney said some retail companies have voluntarily raised wages, not out of the goodness of their heart, but because they see their own employees unable to purchase items in their stores.

Norcross said the best economic stimulus package the country could pass is raising the minimum wage.

California, which has implemented a gradual increase until 2023, allows for one-year pauses in case of poor economic conditions.

A University of California-Berkeley study that was released earlier this year evaluated the effect of the increase on California, with a focus on the poorest area — Fresno.

“A higher minimum wage induces some automation, as well as increased worker productivity and slightly higher prices; these are the negative effects,” the study said. “A minimum wage increase simultaneously reduces employee turnover, which reduces employers’ costs, and it increases worker purchasing power, which stimulates consumer demand. These are the positive effects.”

In his comments Monday, Murphy echoed the positive effects found in the report.

Overall, the officials offered no specifics, saying they would be spending the next few months brainstorming.