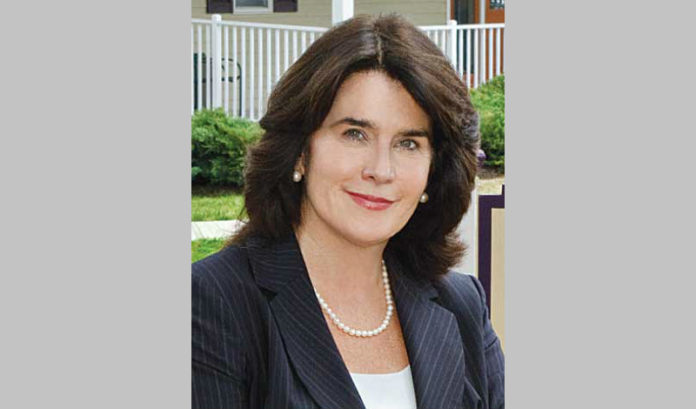 Peg Wright of The Center for Great Expectations shouldn’t be left out of any conversation about the state’s big employers.

Although her business is in the nonprofit space, she has about 100 full- and part-time employees under her. That’s not insignificant; neither is the work they do.

“Their job is to change the trajectory of peoples’ lives,” Wright said.

Wright founded The Center for Great Expectations to help young women — some pregnant, homeless and addicted to drugs — who have suffered a cycle of abuse and neglect.

The program has changed a lot since its founding in 1998, then a program that served just six at-risk teens in a small rented house in Somerville. The emphasis on abuse and neglect and the link between those childhood traumas and later problems was something the nonprofit picked up along the way.

Wright’s organization now offers outpatient care and supportive housing to women and teens with addictions and mental health problems, as well as the children they’re raising. Care is provided by certified clinicians, who approach substance abuse as being a maladaptive response to trauma.

At the heart of this are issues that have attracted national attention, such as the opioid epidemic. And, with Wright’s organization having expanded so greatly over the years, it’s becoming a model for generational change that’s meant to prevent the children of today from becoming tomorrow’s addicts.

“It’s about recognizing what is safety and what love looks like,” she said. “That’s what will change the landscape of drug abuse, not just limiting opioid prescriptions. People don’t use it just because it’s overprescribed. They do it because they’re in pain mentally.”

The kicker is that not everyone agrees with this.

Wright, who is not one to shy away from expressing her opinion, is well aware that she’s up against a history of different approaches to substance abuse prevention — often punitive or simply entrenched in tagline-driven notions from the past.

“‘Just say no’ is not prevention,” she said. “Assisting a woman who has been abused nine ways to Sunday by helping them recognize how to attach to an infant and provide a safe place — that’s what will be a big factor in preventing that child from needing to use substances later.”

The particular approach taken by The Center for Great Expectations makes it a standout nationally, and certainly one-of-a-kind in the Garden State.

“Gov. Chris Christie was pretty all-in on the treatment end of things,” she said. “He came here all the time.”

Whether that translated into a significant local infusion of actual support — or a shift in thinking about trauma-informed care at state-run programs the way Wright hoped to see — is another question.

Now, Wright has to reckon with a leadership changeover in Trenton and whatever prospects that may bring.

Wright decries a current disconnect between policy regarding substance abuse prevention and findings in research, which she said regularly reflects an increased likelihood that children who suffer trauma will go on to use intravenous drugs later in life.

“There’s a critical paradigm shift that needs to happen if we want to make an impact,” she said. “We want to lead that. But, ultimately, it’s all about money.”

By any estimation, her nonprofit doesn’t have a small budget. It’s at $6 million.

But it’s costly to have licensed clinicians who have experience with substance abuse backgrounds facilitating interventions. And, there’s a capacity issue the organization is running into.

“It’s something you have to pay for,” she said. “You can’t put 40 new people in a group and just expect them to get well.”

Wright said The Center for Great Expectations is in desperate need of more beds and an expansion of its residential facilities.

The supportive housing is an essential part in the treatment of those with substance abuse, who overlap at a high rate with the homeless population. It can play a role in putting them on a path to returning to the workforce.

“These women often aren’t close to that, but this treatment is a critical piece in the landscape of a healthy society,” she said. “It’s important to get them to a point where it’s conceivable they could work, instead of having them cost taxpayers lots of money in the criminal justice system.”

Considering how severe the traumas inflicted on some of the young women in the program might have been, including years of rape and physical abuse, Wright relayed heartening stories about the potential to begin turning one’s life around.

“We had one person who had been raising eight siblings almost by herself since she was only 10 years old, and then she got pregnant at 15,” Wright said. “She had her son and stayed several years at our facilities. And now she’s in supportive housing and going to community college.”

The Center for Great Expectations will continue taking a long-term view that aims to not only turn around an individual’s life, but that of their offspring, too.

“Substance abuse is a life-threatening illness that we need prevention for, because people are dying like crazy,” she said. “We need to have places that treat this as a continuum, the same way we treat diabetes and heart disease.”

The Center for Great Expectations

Medical professionals in N.J. have been shielded from COVID-related malpractice liability,...