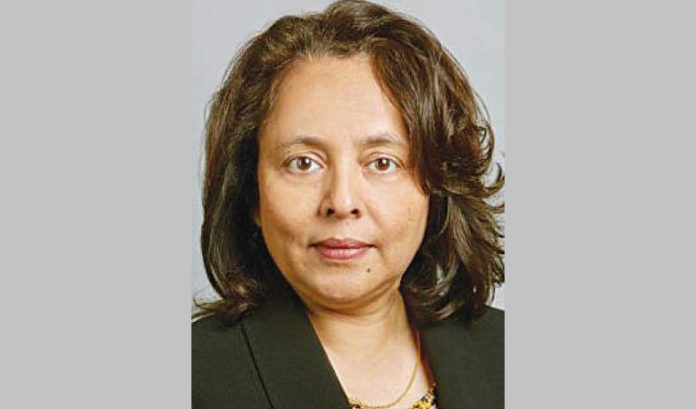 Quid pro quo in the financial circles that Varsha Waishampayan spent most of her career in wasn’t hard to figure out.

But getting business leaders to voluntarily commit 10 months of their time to mentoring people on behalf of her nascent nonprofit’s mission … That was a different story.

“Working with volunteers — coming from the world of Wall Street — it’s just a different ballgame,” she said. “We’ve had to do a lot of thinking about how best to find volunteers and motivate them to continue to their offer time and talent. It has involved a lot of learning.”

It’s one of the stumbling blocks Waishampayan ran into after she became CEO and one of the founders of WINGS for Growth almost a year ago, which followed nearly three decades of working in management roles for top profiteers, such as Goldman Sachs.

Still, the stark contrast between the nonprofit world and investment banks hasn’t held her back.

“All of us here (at WINGS) come from business background, which actually means we come to this nonprofit with a certain perspective that gives us an advantage in many areas, even if we’ve also had some surprises,” she said.

The nonprofit, an acronym for Women’s Initiative to Nurture Growth and Success, was founded by Waishampayan and Mathangi Srinivas, who also spent more than two decades working in the financial sector and other industries.

These women created a platform that mentors other career-driven women across many industries. They worked in concert with other professionals willing to volunteer to fill a local programming gap that existed for younger generations of women.

“We didn’t see many resources for all of these women who were talented and driven, but feeling stuck, to be able to accelerate their careers and develop talent — not only internally, but also externally, outside of their internal corporate culture,” she said. “So, we wanted to be able to attract senior people who would associate with us and volunteer to mentor these women.”

Waishampayan believed that a personalized approach to these mentorships, using an outcomes-based methodology, would make the nonprofit unlike any other in the state. The mentorships were structured a way that had mentees and mentors pairing up to meet for several hours at a time over the course of 10 months.

Given that everyone involved is unpaid, the incentives are not as crystal-clear as what Waishampayan long dealt with in the business world.

“We really had to go in and sell volunteers on this,” she said. “And for them to agree to regularly dedicate five to six hours of their time to this mentee — it’s a huge ask.”

After about eight months of mentoring the nonprofit’s first cohort of women, Waishampayan admitted that she has been encountering something of a revolving door situation with volunteers.

“But, we think we now have the right mechanisms to keep volunteers motivated,” she said. “And, ultimately, the leaders are all doing this because they have something to give. They feel good when the mentee is showing progress, and we have a way to measure that progress for them, so they know it’s time well spent.”

Thinking like the savvy businesswoman she is, Waishampayan started orienting her nonprofit’s outreach to potential mentors toward an emphasis on the opportunity it could be for them.

“If someone wants to help with marketing, they might not be an expert on it, but may bring some other strength of expertise,” she said. “But if they have something they want to learn, they can pair with people that allow them to do that. So, they’re getting something out of it, too.”

Waishampayan and her WINGS team are keen on figuring it all out, because they all very much believe in the cause; that is, as she put it, “getting mentees the confidence and courage they deserve to accomplish what they want in business.”

To best set themselves up to continue that mission into 2018, the nonprofit is gearing up for fundraising after its proof-of-concept first year wraps up. WINGS is currently funded all through individual donations, and keeps its enrollment fees for mentees relatively low.

“But now that we have more credibility, securing funding will become easier,” she said. “I didn’t want to start applying left and right to various grants and corporate sponsorship programs until we had something good to say, until we had significant people associated with us.

“You can’t go ask for large check without them knowing who is going to benefit.”

Needless to say, Waishampayan is no longer on Wall Street.

“However, because I do come from that world, I see a lot of opportunities to partner with private equity firms, along with applying for public grants,” she said.

The challenges Waishampayan has faced in her entrance into the nonprofit sector have less bedeviled her than further inspired her. She radiates passion about promoting women in the workplace, and her aspirations are high as ever.

Even without being plugged into a larger national organization as some nonprofits are, Waishampayan still sees the future of her nonprofit as being an agent for change on the national stage.

She expects WINGS to develop into an institute that delivers widely regarded thought leaders. And she has a plan for it.

“It’s about getting influential women — and men as well — buying into our program,” she said. “It’s them who will allow us to connect further and make the impact we want to. That’s the end goal. Today, we’re focusing on the building blocks.”