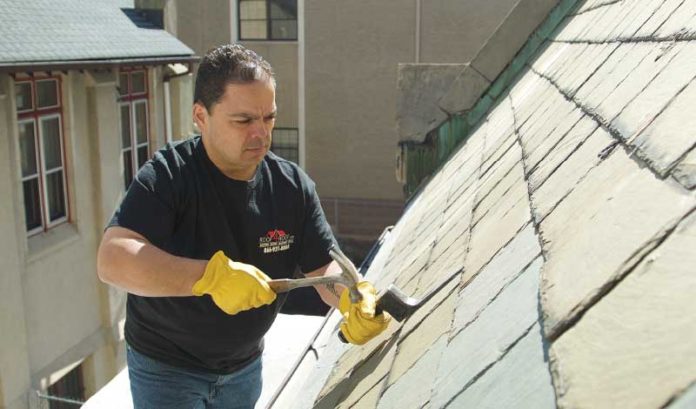 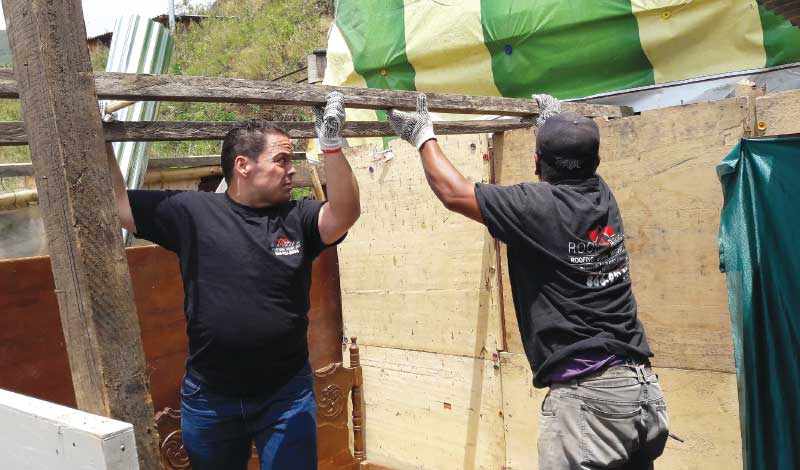 Hurricane Maria destroyed more than 70,000 homes after it made landfall in Puerto Rico on Sept. 20.

Residents have waited months to get federal assistance from the Federal Emergency Management Agency. Some, in fact, are still waiting today.

Chuck Anania wasn’t going to wait. He wanted to help. Just as he has so many other times following natural disasters around the world.

So, Anania, founder and president of Roof4Roof, a commercial and residential roofing and remodeling company in Carlstadt, raised more than $4,500 and donated $5,500 himself as part of his newly formed nonprofit Contractors4Change — and went to Puerto Rico earlier this month to be part of the rebuilding efforts.

For Anania, it’s the latest venture for Roof4Roof, what he calls a “for-profit, for-progress” company that has helped more than 800 needy families around the world with free roofing and other emergency home repairs.

Anania said it’s his way of combining social entrepreneurship with his commercial and residential roofing business, providing assistance following natural disasters and in places of poverty such as Colombia, the Philippines and Guatemala.

But not all of his assistance has been international. In addition to the families he has helped in foreign countries, he also has helped to repair or rebuild more than 22 roofs in New Jersey alone just this year.

“I made a conscious decision as a Christian and as a father to, quite frankly, make less of a profit,” he said.

After starting work in the roofing industry in the 1990s, Anania founded New Jersey Certified Roofing in 2004.

Philanthropy was part of the business model from the beginning, as he made a trip to Thailand that year to help victims of a devastating tsunami. The following year, he helped people in the South who had been hurt by Hurricane Katrina.

Then, prior to the birth of his daughter in 2007, he took his first trip to Colombia, where he was greatly affected by the level of poverty and the dilapidated structures he witnessed.

He felt he didn’t necessarily have to wait for a natural disaster to help people.

“We always had been involved in charitable work, like after Katrina, for example, and the tsunami in Thailand,” Anania said. “So, when I got back from my trip, I was thinking of a way to give back more consistently.

“I wanted to do more than just write a check.”

In 2010, he started Roof4Roof, donating free emergency roofing services to a family in need for each and every commercial or residential roof installed by a paying customer.

“Somewhere between 10 and 20 percent of our profits are set aside each year to help families in need, typically totaling about $100,000 per year,” Anania said.

On average, he said, roofing repairs and replacements can cost him anywhere from $500 to more than $5,000, depending on how much work is needed.

But Roof4Roof does not mark up its prices to make up the difference, Anania said.

“We have benefited somewhat because people like that we do charity work,” Anania said. “We get a lot of repeat clients and referrals in residential and commercial work from property management companies and developers.

“They like that they can trust the work we’ll do for them, and they like that their money is going further by not only getting a good product and service from us, but also helping someone in need.”

Roof4Roof consistently has been able to help nearly 100 families per year by partnering with other charitable organizations such as Habitat for Humanity and Catholic Charities USA.

Still, the nearly $5 million company with 15 employees and additional contractors is growing.

“We wanted to do more, so we incorporated Contractors4Change to encourage more people to contribute by getting tax write-offs for their donations and to get other contractors involved to do larger projects,” he said. “Maybe we could do something like an extreme makeover here locally, two to four projects a year, with electricians, plumbers, carpenters and other people outside of our specific expertise.”

Anania said his biggest challenge has never been finding new business or maintaining comfortable margins — it has been deciding who to help.

“We don’t have an unlimited budget, and we are a small organization compared to many other well-known charities, so it is always difficult deciding who to help and who must be put on a waiting list,” he said.

Those aren’t the only difficulties he encounters when trying to do good.

In Puerto Rico, Anania said, he found confusion about how FEMA aid would be distributed was an issue.

“Just about everyone we spoke to wanted to wait for FEMA,” Anania said. “Though FEMA said that they would not be disqualified from further help, residents were still paranoid.

“Everyone was afraid to have any work done.”

Instead, Anania and his team at Contractors4Change decided to purchase essentials such as food and water for 40 families.

With less than 50 percent of electricity restored and more than 1,500 residents still living in shelters, Anania said he hopes FEMA continues to focus its efforts on Puerto Rico.

“People are in decent spirits, but they are playing a waiting game,” he said. “It’s frustrating for someone like me who is used to making a difference.

“Yes, we helped 40 families with emergency expenses, and that, of course, is fantastic, but it is just not what we are used to.”

Chuck Anania, founder of Roof4Roof and Contractors4Change, said that, due to the challenge of expensive insurance rates in New Jersey, his organizations are typically able to accomplish more overseas.

“Our money is able to go further and help more families overseas because homes are smaller, labor is cheaper and we are able to temporarily employ workers,” he said.

For example, Anania and his team traveled to Colombia for the 15th time in September, to help repair and replace 30 roofs.

“We have a couple people there who know, two or three times a year, they will be on call and working for me for a few weeks at a time,” Anania said.

Roof4Roof also traveled to Guatemala in 2011 and has traveled to the Philippines three times since its first trip there in 2013.

“We also want to go to Kolkata, India, by next spring,” Anania said. “I have made a personal decision, inspired by Mother Teresa, that I want to volunteer there.”

Good to Great is an occasional feature in ROI-NJ, where we highlight New Jersey companies and individuals going above and beyond to help. The concept is based on this idea: Do good work, so you can do great things in the world. Have a story we should tell? Contact editor Tom Bergeron at tbergeron@roi.wxp.io.