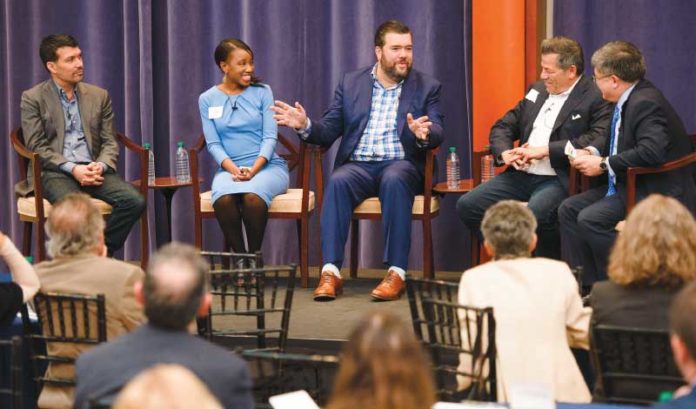 The most important aspect of leadership, Tara Dowdell said, is the ability to inspire and empower.

“People should follow you, not because they are afraid of you, but because they respect and admire you,” she said. “It is important to invest in talent and grow the people you work with in order to create strong companies, build loyalty and trust, and ensure that your clients are properly served.”

Dan Berkowitz, founder and CEO of CID Entertainment in Philadelphia; Paul Kermizian, co-founder and CEO of the Brooklyn-based Barcade, with locations in Newark and Jersey City; and Chris Lotito, owner, CEO and president of Lotito Foods in Edison, joined Dowdell on a recent panel of local chief executives who were recognized for having evolved into leaders in their respective industries.

Here’s what they had to say:

“My parents both taught here in the great city of Newark for nearly 35 years, and, as a child, every weekend, my mother would invite a student to our home to show them that if they worked hard and went to college, they, too, could have a good life. … One of the most formative things for me was when the parents of a young lady, who had just become homeless, asked my parents to take her in. She lived with us for a couple of months until her parents could get back on their feet. That is how I was raised.” — Dowdell

“When I was a little boy, my job was to get on the truck and push the cheese to the end of the truck so my father could make the delivery. That’s how I started. Then, when I was about 12 and my friends were all selling newspapers, I had an egg route. I’d buy the eggs loose, carton them up and sell them for twice what I paid. That’s how I became the kid on the block with all the money. ” — Lotito

On creating a culture:

“Government can be very toxic. There are wonderful people who work in government, but I also still have some wounds in my back from some of my colleagues. … I started my own firm because I wanted to have the freedom to fully create a culture and make an impact on my own terms. I wanted to build a company in which people could support each other because they felt valued and challenged to be their best selves. My business is very much about those values and working with clients who share those values.” — Dowdell

“I’d like to create a culture in which everyone is fulfilled at work, doing something that matters. I don’t try to inflate what we do, but there is something fulfilling about connecting people with the music that they love if we do a good job and we like the people that we work with. If there is no trust, or we are not treating each other kindly, no one is going to like coming to work. … It is very difficult to get to that place.” — Berkowitz

On customer service and marketing:

“One of the most challenging parts of my job and of this company is customer service. … If people are happy, they’re mostly silent about it. It’s good when people don’t have anything to complain about.” — Kermizian

“One of the things I am just ferocious about is attention to detail. I am very hands-on to make sure that everything that goes out the door is reflective of our brand and our quality. That requires a significant amount of time and attention from me, but is also why we’ve grown.  … I also have a policy that, if we do happen to drop the ball, and we don’t get to something, we don’t try to make excuses. We instead offer a solution and try to make it up to our clients.” — Dowdell

“If we are not doing a good job, you better believe that we will hear it from our guests, our partners, our vendors and, lastly, our staff, because no one will enjoy coming to work.” — Berkowitz

On the challenges of being a business owner:

“Client services is the fun part. Administrative responsibilities and managing business operations is, 100 percent, the most challenging part of my job and, as a business owner, the thing I can least control. I can’t control what the utility company does, or what the telephone company does.” — Dowdell

“When you are dealing with food, it is all quality control. You are always worrying that your products are not only of great quality, but also safe for your consumers. Since we deal with a lot of perishables, that runs through my mind all of the time.” — Lotito

On what it means to expand the business:

“I’m still figuring out how to transition from being the owner of a single bar to now having multiple locations and operations. … I like to try to make time to get out and visit each of our locations, because it is very easy to lose sight of what is happening on the ground. And, yes, sometimes you can still find me working in the control panel of an arcade game making repairs. But, we have hired people to do the work that I used to do. … As a small business owner with one location, I was working behind the bar, I was paying the bills, I was accepting deliveries — I don’t do any of that anymore. It can be hard work to let go. … But, we have grown by putting people in management positions, in positions of responsibility, that has given them the ability and authority to make decisions.” — Kermizian

“I went from designing, operating and executing programs all on my own to then running an organization that does that. Those are two totally different jobs. We are now a 75-person company and I am not at a vast majority of our events. We are nothing without the people who work at CID Entertainment.” — Berkowitz

“I’ve learned the hard way the art of saying no. We cannot do it all, so we cannot take everyone who comes to us, even if they fit our model, even if they are socially conscious and even if they are making a wonderful impact. Managing growth is really important to me because, as someone in public relations and marketing, I have an acute understanding of how easy it is to ruin or harm one’s reputation.” — Dowdell

“When I was younger, I was focused maybe 70 percent on the present and 30 percent on the future. Now, it’s reversed. I still keep my eye on what’s going on every day, but we have grown to a point where the good people I have working for me can handle the daily functions and I can be more creative and focused on the expansion of our business.” — Lotito

“We look for two things: the ability to do and exceed in the job, and someone who will fit well within our culture by working hard, caring about their job and being nice to the people they work with. We hire slowly and carefully, by giving candidates the time to meet with our team members, because I don’t want the most talented jerk in the world. That will just unravel the organization. So, we pay close attention to making sure that person will work well with us.” — Berkowitz

“I think it is important that my team play a role in who gets hired, because they are going to be working with this person just as much as I do, if not more. I also look for a certain level of obsessiveness, which sometimes may be viewed as a negative, but everyone who works for me wants to pursue excellence, not because I ask them to, but because it is who they are. .” — Dowdell

“Common sense and dedication to hard work are two things we cannot teach, but we also may not find that out about a person until they are actually in the position. So, we do a lot of promoting within.” — Kermizian

On turning one’s passion into a career:

“The ultimate goal of pursuing your passion as your life’s work should not be financial success. If you can truly put a monetary value on the work that you are doing, there is no other means of fulfillment. … So, my advice is to simply get any job in the field that you love and be amazing at it 100 percent of the time. Whether that’s cleaning arcade games or loading cheese onto the back of a truck, be amazing at it. Don’t be good some days, and great others — be amazing 100 percent of the time, and someone will notice. It may not happen within your first week or month, but, within a year or two, someone will notice — and that is when opportunities will arise. You will then grow within the organization where you are, or you will grow out of that organization into something better.” — Berkowitz

“When you work overseas in developing countries, you really see the impact of what you are doing so quickly and viscerally. For example, we built the website for the East African Training Initiative, a great two-year fellowship training program and partnership between Brown University and Columbia University focused on training pulmonologists and critical care doctors for Addis Ababa’s Tikur Anbessa Hospital in Ethiopia. Prior to, there only was one pulmonologist in all of Ethiopia, the third-most populous country in Africa. So, we’ve been doing branding and identity work for them at a discount due to the nature of their work.” — Dowdell

“It would be almost irresponsible of me to advise people to do what I did. I left a steady, well-paid job as a production manager for The History Channel to open Barcade and maxed out all of my credit cards. … But, we had confidence that we were doing something different, something that we loved and, since we were combining our interests and passions for arcade games and craft beer, that passion would ultimately come through.” — Kermizian

After graduating from Rutgers University in 2002, Dan Berkowitz began working in the music business by handing out flyers for his favorite bands and venues. Within two years, Berkowitz become tour manager for The Disco Biscuits and a production assistant for Electric Factory Concerts. In 2007, Berkowitz founded his own live music events company, originally called Consider it Dan, creating VIP packages for bands and festivals. He grew this organization from a single-person operation to the 75-person staff it is today at CID Entertainment.

In 2002, at 25, Tara Dowdell was the youngest person and the first African-American to serve as the director of appointments in then-Gov. Jim McGreevey’s administration. One year later, she accepted the position as senior manager of government and community relations for the international shipping arm of the Port Authority of New York and New Jersey. In 2006, Dowdell founded her own socially conscious marketing and public relations firm. Dowdell is now a regular commentator on MSNBC and Fox 5 New York News.

After directing the documentary “American Beer,” a 2002 profile of the emerging craft beer industry in America, and working as a production manager for The History Channel, Paul Kermizian joined four of his friends in the pursuit of steadier income while searching for other creative freelance gigs. The team opened the first location of Barcade, a combination bar and arcade, in Williamsburg, Brooklyn, in 2004. When Kermizian took on the role of CEO in 2011, he began expanding the brand to seven locations infour states.

N.J. to announce $665M investment in medical research at the Hub — and that it’s moving a medical school to site