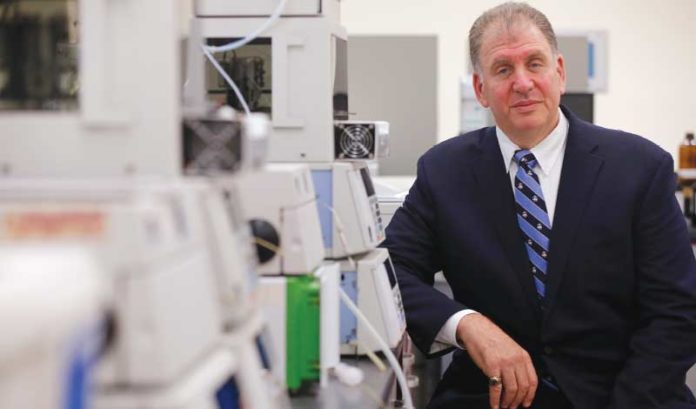 Craig Weiss said he could not think of a better location than Fairfield for his $16 million family-owned and independently operated testing laboratory.

“There are a tremendous number of pharmaceutical and cosmetics companies here in New Jersey and nearby in New York City,” he said. “Location is certainly our No. 1 advantage.

“The state’s diversity, especially when it comes to bringing in panelists for studies, is another. And the available pool of talent is much better than, say, somewhere out in the Midwest or in the South.”

Weiss has been co-CEO and president of Consumer Product Testing Co., or CPTC, since 1999, when he and his brother, co-CEO Lon Weiss, took over the company from his father, Mel Weiss.

Last year, however, he made the move to put down permanent roots.

Working with the New Jersey Economic Development Authority, CPTC bought the building the company has been leasing for more than 20 years.

The acquisition, Craig Weiss said, made an impact.

“Since acquiring the building nearly one year ago, our business has increased 11 percent,” he said.

“There is a lot of oversight, because it is a family business and, therefore, the people that you work with all have a vested interest to do whatever it takes,” he said.

Regulated by the U.S. Food and Drug Administration, the Environmental Protection Agency and the Drug Enforcement Agency, CPTC routinely uses chemistry, photobiology, microbiology and advice from various medical professionals to test products at various stages for their clinical safety, efficacy, sterility and toxicology.

“We have so many different divisions that we are set up with quality in mind,” Weiss said.

“There are lots of competitors who work with pharmaceuticals here in New Jersey, but only a few who focus on specialty chemicals and medical devices,” Weiss said. “There are also only two who work with cosmetics.”

CPTC employs nearly 128 and reimburses volunteers for time and travel when conducting studies and focus groups.

However, it is the ever-changing regulations — not necessarily the thorough scientific testing or the constant hiring of panelists — that present the real challenges for CPTC, Weiss said.

“There are several bills in Congress right now that are currently looking to further regulate testing, especially for cosmetics,” Weiss said. “It’s really about keeping on top of the ever-changing regulatory market for different industries.”

CPTC stays ahead of the competition this way, Weiss added.

“Since we run under extremely high-quality standards, even if things are further regulated and we are open to further inspection, we know that our reports and our data will be acceptable,” he said. “We try to stay ahead of the curve.

“We also are looking to continue diversifying our base by moving into additional industries, such as testing within the food and beverage market.”

“We’re looking to expand into some off-site clinical facilities to create more studies,” he said. “I’d like to say we could expand tomorrow because, we could really use the sites at this point, but we are probably about a year or so out from expanding.

“So, as of right now, we are really open to which locations we expand to first. But the first will absolutely still be in New Jersey.”

Help from the EDA

Consumer Products Testing Co., or CPTC, was able to purchase the 44,000-square-foot facility at 70 Dutch Lane in Fairfield it had been leasing for 20 years through the New Jersey Economic Development Authority’s Premier Lender Program.

Melissa Orsen, CEO of the EDA, visited CPTC in October as part of the EDA’s ongoing efforts to facilitate awareness of the programs it offers to support small and midsized business and not-for-profits in the state.

“Today’s visit enabled me to see firsthand how CPTC has leveraged funding through state programs to thrive here in New Jersey and contribute to the Garden State’s workforce,” Orsen said.

Bank of America provided CPTC with a $4.1 million loan — which included 44 percent participation by the NJEDA — and a line of credit to purchase equipment.

The Premier Lender Program lowers the cost of borrowing for small businesses through the EDA’s partnership with more than two dozen banking partners. By participating in or guaranteeing a portion of a loan, EDA reduces the lender’s risk.