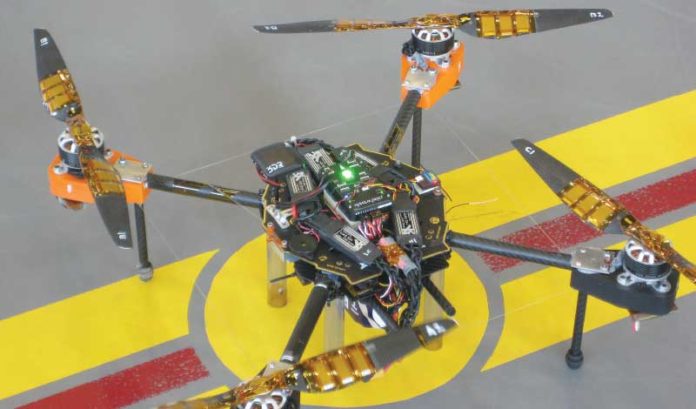 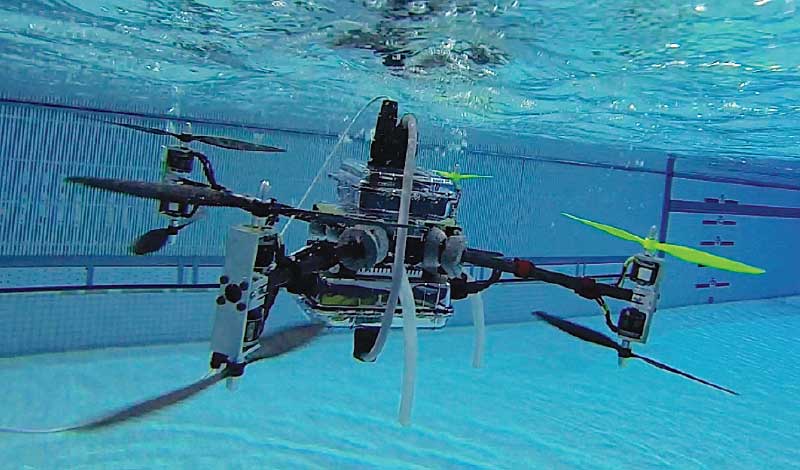 Rutgers developed an amphibious drone, which could inspect sites by air or underwater. – Rutgers University

The future is here; the potential for commercial application of drones and aerospace technology is high; and the need for skilled engineers to put this innovation to use is huge.

None of that goes over the heads of educators.

That’s why Rutgers University started a process to become New Jersey’s first public university to offer an aerospace degree — an effort that culminates with the first students of this program graduating in May.

The school’s more than a century-old Department of Mechanical Engineering, which has since added aerospace to its name, long offered an aerospace certificate, but no degree dedicated to the field.

“It gives the state new avenues for high school students to stay here to do what they love,” Alberto Cuitiño, department chair and professor, said. He added that it was driven by increasing interest from students, and, importantly, increased demand for engineers with knowledge of drones and other aviation technologies.

At the same time it began the process of adding this specialized degree, Rutgers started positioning itself as a leader in the testing and development of unmanned aerial vehicles, or drones. The study of these futuristic aircraft designs is a standout feature of the university’s new program.

“It’s becoming one of the main areas of activity that we expect to grow in the next few years,” Cuitiño said. “We are starting to see a shift in the paradigm as far as how things will be done utilizing drones. As of right now, it’s already clear that there are several areas it will affect.”

A lot has been written about the technology’s potential for use by mega-corporations such as Amazon, and the way delivery drones may become an ordinary visitor to everyone’s doorstep.

But Cuitiño said Rutgers, in its new drone focus, is testing some lesser-known applications of these vehicles, such as pest control in the agricultural sector, assisting in surveys for the construction industry or even mine-sweeping for the military.

All of these uses of drones will require new designs, new materials and new talent.

Cuitiño said that’s on the university’s radar. Accordingly, the educational institution has become one of six national FAA sites where experimental drone designs can be flown and tested before the aircraft are integrated into the everyday. It’s in the process of creating a lab dedicated to this new function, but there is already work underway at the institution.

Two years ago, the U.S. Navy’s research and development arm awarded Rutgers University a grant to develop a drone that’s equally adept at flying through the air and sea. This amphibious drone could have many purposes, such as monitoring oil spills or mapping underwater mines.

“With a drone that could move between air and water seamlessly, you could also do important assessment work on the structural components of a bridge,” he said. “You could inspect it above water and then go its lower, underwater structure. That would be very important to resolving issues with stability.”

Rutgers is also involved in testing agricultural applications of drones. Models of these vehicles are proving highly capable of taking surveys of fields and collecting data that can be used to improve crop yields, decrease water usage and make the application of pesticides more efficient for the modern farmer.

One more area that Rutgers drone innovation is being targeted to is mosquito control, adding another chapter to the institution’s history of innovating in the curbing of mosquito populations. It’s credited for developing the world’s first aerial mosquito control system in the ’30s.

Today, emerging drone technology is being tested for its potential to make aerial mosquito control more precise. Rutgers has constructed experimental, heavy-lifting drones that have equipment such as GPS to accomplish that.

All of these multipurposed drones are piloted under the scrutiny of the university and FAA’s many rules for operating any form of aircraft. While the study of drone design is becoming more integral to a Rutgers engineering education, the piloting itself isn’t part of the curriculum.

“It’s something other schools are looking into,” he said. “Many community colleges are getting involved by adding in training for pilots. I don’t expect we’ll do that here, but things may change.”

No academic niche will go uncharted as unmanned aircraft proliferate.

“With this technology, there’s a new need for talented people in all areas, which will all be driven by commercial application, but will involve education, too,” he said. “Just as you need the engineering, you have another group of people developing software as well as those making sure it’s done in a safe way, requiring skillsets in law, privacy and regulation.”

For Rutgers, Cuitiño said drones are becoming institutionalized for good reason: companies with a local presence — such as Lockheed Martin in Moorestown or Boeing in Philadelphia — need skilled engineers with expertise in this and other aerospace-related areas.

“The idea of workforce development, that’s our main business,” Cuitiño said. “And in that respect, this is all exciting news.”

Atlantic County officials are making a big bet on education — specifically, teaching the next generation of much-needed aviation industry workers — as a panacea for problems a decline in the gambling sector brought to the region.

The South Jersey county partnered this year with Atlantic Cape Community College to start developing training programs for aviation maintenance, repair and overhaul technicians. The new academy, which will be established next year, will prepare students for FAA certification and lead into a variety of complementary four-year programs.

“What we realized when we had downturn in casino industry is that we were extremely over-reliant on one industry that was no longer a growth industry,” he said.

As the industry bottomed out, workers who didn’t have an educational background to call
on suffered.

“The overwhelming majority of casino jobs, all but maybe 10 percent, did not require education and training so they didn’t have skills that were transferable for other good-paying jobs,” he said.

Kyle said the county has heard interest from several airlines in developing the county’s existing airport, Atlantic City International Airport, into an aircraft maintenance center. The airport, which is outfitted with notably large runway space, would fit such a center perfectly, Kyle said.

Aside from the potential for local job creation, a recent forecast from Boeing anticipates the need for more than 609,000 maintenance technicians around the country during the next 17 years.

And, unlike the casino industry, the skillset required of these jobs don’t just apply to airline labor — it could also apply to as working on wind turbines or engine repair for cruise ships, Kyle said.

“That there’s a need for these skills is something we definitely recognize,” he said.