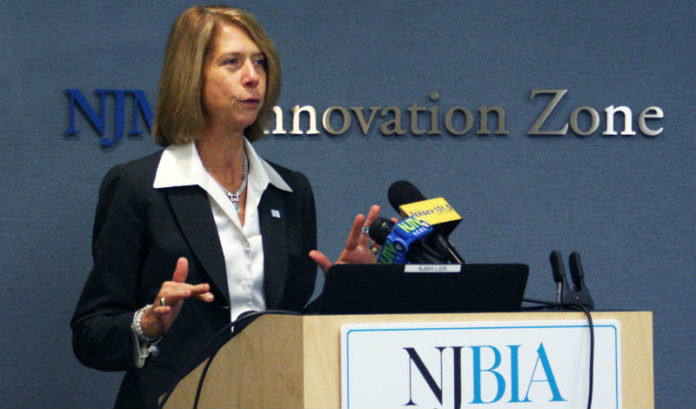 The bad news? That hasn’t yet stopped millennials and retirees alike from leaving the state.

Michele Siekerka, CEO and president of the New Jersey Business & Industry Association, spelled out on Monday such “tailwinds” and “headwinds” regarding the state’s near-future economic climate, as presented in the organization’s 59th annual Business Outlook Survey, based on more than 1,000 responses from NJBIA member companies in September and October.

“Businesses overall are continuing to see steady economic growth,” Siekerka said. “Yet, we are seeing guarded optimism as to whether these trends will continue in 2018. That sense of caution is resulting from the uncertainty about policy changes that a new governor and administration generally tends to bring.

“And, of course, the high cost of living and the tax burden continue to disadvantage New Jersey businesses in comparison to their out-of-state peers and other companies that our residents run in other states.”

Taxes and fees are regarded as worse in New Jersey by 83 percent, while controlling government spending (71 percent), health care costs (61 percent), cost of regulatory compliance (55 percent), attracting new business (53 percent) and labor costs (51 percent) are also regarded as weak areas for the state by at least half of the members surveyed.

Nearly 30 percent of those surveyed cited health insurance as their top economic concern, with 78 percent expecting health care costs to rise next year and 56 percent stating that they have been negatively impacted by the Affordable Care Act.

Nearly 25 percent of those surveyed ranked property taxes as their top economic concern, with 65 percent regarding it among their Top 4 concerns.

Lastly, 18 percent of those surveyed cited the overall cost of doing business as their top economic concern, with 68 percent regarding it among their Top 4 concerns. As many as one-third of member companies said they even postponed expanding or innovating due to excessive and often delayed regulation.

With only 24 percent of member companies stating that they felt New Jersey had made progress in easing these concerns over the last year, it is not surprising that only 14 percent of those surveyed said they would plan to open another location in New Jersey. Of the 43 percent of companies with expansion plans, 29 percent said they would be expanding into another state.

“So, when we consider policies in the state of New Jersey that raise taxes, raise the cost of doing business and raise the impact on our residents and our businesses, every one of those policies must be put through the lens of affordability and regional competitiveness with our No. 1 and our No. 2 outmigration states, New York and Pennsylvania.”

Siekerka cited the elimination of the estate tax by January 2018 and significantly raising the retirement income tax threshold as examples of policies that would retain more businesses and retirees in the state.

“This year, more people said that they are contemplating staying in the state of New Jersey into their retirement,” she said.

While those numbers rang in at just 40 percent, Siekerka highlighted the sudden increase over last year’s numbers, when only 32 percent of those surveyed said they would retire in-state.

“We said that comprehensive tax reform would be a game changer in the state of New Jersey, and it is starting to move that needle,” Siekerka said.

Of additional focus at NJBIA this year, Siekerka said, was the outmigration of those between the ages of 18 and 34 years old.

“We are the No. 1 net outmigration state of millennials in this country,” she said. “When we talk about the positive assets in the state of New Jersey, No. 1 is always our highly skilled workforce. We know that is what attracts companies here. And, we always come out on top when it comes to the quality of our public schools, our kindergarten through 12th grade education.

“But with that public education costing more than $19,000 per pupil per year times 13 years, we have to question the return on investment when those graduating from high school are leaving the state of New Jersey because they cannot afford to be here.”

In response, Siekerka and the NJBIA included questions in this year’s survey of their member companies regarding workforce development and building relationships with local educational institutions, from elementary schools all the way up through community and vocational colleges.

“When students graduate, they are not always trained with the skills that they will need,” Siekerka said. “That is why businesses need to be there from the beginning, in kindergarten, even, helping to educate and being part of the (acquiring) of skills required for career paths that will exist tomorrow.”

“What is buried in the details is that they don’t know which opportunities exist,” Siekerka said. “That is why NJBIA’s Post-Secondary Education Task Force was launched earlier this year, to match education programs to private sector jobs and build a brand for New Jersey higher education and career pathways.

“We are focusing on efforts to make New Jersey more attractive to our future workforce, because millennial outmigration continues to impact the business community and our state.”

“This discussion shouldn’t just be about discussing the $15 minimum wage,” Siekerka said. “It should be a comprehensive discussion about lifting the wages of low wage earners and what we need to take into consideration when doing that.”

Nearly 64 percent of members surveys said the $15 minimum wage would impact their businesses, with 29 percent proposing the reduction of staff; 27 percent, the reduction of hours; 30 percent, raising prices; and 11 percent, automation.

“We don’t want to lose those first-time job entrants,” Siekerka said. “We need a training wage in the state of New Jersey.

“The most important part of the discussion is, when we lift the skill set of an entry-level worker, their wages often go with it. If we could focus on workforce development in New Jersey, we won’t have people getting stuck in entry-level positions.”

Siekerka also cited the concerns of member companies who do not necessarily employ minimum-wage positions.

“If you are at the counter at the Burger King, which I was at 16, in my first job, where I got my best experience in customer service and taking direction, learning how to show up on time and how to deal with people — if I’m getting paid $15 an hour, the paralegal at a law firm who is making $16 is going to go to her boss and say, ‘Time out, where’s my raise as well?’” Siekerka said. “Once you reset the entry-level position in the state of New Jersey, you reset every wage in the state of New Jersey.

“We will be using this information and data in our discussions as we go forward as to why we need to move forward responsibly in a manner that takes into account the economic impact for New Jersey business, residents and the overall economy.”

While the challenges may seem plenty, Siekerka said, New Jersey’s economy is fighting back.

“New Jersey businesses are bullish on their opportunities to do well in the coming year,” she said.

Following a year of increased sales in 2017 for 51 percent of those surveyed, companies are again anticipating greater sales this year.

Nearly 58 percent of member businesses said sales in 2018 would rise, while only 9 percent said sales would fall. This net positive of 49 percent is 11 percentage points higher than last year’s forecast of 38 percent.

Since employment rose by a net positive of 14 percent for members last year, companies again are anticipating greater hiring, wages and profits.

Nearly 31 percent of member businesses believe hiring will increase in 2018, while only 6 percent feel employment will fall. This 25 percent net positive represents a marked increase from 20 percent in 2017 and 15 percent in 2016.

“The No. 1 economic indicator in any state is job creation,” Siekerka said.

Furthermore, nearly 69 percent expect to increase wages in 2018, ranging between 1 percent to 4.9 percent.

“When we talk about issues lifting the wages of earners and the $15 minimum wage, it is important to take into consideration that New Jersey businesses are already remaining competitive in terms of increasing wages for their workers,” Siekerka said.

Member businesses showed a net positive of 18 percent in profits last year; therefore, 55 percent of members believe their profits will again increase in 2018, while only 12 percent feel they will fall. The net positive of 43 percent is much higher than the 31 percent and 25 percent members forecasted over the past two years.

Nearly 42 percent of members expect their industry to perform better in the first six months of 2018, compared with 14 percent who expect it to perform worse. This net positive of 28 percent is much higher than the 9 and 11 percent reported in the past two years’ surveys.

“This year, almost every industry is feeling good, save health care, due to all of the mergers and consolidations, as well as the Affordable Care Act and all of its issues and challenges in the industry today,” Siekerka said.

Overall, 33 percent of those surveyed expect the New Jersey economy to perform better in the first six months of 2018, with 24 percent feeling New Jersey has become a better place to live over the last year.

“This is New Jersey’s strongest economic year in quite a long time,” Siekerka said. “We should be very excited about that.”

State unemployment edges lower, despite a loss of jobs