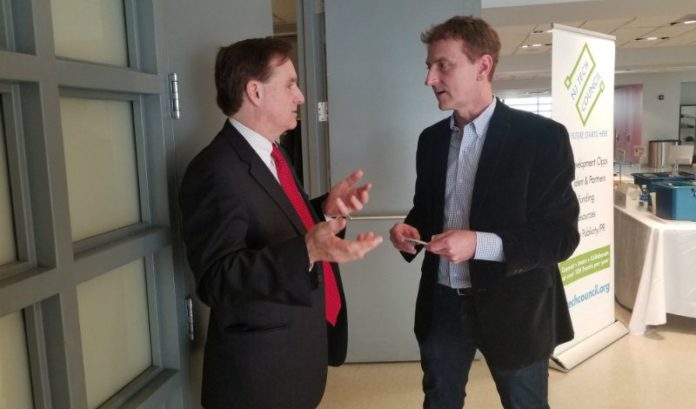 Sean O’Sullivan has only lived in New Jersey for two years, but the founder of Princeton-based SOSV, a venture capital and investment management firm, believes it is a state ripe for greater startup activity.

“New Jersey has the ingredients to be a great hub, as it has been in the past, for innovation and entrepreneurship,” he said. “Today, its batting average is not as good as it should be.”

O’Sullivan spoke at a New Jersey Tech Council event Thursday at the campus of the New Jersey Institute of Technology.

“It’s hard to understand as somebody coming into New Jersey and someone living in New Jersey for two years,” he said. “It has great universities, top-class research talent, an educated workforce, industrial leadership, a relatively healthy economy, great access to capital — all the things you would want for it to be a verdant landscape for scattered seeds to grow into tall trees.”

O’Sullivan started his first company in upstate New York, and believes areas outside Silicon Valley and New York City can be home to worthy innovation and startups.

That bodes well for the Garden State, which has been seeing a growth in innovation communities, from support groups to incubators and interest in home-grown accelerators.

“When I think about why accelerators are important, it’s because of the loneliness that it is, that you have to work your way through,” he said. “The doubt and the fear you have — it can be paralyzing. Accelerators and other mentoring services like incubators can really make teams be able to go further, faster. It’s not just mentoring one-to-one, its mentoring many-to-one.”

That is how his own company works.

There are many accelerators that start and shut down — but the rate of success of companies through accelerators has been increasing in recent years. A few years ago, only 6 percent of startups got Series A funding ($5 to $20 million, typically for more established companies) after going through an accelerator, and soon that number could be as high as 50 percent, according to information presented by O’Sullivan.

“An increasing number of companies are going further and faster by using accelerators,” he said.

It’s something he is familiar with.

The rankings have been produced by data company Crunchbase, and SOSV has also been ranked No. 1 for funding female founders by media site TechCrunch.

This, he said, despite not being the biggest company or investing at the level of bigger companies that invest in the billions.

Some of the companies he has funded and seen success with — for example Qidni Labs, which produces artificial kidneys — do not take long to find success.

“This is not done by Johns Hopkins or by some multigovernment research consortium, or anything over a 10-year period. This was done by a guy working on the problem for 15 years, but who never had someone to throw the $250,000 his way that would help make this possible,” O’Sullivan said.

He also described the lucrative alternative foods market — a notable market for a state like New Jersey — creating products like eggs without chickens and meat without cows.

“This is technology that previously had been used by all the pharma companies,” O’Sullivan said. “New Jersey is No. 1 in employees in the pharma industry. Well, that technology that you are using — bio reactors and synthetic biology to make drugs like insulin, or other proteins that are normally grown by your body, animals or plants — you can create those same proteins to really transform the world.”

This is going to make animal agriculture far less important, solving both labor and environmental problems.

His company has also supported, for example, a startup that produces ketchup from vegetables rather than corn syrup.

It’s an area O’Sullivan sees a lot of growth from and global benefit for.

“Societally, we need to change the food options for people, and need to have healthier and better food economy in the world,” he said.