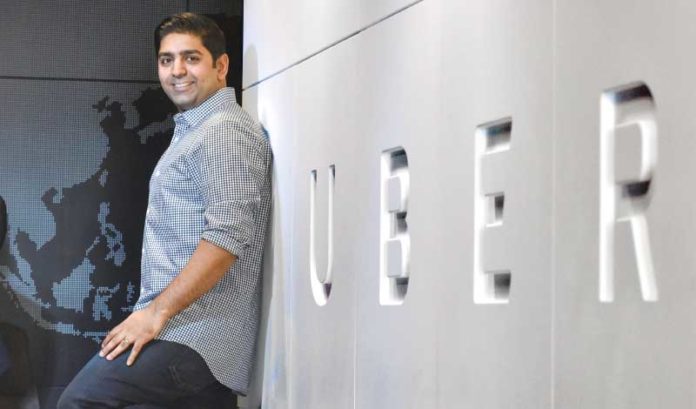 Perhaps lost in the recent barrage of internal problems — such as the ousting of its CEO and co-founder, as well as the cover-up of a year-old data breach — there’s this one tidbit about Uber:

The company is on the upswing in New Jersey, poised to serve 2 million customers in the state since it started here in 2013.

“New Jersey is an important market, not just for the northeast, but across North America, and it ranks alongside some of our top U.S. cities and markets in terms of the regular amounts of trips,” Maredia told ROI-NJ in his first public interview since being promoted in May.

“On its own, New Jersey consistently ranks in the Top 10 markets for Uber in the U.S. and Canada, right up alongside major metropolitan areas like Miami, Boston or Washington, D.C.”

Since Uber’s New Jersey launch in November 2013, millions of riders have used the service to get in and out of bordering metros, international visitors use it from Newark Liberty International Airport and riders who need to get to the trains have contributed to the growth.

There are currently 1.5 million riders using Uber on a regular basis in New Jersey, meaning they have used the service in the past 90 days, and the company projects that number will reach 2 million in January.

All of this business allows the company to use the state in different ways, including pilot programs and business partnerships that can be brought to other markets.

Some of the company’s first-of-their-kind partnerships have started in New Jersey: for example, free rides from bars and restaurants in Evesham Township, and coordinating patient visits at Hackensack Meridian Health’s University Medical Center in Hackensack.

Uber also has developed relationships with the NAACP (paying referral fees to the organization in an effort to add 3,000 drivers and provide jobs to low-income earners in the state), MetLife Stadium (to be the preferred rideshare partner during events) and the city of Summit (to alleviate the need for parking at the train station).

One of the latest involves real estate, as Uber has worked with Capodagli Property Co. to provide $100 in Uber credits to residents of Meridia Living apartments in an effort to alleviate parking issues.

Working with developers for more pickup/drop-off zones and monthly stipends is a growth area, and one happening organically in densely populated areas, Maredia said.

The goal is to help remove the burden for parking, an increasing problem in the state’s booming northeast region, and allow space in densely populated areas for more amenities or to benefit the community at large, he added.

“That is a trend we are starting to see materialize,” he said. “New Jersey is one of the places where it’s starting to happen.”

Maredia said that, while New Jersey has been the site of some pilots, it is also important enough to be cautious about new programs.

The company now has more than 100 business and institutional clients in New Jersey using the Uber for Business platform, including Rutgers, MLB Network and Reckitt Benckiser.

Uber also has its sights set on working with NJ Transit and the Port Authority of New York and New Jersey.

“What we are seeing today is a significant number of rides start or end near NJ Transit or PATH,” Maredia said. “So, what we are hoping to do is have constructive conversations about how we could formally work with public transit or transportation agencies.”

“That not only helps in terms of access to reliable transportation options in New Jersey, (it helps) income opportunities for drivers, which also helps economic opportunity in those communities, because people from other places can come to visit New Jersey (and) are also going to be able to get an Uber there. So, if you talk about the state’s broader economic goals, we feel like in small ways we can help advance urban mobility (and) can have benefits across the broader ecosystem in the state and the state’s broader economic goals.”

Uber has accomplished all this while overcoming pushback from taxi drivers in Newark and Elizabeth (who were upset over the presence of Uber and Lyft at Newark airport) and Atlantic City (for adding competition in an already sluggish region) in the past two years.

Ironically, the most popular destination in New Jersey, according to a recent report, is Harrah’s Resort Hotel & Casino in Atlantic City. The same report stated the earliest riders in a day are in New Jersey.

Trenton tried to help ease some of the tension by creating statewide protections for riders, and regulations for drivers that include background checks and insurance requirements — easing future growth for the ride-sharing companies.

But the legislation has helped open the door for even more ride-sharing opportunities.

“Now that we have a framework setup, similar to nearly every other city and state in the U.S., including insurance and background checks, things like a zero-tolerance policy, we think those are good things and are going to help options like Uber become more available,” Maredia said.

That, despite internal and international troubles the company has faced in recent years — from its battle in London and competition with the historic yellow cabs of New York City, to the internal upheaval from its recently ousted CEO and co-founder, Travis Kalanick, and loss of other executives, who left after Kalanick.

Maredia remains optimistic about growing the brand, drawing from his experience as a rider and focusing on understanding the role of ride-sharing on the greater economy.

Uber’s newest feature, uberPOOL, is helping transform the company from ride-hailing to ride-sharing.

The feature, which launched in 2016, allows drivers to pick up multiple riders along the way. This makes the trips longer, but also far less expensive.

An Uber spokesperson said the idea is catching on, as it already is responsible for 25 percent of the rides in the state.

And there appears to be plenty of room for growth.

McKinsey & Co., in its July report on the industry, said ride-sharing accounts for only 1 percent of miles driven in 2016 in the U.S.

Its pace of growth, considering what a short time the concept has existed for, is steep.

“In December 2013, Lyft and Uber combined for approximately 30 million (vehicle miles traveled) per month in the United States,” the report said. “Three years later, the two had reached 500 million U.S. VMT per month — a compound annual growth rate of more than 150 percent, which resulted in over $10 billion in revenues for 2016.”

Maredia is confident use in New Jersey will continue to expand.

“We are seeing that the demand for Uber in New Jersey continues to grow,” he said. “The reason for that, in my view, is we serve drivers and riders and communities well. Ultimately, we are going to be judged on that.

“As a company, we are focused on doing the right thing and building a company that drivers — and riders who use Uber — can be proud of. We definitely have work to do there, we have been honest about that, and are working hard to do so.”