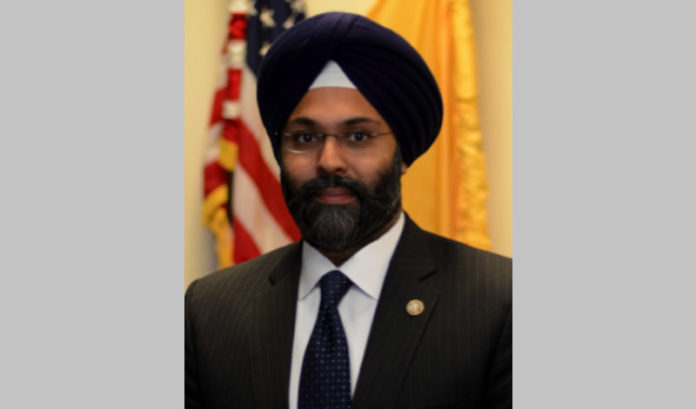 (Editor’s note: This report was updated at 3:30 p.m. with additional information.)

Grewal would be the first Sikh to be selected to the position in the state’s history, as well as the first Sikh state attorney general in U.S. history.

The news was first reported by InsiderNJ on Tuesday morning.

The appointment appears to be in line with Murphy’s campaign promise to ensure his administration reflects the demographics of the state, as well as validates a sentiment of a growing South Asian political presence in the state.

When asked why Grewal was chosen, other than being a minority official, one insider, who was not authorized to speak on the record, said he was “eminently qualified.”

“He has dedicated his entire career to being a prosecutor and to public service,” the insider said. “He’s not a politician. He’s purely a prosecutorial lawyer.”

Hoboken Mayor-elect Ravinder Bhalla, a fellow lawyer and a childhood friend of Grewal, congratulated him on the appointment.

“The governor-elect has picked a highly qualified professional in Grewal,” Bhalla told ROI-NJ. “Grewal’s qualifications are impeccable. I am happy that the governor-elect decided to appoint someone based on the merits.”

“When you talk about the things going on around the country right now, who is better qualified than a measured prosecutor?” the insider said. “What you see here is Gov.-elect Murphy satisfying his campaign promise that the attorney general would be somebody who is not only a distinguished lawyer, but someone who has personal experience with a lot of issues that the diverse residents of New Jersey face. Having that cultural perspective provides you with vision and foresight to do your job better.”

The comments were echoed by Simran Jeet Singh, a well-known voice advocating on behalf of the Sikh community.

“In this political moment where people are constantly being told by our government and by our fellow Americans that we don’t belong — it is incredibly powerful to have leaders step forward who are professionals in their own right, but have a background and understanding of messages of hate,” he said.

Singh is an assistant professor in the Department of Religion at Trinity University and senior religion fellow for the Sikh Coalition.

The Sikh Coalition, which advocates for greater awareness of the culture, said it believed Grewal to be the first Sikh state-level attorney general in the country.

“While not a state AG, Preet Bharara was the U.S. Attorney for the Eastern District of New York prior to President (Donald) Trump’s arrival,” a spokesman told ROI-NJ. “Mr. Bharara comes from a Sikh family. We know that there are a few assistant U.S. Attorneys in D.C., Chicago and NYC, but we are not aware of anything else.”

In announcing his choice of Grewal later Tuesday, Murphy said he indeed would be the first Sikh to hold such a position.

I am truly honored to nominate Bergen County Prosecutor Gurbir Grewal to the position of Attorney General. If confirmed, he will be the first Sikh-American Attorney General in American history. Thank you, Gurbir, for accepting the call to serve NJ. pic.twitter.com/I33xdlGqPA

Singh said it appears that, after more than a century since Sikhs first arrived on the West Coast, the community is finally arriving on the political scene.

“As a historian, I have to point out that Sikhs have been engaged in politics in America for a long time,” Singh said. “That being said, this is an inflection point for the Sikh community. We are, after more than 100 years, gaining community power here in the U.S.”

“It gives me hope for the future, especially as we think about the kinds of signals it sends to our children. That you don’t have to look a certain way or don’t have to conform to particular appearances to succeed.”

“The appointment of Gurbir Grewal is another landmark moment for the Sikh-American community,” he said. “While breaking down barriers for the next generation of Sikh leaders, he is reminding all Americans that diversity is our nation’s greatest strength.”