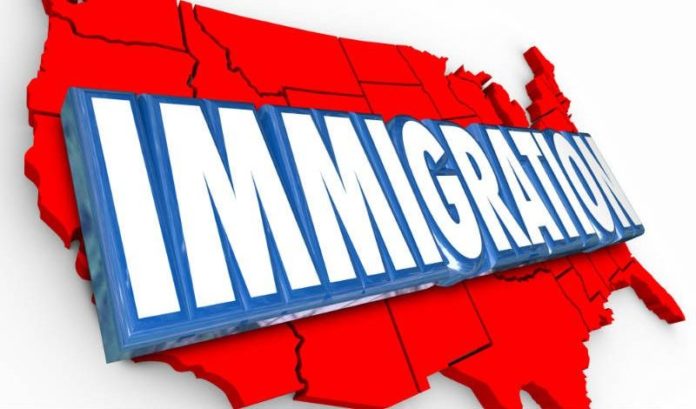 With what’s coming down from the administration and policymakers on the hill, unions that have been in a years-long fight for immigrant labor rights in New Jersey are finding themselves in an uphill battle these days.

But Kevin Brown, the New Jersey state director of one of the biggest unions representing immigrant workers in the country, 32BJ Service Employees International Union, nonetheless has an optimism about that crusade.

Call it a perk of the job.

“I’m always optimistic; as a trade unionist in the 21st century in America, you have to be,” he said.

Brown, New Jersey state director of the largest property service workers union in the country, spoke like his union had the wind at his back about the ongoing fight to protect workers under Temporary Protected Status as well as threatened immigration policies such as Deferred Action for Childhood Arrivals, or DACA.

Members of the union have traveled to Washington, D.C., to rally against “anti-immigrant positions,” such as President Donald Trump’s administration ending Temporary Protected Status for Haitians and Nicaraguans living in the United States, giving them months to leave the country.

This provisional immigration status is granted to those whose countries have experienced natural disasters or other destabilizing conditions. Hondurans and El Salvadorans also have been granted it, though their status is also in flux.

“This is a huge issue for employers in New Jersey, because they do employ many of these people legally,” Brown said. “And, if the program ends, they won’t be able to do that anymore — for so many people providing important jobs here.”

Brown cites reports of nearly 14,000 immigrants with Temporary Protected Status living in the Garden State, with another nearly 9,000 children born here to parents with that status. The population, as a whole, contributes $872.6 million to New Jersey’s economy, according to the think tank Center for American Progress.

Unions such as 32BJ SEIU also have made a case for the protection of DACA, an Obama-era program that allowed undocumented immigrants brought to the U.S. as children to avoid deportation.

“There’s not as many DACA folks working today, but some are; and those that are remain of critical importance to employers, too,” Brown said. “These people, like those under Temporary Protected Status, need to be able to stay here and work here.”

Brown said the janitorial profession has one of the highest amounts of immigrant workers, but industries such as construction, hotels and restaurants also benefit from this labor pool.

The agricultural sector has a well-known connection to immigrant labor. And though it’s a population that’s more often undocumented than under the aforementioned legal immigration status programs, their uneasiness is no boon to the industry.

Meghan Hurley, a spokeswoman for a New Jersey membership-based farmworker advocacy organization, said there are thousands of migrant workers employed in the around 300 farms in South Jersey, where her organization is based.

The Farmworker Support Committee, which goes by the Spanish name El Comite de Apoyo a los Trabajadores Agricolas, has since the beginning of its existence advocated for comprehensive immigration reform. Hurley said the platform just happens to be more pressing than ever today.

“We strongly disagree with what’s coming out of the administration,” she said. “It’s promoting an agenda against aimed at weakening rights of the immigrant community, which is going to hurt local industry.”

There may be signs of that already, according to Hurley.

“We’ve heard of a few recent instances of blueberry farms that just didn’t have enough workers for the season,” she said.

The difference between labor unions pushing for immigration reform and other groups is that these organizations are simultaneously agitating for better working conditions for this population. Hurley spoke to the importance of that for farmworkers, whom she said are subject to harsh heat, back-breaking work and pay that’s paltry at best.

“We want immigration reform along with stronger worker rights for this industry, so it’s actually a fair place for people to work,” she said.

Brown takes a strong position on the topic, though not one unexpected for a union leader.

“The common notion is that these people are exploited because of their status,” he said. “It’s true to some extent, but it’s often exaggerated — that is, disproportionately to the amount that other workers are exploited, too. Basically, workers are exploited as a whole in the service economy, and increasingly in the construction trade as well as manufacturing.”

That’s not to say labor organizations jostling for immigrant protections in an unfriendly climate don’t have sympathies for those communities that go beyond trade union obligations.

“Especially with DACA recipients, these are people who arrived here when they were 2 or 3 years old and it’s the only country they know,” Brown said. “They’re American as much as anyone else.”

The use of off-the-books undocumented workers by construction contractors has created a precarious situation, according to Jack Kocsis, CEO of the Associated Construction Contractors of New Jersey.

“In the construction industry, we are continually fighting against an underground economy in which unscrupulous contractors lowball bids on projects because they are paying their workers under the table, or misclassifying their workers as independent contractors,” he said.

So, when it comes to the intersection of politics and this industry, this is where the focus lies for Kocsis and his organization.

“The federal policies that concern us, in relation to wiping out the underground economy, are those in the U.S. Treasury, the IRS, that crack down on employers who try to avoid paying taxes,” Kocsis said.

“We are working to get New Jersey to sign a memorandum with the Treasury so the state and the feds can alert each other when they discover a bad actor. We’re one of the few states that don’t have (that) in place.”

Unions, as well as the contractors that work with them, agree on the seriousness of this issue.

“I’ve known numerous projects — even high-profile projects — in which you see individuals working who are not on the payroll,” Paul Roldan of Laborers Northern New Jersey Local 3 said. “We need contractors who do this to be investigated and penalized more vigorously.”